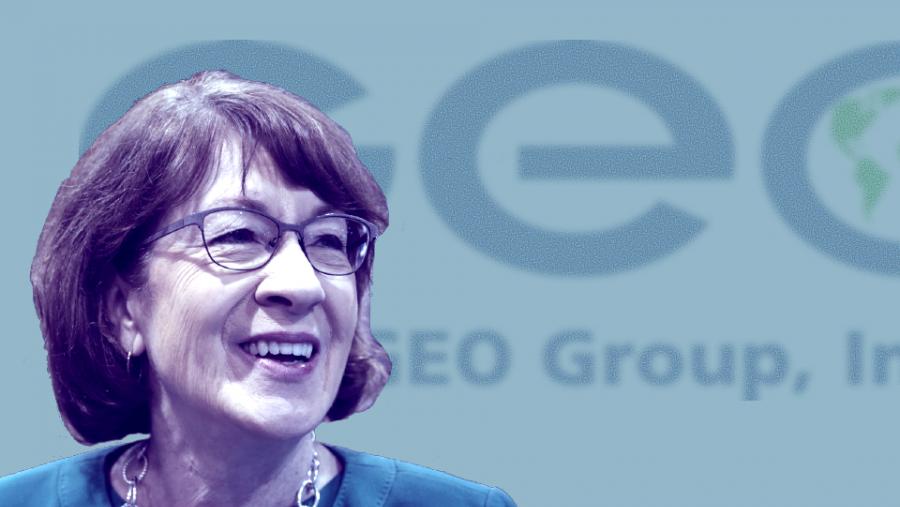 1820 PAC, a single-candidate super PAC formed in March 2019 to help Collins's re-election bid, released the names of its donors from the second half of last year on January 31. Among them is GEO Acquisition II, a wholly owned subsidiary of GEO Group, which gave $12,500 last August.

The donation is part of nearly $1.9 million that GEO Group and its subsidiaries have given to super PACs since 2015, according to a CMD analysis of campaign finance disclosures.

1820 PAC also got $150,000 from the Society of Young Women Scientist and Engineers LLC, a Hawaii-based entity that appears to be a shell company created to hide the identities of its donors. Other large sums came from Blackstone CEO Stephen Schwartzman ($500,000), finance executive Warren Stephens ($250,000), the conservative Newsmax Media company ($50,000), and James Davis, the chairman of New Balance ($25,000).

In October 2018, Newsmax Media CEO Christopher Ruddy wrote a column called "Susan Collins Has 'Clear Eyes, Full Heart,'" praising her for her vote to confirm Kavanaugh and crowning her as a "courageous champion." Since then, the purportedly independent publication has run stories about Collins' 2020 foes, including one titled, "Left, Soros Pour Money Into Maine to Defeat Susan Collins."

"You have to know the news is fake when the 'news organization' is a contributor to a politician's wallet," Maria Bustillos, editor of Popula and a Columbia Journalism Review columnist, told CMD. "Newsmax should be held to account, and so should Senator Collins."

A Daily Beast report linked 1820 PAC to the U.S. Chamber of Commerce, a heavy political spender. Scott Reed, a senior political strategist for the Chamber, was the PAC's first donor,  contributing $1,000 on March 22, 2019.

1820 PAC has spent $700,000 on ads supporting Collins so far. Collins's Senate staff and GEO Group did not respond to emails seeking comment.

In August 2016, a day after the Obama administration announced it would end the use of private prisons by the federal government, GEO Group subsidiary GEO Corrections Holdings gave $100,000 to the pro-Trump super PAC Rebuilding America Now. It would donate another $125,000 one week before the general presidential election. Trump won, GEO Group's stock price rose 21 percent the next day, and the subsidiary pitched in $250,000 for Trump's inauguration.

GEO Group, Immigration and Customs Enforcement's (ICE) biggest contractor by far, saw its contracts shoot up under the Trump administration, which reversed Obama's private prison policy and ramped up the detention of undocumented immigrants.

Campaign finance law prohibits government contractors from directly spending money on federal elections. Corporate PACs may donate, and non-contracting companies can give directly to outside spending groups, but contractors are prohibited. So in late 2016, government watchdog Campaign Legal Center (CLC) filed a complaint with the Federal Election Commission (FEC) against GEO Group. CLC subsequently sued the FEC to enforce the law, but to date GEO Group has paid no penalty for its donations and continues to fund conservative super PACs such as the Congressional Leadership Fund.

"The FEC sat on our complaint for years, and has now lost its quorum," Brendan Fischer, director of federal reform at the Campaign Legal Center, told CMD. "In the meantime, GEO has continued to make big donations using corporate subsidiaries. GEO is apparently anticipating that the costs of any eventual FEC enforcement action won’t outweigh the benefits of buying influence with super PAC donations."

Even with a quorum, the likelihood of the perennially gridlocked FEC ruling against GEO Group would be slim, but since last September the agency has had only three commissioners and thus cannot make any official rulings, as the required number of votes for any action is four.

While the FEC has ignored CLC's effort to enforce the law with respect to the private prison giant, FEC did take the rare step of fining a Boston-based construction company and government contractor for donating $200,000 to a pro-Hillary Clinton super PAC in 2015. The company settled the case, paying a $34,000 fine.

"The reason that federal contractors have been barred from making contributions for the past 75 years is to prevent pay-to-play in the contracting process," writes CLC. "Public officials are supposed to make contracting decisions based on what is best for the public, not based on who spent the most money getting them elected. GEO Group's illegal donations have the appearance of a pay-to-play."

Donations to Other Super PACs

With a green light from the FEC, GEO Group has continued to make five- and six-figure donations to conservative super PACs. Since 2015, the company and two of its subsidiaries have given $550,000 to the Senate Leadership Fund, $325,000 to the Congressional Leadership Fund, and $275,000 to New Republican PAC, the super PAC that backed successful GOP Senate candidate Rick Scott of Florida, who was previously governor of the state.

Rubio has a history of very close ties to GEO Group, having received campaign donations and outside support from Zoley and other GEO Group executives, and having been associated with a state legislative giveaway to the company. Former state Sen. Don Gaetz, the father of Rep. Matt Gaetz, was also implicated.

GEO Group is a longtime member of ALEC, a corporate bill mill that brings together lobbyists and state lawmakers to create model legislation. ALEC organized a confidential "border tour" last August, according to documents obtained by CMD.