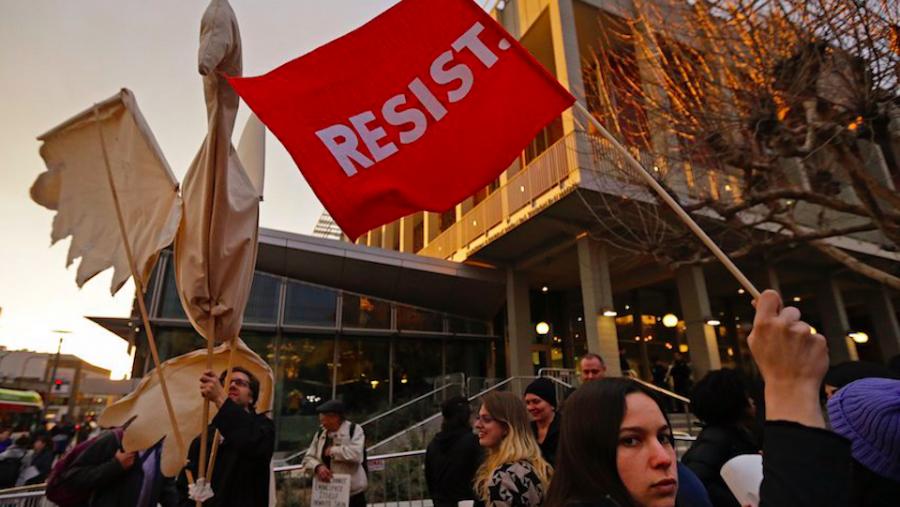 by David Armiak and Ralph Wilson

Over the last few years, right-wing groups have cried that there is a "free speech crisis" on campuses and have pushed state governments to pass legislation that many professors and civil liberties advocates argue only makes the situation worse.

Speech First is the latest group to arise to challenge university speech policies. Launched in late 2017, it claims to be a "membership association of students, parents, faculty, alumni, and concerned citizens," but is in reality managed by a right-wing operative and funded by the Koch brothers' dark money network, a joint investigation by the Center for Media and Democracy (CMD) and the Corporate Genome Project (CGP) has found.

While other organizations, such as the Christian Right hate group Alliance Defending Freedom, have been challenging campus speech policies for years, Speech First is the only group to be specifically set up for this purpose. Its aim is to show universities that "shutting down unwanted speech will no longer be tolerated," says founding executive director Nicole Neily.

The "shutting down of unwanted speech" on campuses is a common talking point of the wider narrative spun by groups like the Goldwater Institute and the American Legislative Exchange Council (ALEC), which have produced model legislation that restricts the right to protest and, in some cases, even criminalizes or academically sanctions student dissent.

Dissatisfied with what they perceive to be a Left bias at universities, right-wing groups with funding from the billionaire Koch brothers and the Bradley Foundation have sought to create space on campuses for white nationalists. The ALEC and Goldwater bills aim to address a free speech "crisis" on college campuses, often manufactured by right-wing groups sending in outside racist provocateurs.

Bradley prize recipient and noted white nationalist Charles Murray is one such speaker. After a speaking event at Middlebury College was shut down by students and violence erupted in March 2017, Murray became a martyr for the "crisis" as the news spread across right-wing media.

ALEC, Goldwater, and Murray's employer, the American Enterprise Institute, all receive major funding from the Kochs, Bradley, and DonorsTrust, the preferred conduit of the Koch donor network.

Speech First has joined the fray by filing several lawsuits premised on the claim that the systems for reporting incidents of bias and hate on campuses constitute a violation of free speech. Their request for an injunction against the University of Michigan for its campus policy on harassment and bullying was rejected by a district court, but not before scaring the university into changing its policy in such a way that allows hate speech to go unchecked.

However, Judge Yeakel ruled on June 4 that the students and Speech First lacked standing to sue because "the students' self-censorship is not based on a well-founded threat of punishment under the University policies that is not 'imaginary or wholly speculative.'"

Speech First also sued the University of Illinois on May 30 seeking to eliminate the university's leafleting policy, its prohibition on "bias motivated incidents," and its "no contact directive" policy, which functions similar to a restraining order.

A week later, the "College Fix" website published a report on bias complaints in an attempt to support the suit as part of its series on "bias reporting systems on campuses across America." College Fix is a project of the Student Free Press Association, a nonprofit that has received funding from the Charles Koch Foundation, the Bradley Foundation, and DonorsTrust.

Speech First presents itself as a membership association funded by dues, but fails to note that both its operations and its publicity, managed by the PR firm Creative Response Concepts (CRC), are only made possible by the Kochs' dark money machine.

According to its 2017 tax filing, the Judicial Education Project (JEP) donated $250,000 to Speech First, and $720,000 to their PR firm, Creative Response Solutions. JEP, in turn, received $8.8 million, or 93 percent, of its total 2017 revenues from the Koch brothers donor network's ATM, DonorsTrust. DonorsTrust serves as an anonymous donor conduit, so the actual source of the money is unknown.

JEP, the tax-exempt sister organization of the Judicial Crisis Network (JCN), unleashed "significant education and media efforts" to get Gorsuch confirmed and has filed a large number of Supreme Court amicus briefs, including in Janus v. AFSCME and Gil v. Whitford. (1)

CRC's clients also include many of the groups in a network coordinated by Leonard Leo seeking a right-wing capture of the courts, including the Federalist Society, Judicial Crisis Network, BH Fund, Freedom and Opportunity Fund, and America Engaged. An analysis of tax filings shows that the Federalist Society paid CRC $3.9 million between 2014-2016 for "media training," and the Judicial Crisis Network (JCN) gave them $4.4 million between 2015 and 2016 for "public relations." JCN's sister organization, the Judicial Education Project (JEP) also contracted with CRC for over $2.5 million between 2015 and 2017.

With the millions Leo's groups pay out to CRC, it is no wonder "CRC's president, Greg Mueller, describes himself as a friend of Leo."

Other CRC clients include the Kochs' Americans for Prosperity, Grover Norquist's Americans for Tax Reform, the anti-immigration group Numbers USA, and the Republican National Committee.

Before joining Speech First, Neily was a senior fellow at Independent Women's Forum (IWF), a pay-to-play front group funded by the Bradley Foundation, the Kochs, the Sarah Scaife Foundation, and others.

She also served as President of the Franklin Center, bankrolled by the Kochs' DonorsTrust and Donors Capital Fund and the Bradley Foundation. Franklin, recently rebranded as the Franklin New Network, manages right-wing media sites collectively hosted on The Center Square (formerly Watchdog.org).

Between 2014 and 2016, Neily was VP of Dezenhall Resources, a PR firm known as a "pit bull" for its aggressive tactics on behalf of corporate clients. Dezenhall is a documented corporate sponsor of ALEC, serving on its Energy, Environment, and Agriculture Taskforce alongside Koch Industries.

(1) JEP also paid $800,000 to the George Mason University Foundation in 2017. Though it is not clear what this donation was for, it is worth observing that Speech First board member Adam White runs GMU's C. Boyden Grey Center for the Study of the Administrative State, which was founded with a $30 million pledge from the Charles Koch Foundation and another anonymous donor that was later revealed to be the BH Fund, a front group operated by key members of the Federalist Society. The BH Fund's sister organization, BH Group, received $1.4 million in 2017 from JEP and is under scrutiny for a $1 million donation to the Trump Inaugural Committee.