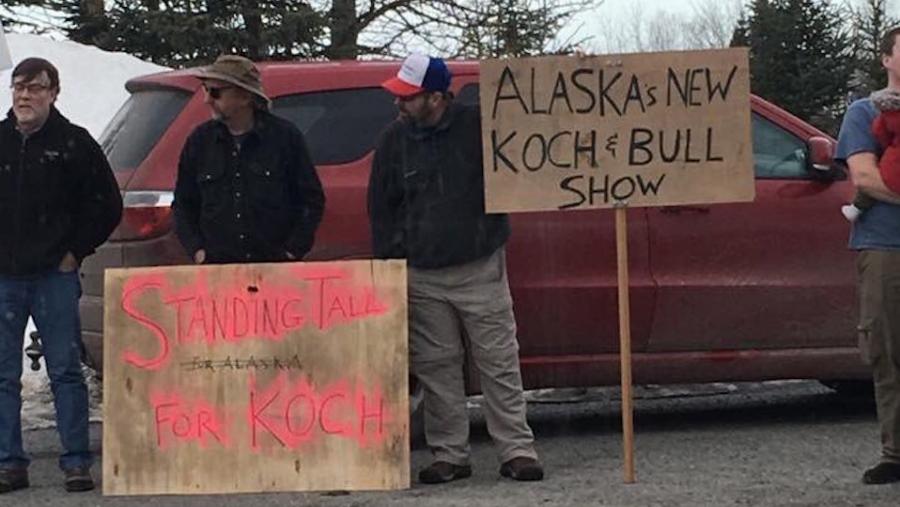 By Don Weiner and Arn Pearson

To some it may sound incredible, but Alaska Republican Governor Mike Dunleavy let the Kochs' political field operation, Americans for Prosperity-Alaska, sponsor and pay for statewide field hearings on his controversial tax and budget proposal -- and impose strict limits on attendance and media coverage.

The Governor's budget, which proposes deep cuts in education, health, and social services and is supported by AFP, looks like it will be replaced by a Senate bill that cuts spending, but not as deeply as Dunleavy's proposal.

Hosted in Fairbanks, Anchorage, Wasilla, Kenai, and Nome this spring, the AFP-run panels were the only public budget hearings held outside of the capitol. The group says it spent between $5,000 and $10,000 on the events.

Despite being attended and promoted by state officials, including the governor, attorney general, and commissioner of revenue, the sessions were billed as "private events" on Americans for Prosperity's (AFP) invitation page, which required registration with AFP, a ban on signs, and agreement to AFP's "terms and conditions."

Anyone wishing to attend the AFP events had to agree to give AFP the sole right to distribute or publish any and all audio or visual recordings of the proceedings in whatever way AFP saw fit, including use of their personal statements.

In addition, AFP required public attendees to "agree that you will not record, reproduce, or transmit from the place of performance" any of the proceedings without prior written permission of AFP.

Anyone violating AFP's gag rule could "be denied admission to or be asked to leave the event."

The AFP's Anchorage budget roadshow event on March 26 drew some 300 protesters, and two women were removed by security when they held up a banner that read "Recall Dunleavy," while the governor sat on stage flanked by officials from AFP and the Koch-funded State Policy Network affiliate, Alaska Policy Forum.

In addition, Dunleavy has hired Donna Arduin at the hefty pricetag of $195,000 per year to be his budget director. Arduin is a partner in Arduin, Laffer & Moore Econometrics, the team of supply-side economists of choice for the Koch-funded American Legislative Exchange Council (ALEC), and a number of other Republican governors.

Alaska's Senate Democrats strenuously objected to the unusual arrangement with AFP and called on Governor Dunleavy to cancel the events.

"Alaska's governor should be open, transparent, and dedicated to serving Alaskans, not multi-billionaires from Kansas and their political agenda," said Senate Minority Leader Tom Begich.

"Using public resources to publicize a private agenda driven event all while requiring rural residents to sign away their rights is completely uncalled for," wrote Sen. Donny Olson (D-Golovin).

AFP was founded by the billionaire brothers David and Charles Koch, the owners of Koch Industries, and spends millions every year on political and issue ads, direct mail campaigns, candidate campaigns, and direct lobbying.

The Republican Governors Association (RGA) pumped more than $2.7 million into independent expenditures in support of Dunleavy last year. Koch Industries was the RGA's fourth largest contributor in the 2018 election cycle, donating $800,000 to the political committee.

Correction: The Senate Minority Leader's name has been corrected.