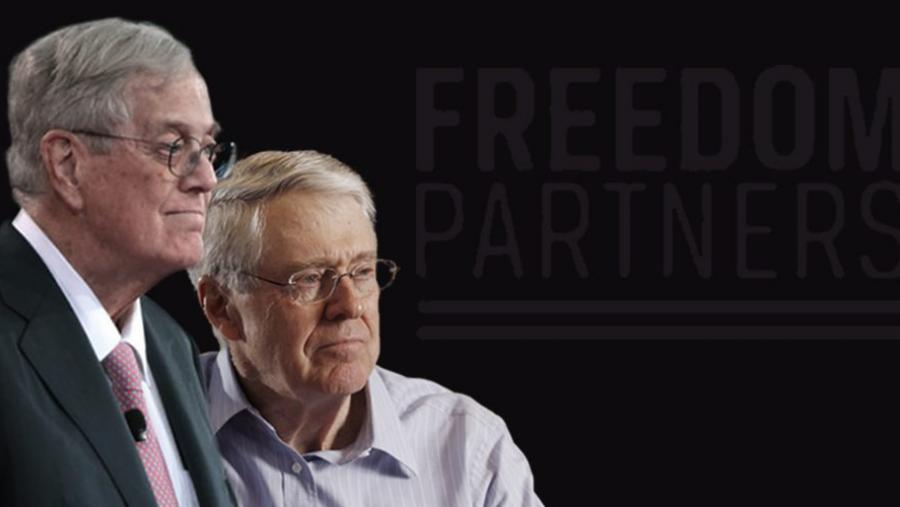 The billionaire Koch brothers' primary fundraising vehicle called the Freedom Partners Chamber of Commerce, raised $127.3 million and spent over $115 million in 2017 according to an IRS 990 disclosure obtained by the Center for Media and Democracy. The amount raised is down $20 million from 2016.

Freedom Partners, officially organized as a 501 (c)(6) trade association for the purpose of "promoting economic freedom," funnels money from the Koch Network of billionaire donors to a growing number of political advocacy organizations controlled by Koch operatives.

These operatives make a good living. Freedom Partners reports $18.7 million in compensation, salaries and wages presumably for the groups in the network, a whopping 15 percent of the total raised.

$47.5 Million to Americans for Prosperity

The largest beneficiary of Freedom Partner funding by far was the Koch political advocacy group Americans for Prosperity (AFP), which received $47.5 million in general support. This is only a million shy of what AFP received in 2016, a presidential election year. AFP has led the charge against the Affordable Care Act and for the massive corporate tax cuts passed by the Trump administration in 2017.

AFP funds big political ad campaigns each election cycle and lists operations in 38 states on its website. President Tim Phillips says it employs "hundreds of staffers" and has "thousands of volunteers," even though most are paid door-knockers.

The Kochs reorganized their political network in September of 2016 to make their veterans' front group Concerned Veterans for America (CVA), their Latino front group Libre Initiative, and their youth front group Generation Opportunity sub-projects of AFP. For the first time since their founding, CVA and Libre Initiative did not receive grants from Freedom Partners in 2017, but Generation Opportunity received $75,000 under its legal name: YEM Trust.

The Kochs' political data firm i360 received $15.6 million and its public relations firm In Pursuit Of received close to $8 million in 2017.

CMD's recent exposé on i360 featured in Salon detailed how the data operation has developed personality profiles on 89 percent of Americans with "1,800 unique data points on each identified individual." This makes i360 the "best in the business" at providing the GOP with voter information, according to one GOP campaign manager.

In Pursuit Of provides public relations services, such as ad creation and ad buys, to the Koch political network. James Davis, the former vice president of Freedom Partners, runs the media agency.

Of all these, the most money was sent to Freedom Partners Shared Services, the Kochs' human resources and recruitment agency, which received $18.9 million. C-corporations KNSLT, Inc and THOCO reported $12.1 million and $10.5 million in income on the Freedom Partners IRS 990.