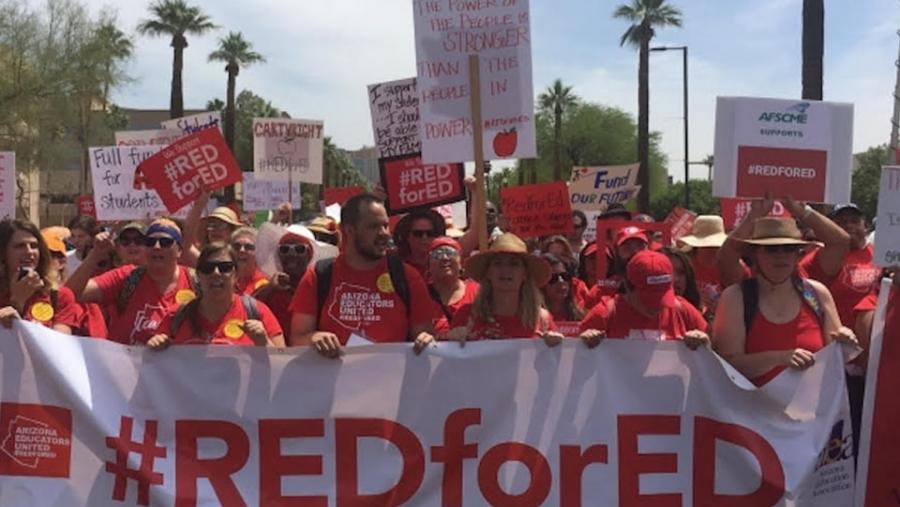 By Scott Zimmerman and David Armiak

Just days before the start of the school year, the Arizona Supreme Court dealt a big blow to public education when it knocked Proposition 207 off the ballot. The voter initiative would have provided $690 million more per year for Arizona's revenue-starved schools, but the Court sided with the Arizona Chamber of Commerce's technical challenge to wording in the ballot description used in public pamphlets.

The unprecedented ruling was made possible thanks to controversial moves by Gov. Doug Ducey and his GOP allies in the legislature over the past two years that packed the Supreme Court with Ducey nominees and put new restrictions on ballot measures.

Arizona schools have seen a billion dollars in cuts to education funding since 2008, according to The Arizona Republic. In response to this lack of funding, a coalition of education groups, including the Arizona Education Association and the #RedforEd movement, organized Arizona teachers to collect 270,000 signatures in order to put Prop. 207, #INVESTinED, on the ballot this November.

Corporations funneled over a million dollars into the Chamber's campaign for a multifaceted attack on the proposition. The group produced a social media campaign, created a website, and launched a lawsuit that, with help from the Arizona Supreme Court, ultimately defeated the #INVESTinED initiative.

But the influence of the right-wing Goldwater Institute on the Supreme Court should not be overlooked. The Goldwater Institute is an affiliate of the State Policy Network and is heavily funded by Koch-network donors, the Bradley Foundation, and other national corporate benefactors.

In January 2016, Republican Gov. Doug Ducey appointed Clint Bolick, Goldwater's vice president for litigation and past president of the Alliance for School Choice, to the Supreme Court. The self-described "activist" had no judicial experience but a long history of suing states and the federal government, and signaled upon his appointment that he would not abandon his activist ways.

"I think any judge is going to be an advocate for his or her interpretation of the law," Bolick told the Arizona Daily Sun.

Even the Goldwater Institute flagged Bolick's activist leanings. "As his record makes clear, Bolick is not an advocate of 'judicial restraint' or minimalism in the constellation of right-leaning stars," the group wrote on its website.

Later that year, Ducey signed a bill into law that increased the Court's size from five to seven justices. At the time, Chief Justice Bales called the decision "not warranted when other court-related needs are underfunded." But ultimately, Ducey was able to pull off what critics called a "brazen court-packing scheme."

The court expansion bill was sponsored by Speaker Pro Tempore J.D. Mesnard, who has close ties to Goldwater and went to work for the right-wing National Center for Policy Analysis right out of college.

In 2017, Ducey signed into law another controversial bill, backed by the Chamber and passed on party lines, that requires "strict compliance" with ballot laws for voter initiatives instead of the existing "substantial compliance" standard. That neat new legal trick enabled the Chamber to bring its technical challenge against Prop. 207, and the Goldwater Institute filed an amicus brief defending the law's constitutionality.

Chief Justice Scott Bales authored the Prop. 207 ruling saying that the "100-word description" presented to those who signed the petition "did not accurately describe the proposition." But the Court has not released a full opinion or vote count so far. Yet somehow Gov. Ducey's campaign staff has inside information to know that it was a 5-2 vote.

The Koch-funded Americans for Prosperity (AFP) was "filled with glee" at the striking down of the school funding measure, which would have increased income taxes on the wealthy, and posted a video of a representative "cartwheel[ing] down his hallway," according to the Phoenix New Times.

But the ruling has outraged and reignited the public education movement in Arizona. "The public understands what this initiative would do," Rebecca Rios, the State House Democratic leader, said in a statement. "Opponents used a technicality and a Supreme Court stacked by Governor Ducey to take away their voice."

On Tuesday of last week, teachers put their #RedforEd shirts back on in protest. And now the #INVESTinED movement has set its sights on defeating Ducey and ousting Justices Bolick and Pelander in their Supreme Court retention elections this November.