Koch Justice: Billionaires Seek to Expand Influence over Law Enforcement and Courts in 2018 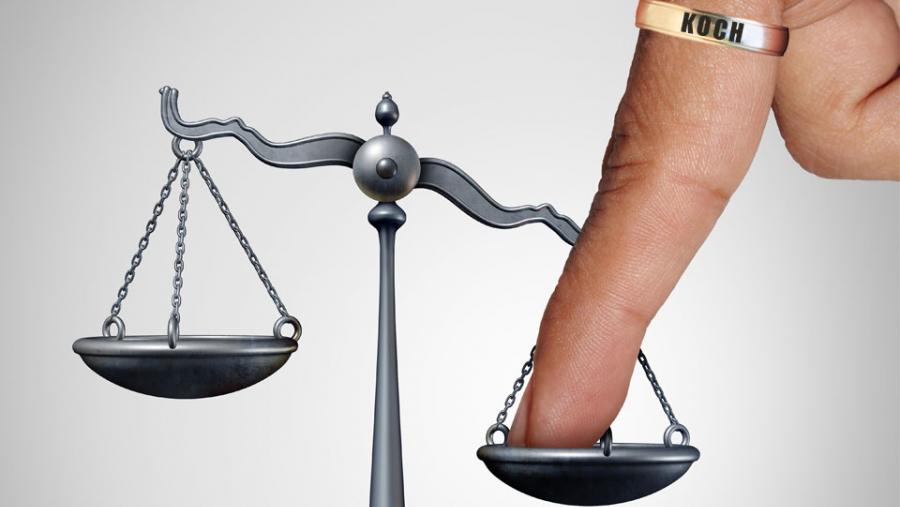 Charles and David Koch's Americans for Prosperity has announced a seven-figure campaign to get Trump's Supreme Court pick, Judge Brett Kavanaugh, confirmed to the bench. While this and the effort to get Supreme Court Justice Neil Gorsuch seated on the nation's highest court have received much attention, the Kochs' campaign to influence state attorneys general and state courts has largely flown under the radar.

Team Koch has demonstrated a strong commitment to electing Republican attorneys general, mainly through its funding of the Republican Attorneys General Association (RAGA). Koch Industries has given $250,000 to support its favored AG candidates so far this year, in addition to the $215,000 in 2017.

The Kochs are top-tier donors to RAGA, which gives them access to Republican AGs and their staff, as well as the ability to post on "a secret online bulletin board called the 'Briefing Room' that's allowing big donors to help shape legal policy," Maplight and The Intercept reported earlier this year.

Of these incumbents, only Hunter is not party to the lawsuit led by Paxton and Schimel seeking to overturn the Affordable Care Act, one of the Kochs' major policy goals remaining following Trump's massive tax cut for the wealthy that will result in the Kochs saving as much as $1.4 billion in income taxes a year.

The Kochs have funded judicial campaigns in two states in which they have large footprints: Georgia and Texas.

In Texas, the Kochs have given to State Supreme Court Justices Jeff Brown and Jimmy Blacklock's campaigns. The Kochs also gave to Justice Tom Willet, but he was confirmed to the 5th U.S. Circuit of Appeals late last year.

Below are the Koch candidates for law enforcement and the courts in 2018. Stay tuned to ExposedByCMD for more on the Kochs' electoral activities and the "Koch Candidates 2018" page on SourceWatch for regular updates between now and the November election.