DO THE KOCHS’ LOOK FOR THE UNION LABEL TO TURN A PROFIT? | PR Watch

DO THE KOCHS’ LOOK FOR THE UNION LABEL TO TURN A PROFIT? 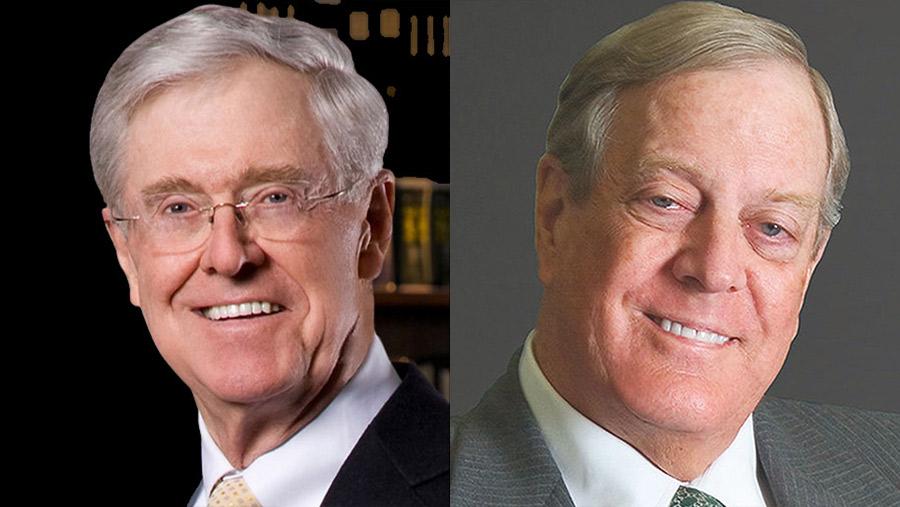 When it comes to making money, the hypocrisy of Charles and David Koch has no limits. They say they are against government subsidies, but they’ve received over $400 million in state, federal and local tax subsidies, loans, and grants.

They decry government regulations that “restrict our economic freedom...” But then they invest in heavily regulated Chinese companies. One such company, has Communist Party officials in the workplace, making sure the company does not stray too far from the Party line.

But the height of their hypocrisy is the way they attack unions, yet reap profits and dividends from companies where unions are strong.

The Koch brothers are key funders and architects of the anti-union troika the American Legislative Exchange Council (ALEC), the State Policy Network (SPN) and Americans for Prosperity (AFP). Both ALEC and SPN advance restrictions on public sector collective bargaining and push so-called “right to work” bills directed at weakening private sector unions. The Kochs’ AFP was created to provide astroturf support for this agenda.

But they have no problem profiting off of unionized companies and pocketing the dividends.

The Kochs own unionized Georgia Pacific, the paper company that makes Brawny towels and Dixie Cups. The firm is represented in a master economic agreement by the United Steelworkers. The Kochs also report owning over 800 publicly traded stocks.  Most investments are between a half a million and several million dollars, not enough in any case to give them the control enjoyed by majority shareholders.

One sector in which the Kochs currently heavily invest is aerospace, with stock holdings in Boeing, Northrup Grumman, and Rockwell Collins. The aerospace and defense sector stocks are up over 30% in the last year. Boeing has almost doubled its share price since a year ago.

All three companies employ highly skilled workers represented by the International Association of Machinists and Aerospace Workers (IAMAW) and other unions.

The Kochs also invest in food giants Kellogg, Tyson, and Hormel, which all have a union-heavy workforce, represented by the United Food and Commercial Workers.

The Kochs also own commercial airline stocks such as United and Delta. Like their counterparts in aerospace and defense, airline workers are represented by IAMAW, Teamsters, Flight Attendants, Pilots, and other unions. Even when airlines hire contract workers, such as people who clean the planes, they are increasingly using union labor, organized by the Service Employees International Union.

The Kochs own shares in United Parcel Service, perhaps one of the most unionized companies in the United States, where the Teamsters represent 250,000 workers.

The list of companies with unions owned by the Kochs is a long one, including oil, such as Conoco, Halliburton and Schlumberger, and companies such as Monsanto, Parker Hannifin, PG&E, and more.

LOOK FOR THE UNION LABEL

The Kochs’ invest in so many unionized firms, they may in fact be looking for the union label in order to make a profit.

But their anti-union crusades suggest that they don’t want to share those profits with the men and women who show up at work every day, work long and hard and make those companies tick.