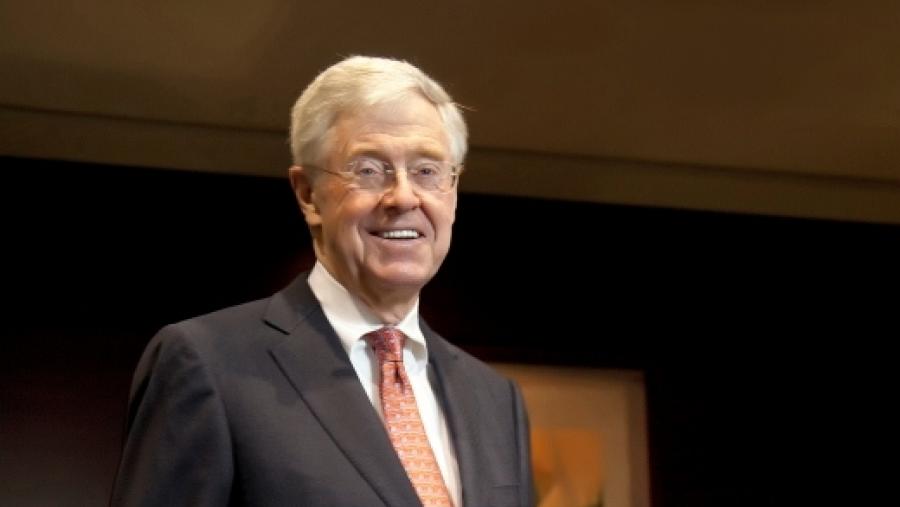 Billionaire industrialist Charles Koch is known for extolling the virtues of his own management system, "Market-Based Management." He credits this system, which he has trademarked and promoted in a series of books, as the key contributor to the success of Koch Industries, one of the largest privately held companies in America.

One of the ten core principles of this management approach is "compliance."

"Strive for 10,000% compliance with all laws and regulations, which requires 100% of employees fully complying 100% of the time. Stop, think, and ask," the Charles Koch Institute instructs.

Few would disagree that this approach is most urgently needed in protecting the health and safety of workers.

The Center for Media and Democracy (CMD) looked at the health and safety compliance of Georgia-Pacific, Koch's paper and pulp subsidiary, compiling violations and penalties collected by the federal Occupational Health and Safety Administration (OSHA), and then researching the stories behind those incidents.

Since Koch Industries bought Georgia-Pacific at the end of 2005, seven employees have been killed by or died from injuries occurring in the workplace. Many others have been injured, losing limbs, or being exposed to toxic chemicals. Looking at fines above $10,000, Koch has been fined $340,000 for ten serious incidents, including the seven deaths. Given the fact that most workplace injuries do not trigger an OSHA report and that OSHA has shockingly low penalties (compared, for instance, to the penalties available under federal environmental law) $340,000 is significant.

Georgia-Pacific facility in Big Island, Virginia. On November 23, 2016 a worker trying to clear a machine fell through a hole into a pulper tub and drowned. G-P was fined $84,000 for three violations (two serious and one willful) for inadequate training and safety precautions. The company has been contesting the fines.

Georgia-Pacific facility in Cedar Springs, Georgia. On April 10, 2006 a worker on a catwalk was welding when an air pressure relief valve released steam and a waste product called black liquor forced him against the guardrail, which gave way. The worker fell 30 feet to another catwalk and was killed. G-P was fined a total of $63,000 for five violations (four serious and one repeat) for inadequate training; inadequately written procedures for assuring that equipment was rendered inoperable while employees performed welding operations; failure to locate pressure-relief devices, so they vented away from employees; and failure to assure that input valves were closed and locked before welding began.

Georgia-Pacific facility in Cedar Springs, Georgia. On October 16, 2013 a worker was adjusting a paper machine when the core chuck arm came down, crushing and killing him. G-P was fined a total of $27,600 for seven violations (six of them serious).

Georgia-Pacific facility in Cedar Springs, Georgia. On July 24, 2014 a worker was crossing a runway at a designated walkway when she was struck by an industrial truck. She sustained multiple internal injuries which turned out to be fatal. G-P was fined a total of $35,050 for nine violations (eight of them serious).

Georgia-Pacific facility in Cedar Springs, Georgia. A follow-up inspection at the plant on August 18, 2015 resulted in a fine of $22,440 for three repeat violations.

Georgia-Pacific Chemicals plant in Columbus, Ohio. On January 26, 2015 OSHA announced that it proposed to fine the company $60,500 for 11 serious violations that exposed workers to formaldehyde and other hazardous substances. An OSHA press release stated: "Exposure to formaldehyde can have serious health consequences. Workers should not be put at risk because this company failed to implement required procedures." G-P negotiated a reduction of the fine to $42,350.

Georgia-Pacific facility in Rincon, Georgia. On August 15, 2008 a worker cleaning a dryer hood stepped off a catwalk onto the top of the hood and fell into the machine when the panel he was standing on gave way beneath him. The worker died of the injuries he received in the fall. G-P was fined a total of $20,750 for three violations (two serious and one repeat).

Georgia-Pacific facility in Batavia, Ohio. On December 4, 2006 a worker was asked to operate a box machine for the first time in many years. When he had difficulty putting a print plate in the machine he asked a co-worker to operate the controls. The worker's hand was then pulled into the machine, fracturing two fingers and lacerating another. G-P was initially fined a total of $60,000 but later negotiated the penalty down to $20,000.

Georgia-Pacific facility in San Leandro, California. On November 2, 2009 a press operator pulled a piece of cardboard from the press with his left hand while simultaneously activating the job switch button with his right hand. The paper broke, causing his hand to be pulled into the machine. The worker sustained crushed bones and ligaments in his hand and forearm. G-P was fined $14,065 for two violations, both of them serious.

Georgia-Pacific plywood facility in Corrigan, Texas. On April 26, 2014 several workers were responding to a fire in the sanding-dust collection system when an explosion occurred. This blew off the vents on the dust collector and exposed the workers to flames. Three of them sustained extensive burns, and two died as a result. G-P was fined a total of $14,000 for two violations, both of them serious.

Each story is heart wrenching because of the negligence, inadequate training, or failure to remedy an earlier noted problem. To the families of those killed and the workers who were injured, 100% compliance would be a worthy goal.