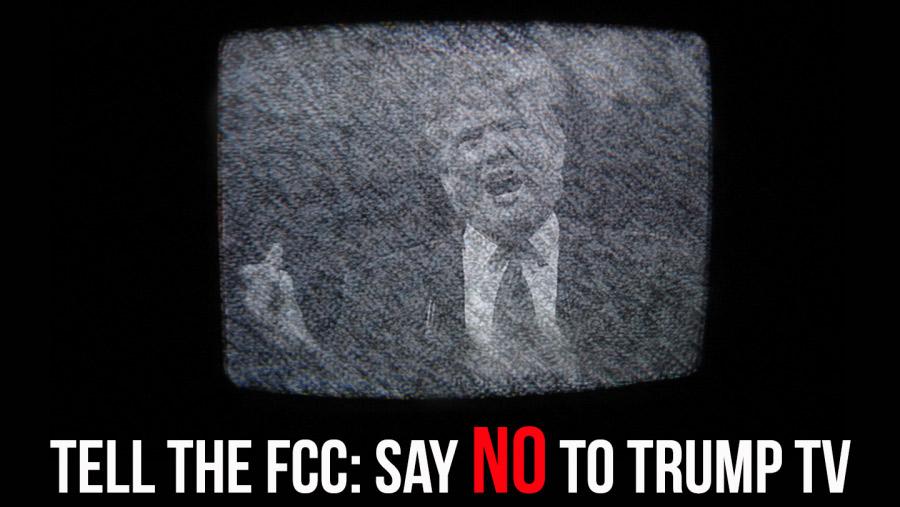 News rooms across the country are waiting anxiously to hear whether or not their takeover by Sinclair Broadcast Group will be approved by the Federal Communications Commission (FCC). Sinclair has until October 5th to respond to the latest FCC request for information about its pending $3.9 billion merger with Tribune Media Company, owner of 42 broadcast stations.

Sinclair is controversial for its size — it’s often been compared to the radio conglomerate Clear Channel — its unabashedly right-wing politics (which it pushes in the “must run” segments it forces all its stations to air) — and its close connections to the Trump White House.

Politico reported in December 2016 that the Trump presidential campaign “struck a deal with Sinclair Broadcast Group during the campaign to try and secure better media coverage,” according to his son-in-law Jared Kushner. “In exchange, Sinclair would broadcast their Trump interviews across the country without commentary,” Kushner reportedly told a gathering of business executives in Manhattan that month.

As the Washington Post reported, “Sinclair gave a disproportionate amount of neutral or favorable coverage to Trump during the campaign while often casting Clinton in an unfavorable light.”

The stakes are high. Although some critics argue that the Fox News Channel operates much like a "Trump TV" station, in reality the cable channel draws far fewer viewers than Sinclair, which already operates close to 500 local television channels, including ABC, NBC, CBS, and Fox affiliates.

As for the pending merger request, Craig Aaron, Executive Director of the anti-media consolidation group Free Press, commented, “Sure looks like a quid pro quo: friendly coverage and full employment for ex-Trump mouthpieces in exchange for a green light to get as big as Sinclair wants.”

Newsmax to Trump: "A free and diverse press...will be crippled by this proposed merger"

The media company Sinclair, based in Hunt Valley, Maryland, owns and operates more TV stations in the United States than any other company: 483 local television channels as of its 2016 annual report. Those channels include 36 ABC, 30 CBS, 22 NBC, and 54 FOX affiliates, reaching approximately 38 percent of all U.S. television households. (The FCC’s national ownership cap — currently under review by the Trump administration — restricts television broadcasters from reaching more than 39 percent of the country's population.)

In Denver, Colorado, two TV news stations (KDVR and KWGN) currently owned by Tribune Media would be transferred to Sinclair under the proposed purchase. In Des Moines, Iowa, the purchase would mean that Sinclair would own both KDSM (a FOX affiliate) and WHO (an NBC affiliate). In Oklahoma City, Sinclair would gain two stations — KFOR (an NBC affiliate) and its sister station KAUT — adding to the two it already owns there, leaving it with half the commercial TV stations in that city.

Sinclair’s moves to create an even bigger network and dominate key cities and states have critics from across the political spectrum crying foul.

Former FCC Chairman Michael Copps, who was appointed by President George W. Bush, called Sinclair “probably the most dangerous company most people have never heard of,” according to a recent expose by The Guardian. John Oliver called it “maybe the most influential media company you never heard of” in a stinging 18-minute Sinclair segment on his weekly satirical HBO show “Last Week Tonight.

According to the New York Times even Trump allies, like Newsmax are sounding the alarm.

“This week, Newsmax, whose founder, Christopher Ruddy, is a close associate of President Trump, filed a petition urging the Federal Communications Commission to deny the Sinclair-Tribune combination. One America News Network, a cable network that has championed the Trump administration’s agenda, and The Blaze, a news and entertainment network started by Glenn Beck, have also pressed for a careful assessment of the merger.

“‘A free and diverse press, a bedrock principle of American democracy, will be crippled by this proposed merger,’ Newsmax said in its filing. ‘The level of media concentration proposed by this transaction will homogenize the content available to U.S. consumers, eliminate unique viewpoints and reduce press diversity, especially in the delivery of local news.’”

Dish Network and Ride Television have also expressed their opposition.

Sinclair’s Bias Interferes with the News

Sinclair’s rise has been accompanied by frequent evidence of its favoritism of right-wing candidates and willingness to slant the news.

The company and its executives have consistently funded right-wing political candidates, according to the Center for Responsive Politics.

In April 2004, Sinclair refused to let its stations broadcast a special "Nightline" episode, produced by the ABC television network, that was devoted to reading the names of soldiers who had died in "Operation Iraqi Freedom.” It also directed its stations to air an anti-Kerry program ahead of the 2004 presidential election.

Sinclair stations are forced to make room for “must run” segments produced by the company, such as brashly right-wing video op-eds from Sinclair executive Mark Hyman and the station’s chief political analyst (and senior advisor to Trump’s campaign) Boris Epshteyn, who memorably claimed that President Obama won North Carolina because of voter fraud.

Sinclair stations are also fed scripts to introduce must-runs, leaving local news stations across the country echoing language such as, “Did the FBI have a personal vendetta in pursuing the Russia investigation of President Trump’s former national security adviser Michael Flynn?” as evidence was mounting that Flynn was in serious legal jeopardy for failure to report foreign ties and for withholding information from the Pentagon and the FBI.

Sinclair’s Threat to Freedom of the Press

Sinclair initially declined to respond to concerns raised by liberal and conservative media outlets. But in mid-July, Politico obtained an internal memo sent to Sinclair station news directors in which Vice President of News Scott Livingston claimed that "biased" news organizations reporting negative reactions to Sinclair’s latest proposed merger have "an agenda to destroy our reputation.”

Livingston’s comments echoed the company’s 2016 annual report, in which Chairman of the Board David Smith told shareholders “Our First Amendment rights are under attack…”

Because of its ties to the Trump White House and the overwhelming influence an even larger Sinclair would have on the majority of local news stations across the country, Free Press head Craig Aaron put a finer point on the threats that such a consolidation poses to freedom of the press:

“Trump-favoring mega-chain gets rules changed —  and expects others to be erased — so it can put its cookie-cutter newscasts in nearly 70 percent of local markets across the country.…. I feel terrible for the local journalists who will be forced to set aside their news judgment to air Trump administration talking points and reactionary commentaries from headquarters."

There is a Stop the Sinclair-Tribune merger petition at Free Press. Image credit: Free Press.