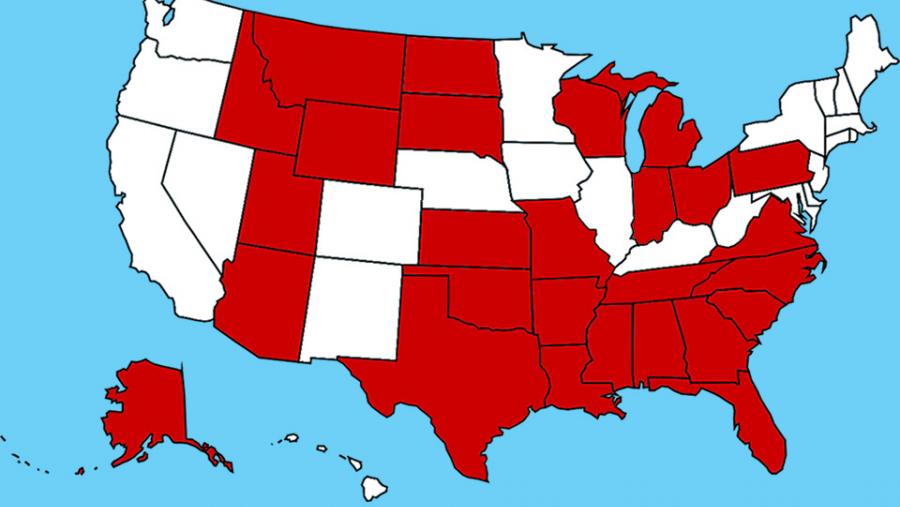 The little-known Republican State Leadership Committee (RSLC) is spending big this election cycle to maintain GOP control over state houses and is coordinating with dark money groups to fight off liberal ballot initiatives.

The RSLC is a 527 group which gained notoriety for its 2010 efforts to capture state houses and secure GOP control over decennial redistricting in a project called REDMAP.

Although little known to the public, the RSLC has been described by Politico as "one of the most influential outside players on the right." And New Yorker writer Jane Mayer describes the RSLC as a critical cog in the "shadow political machine" that emerged following the 2010 Citizens United Supreme Court ruling. Emails and court filings unearthed by the Guardian showed that RSLC was being investigated for illegal campaign coordination by Wisconsin prosecutors due to its close contact with top campaign aides of Wisconsin Governor Scott Walker in 2011 and 2012.

What Industries and Interests Are Bankrolling RSLC?

So far in 2016, according to CMD analysis, the RSLC has raised $17.95 million, the vast majority of which has come directly from corporations. Roughly 94.4% or $16.9 million has been raised from corporations, special interests and CEOs.

Individuals have also invested heavily in the group. The RSLC's second largest donor is the casino magnate Sheldon Adelson, who contributed $500,000, while eight members of the Michigan-based Devos billionaire family collectively gave $225,000.

Matching Up Secretaries of State with Donors to Talk Ballot Measures

Secretaries of State are charged with ensuring fair and accurate elections, but as the New York Times reported this week, under the leadership of RSLC, these state officials are working "to defeat liberal ballot initiatives on topics like the minimum wage, and to raise money from corporations that also wanted to kill these efforts."

The Times reported that on May 3, four Republican secretaries of state, Jon Husted of Ohio; Wayne Williams of Colorado; Barbara Cegavske of Nevada; and Kim Wyman of Washington, met with the National Restaurant Association to discuss minimum wage initiatives in Colorado, Washington and Ohio, as well as minimum wage battles in Cincinnati and Seattle. The NRA is a proponent of the $2.15 tipped minimum wage and a major corporate opponent to Fight for $15 and any effort to raise the wage.

That meeting was followed by one with Reynolds Tobacco to discuss tobacco tax ballot initiatives. What was decided at those meetings was not disclosed.

The Times also revealed that the RSLC created tiered sponsorship packages that rewarded its largest donors with "private briefings with Secretaries of State," and with regular ballot initiative briefings led by the Center for Conservative Initiatives, a project of the State Government Leadership Foundation, a "dark money" social welfare organization originally seed-funded by Exxon, Pfizer, and Time Warner, among other corporations.

RSLC Spending in the States

Most of the RSLC's contributions are funneled to state PACs that run vicious attack ads. By channeling their money through the RSLC, corporate interests are able to distance themselves from the ugliest aspects of electioneering, while providing the financial means to make it possible.

In Nevada, the RLSC has given $600,000 to the Nevada Jobs Coalition, a PAC running attack ads that critics on both sides of the aisle submit "just keep getting nastier and more deceitful--the things they say in these ads simply aren't true."

In Colorado, the RSLC has given $800,000 to Colorado Citizens for Accountable Government, an organization that is being sued for sending out fortune cookies attached to mailers that falsely accuse a Democratic senate candidate of taking a taxpayer-funded junket to China. ("I've never been to China," the candidate, Rachel Zenzinger has said repeatedly.)

In North Carolina, the RSLC has given $500,000 to Truth and Prosperity Inc., a PAC formed "to support incumbent Republican Lt. Gov. Dan Forest," and is running ads touting, not coincidentally, Forest's pledge to eliminate corporate income taxes.

In Washington state, the RSLC has given $200,000 to the Leadership Council, which subsequently donated to the Working Families PAC, a group that is running ads against State Senator Mark Mullet in his race against Representative Chad Magendanz, a candidate who, unlike Mullet, opposes increasing the minimum wage to help real working families.

In New Mexico, the RSLC has given $100,000 to Advance New Mexico Now, a PAC that is supporting Republicans and their bid for stricter criminal sentencing laws. Of note, the RSLC filings show that the organization received over $70,000 from the private prison giants CCA and Geo Group.

In addition to funding state-based PACs, the RSLC has also contributed $2,695,223 to its own "Judicial Fairness Initiative," a project the RSLC started in 2014 that produces attack ads in judicial races.

In Montana, the RSLC's Judicial Fairness Initiative was reprimanded and forced into compliance by the state's campaign finance regulator for having "blatantly violated state law by not reporting $268,000 that was used for attack ads."

The Montana advertisements in question have been condemned across the board for their sensationalism, and other advertisements the organization has aired (see this and this) are no different.

Although the Democrats have a partisan counterpart to the RSLC, the DLSC, the Republicans are far more eager, willing and systematically structured to solicit campaign donations from corporations.