Sanders Woos Progressives in Madison, Seeks to End Influence of Money in Politics 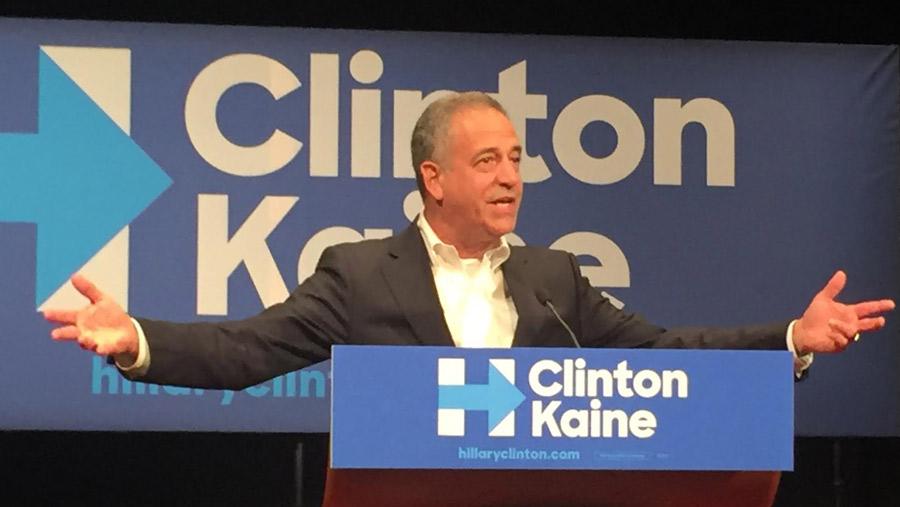 MADISON -- Senator Bernie Sanders (VT-I) returned to Madison, Wisconsin on Wednesday to campaign for a ticket that he said would overturn Citizens United.

Sanders won the Democratic primary handily in Wisconsin with 57% of the vote and now is using that credibility to encourage progressives to turn out for Hillary Clinton. Over a thousand came out to the Monona Terrace Convention Center to hear Sanders offer words of support for Clinton and Russ Feingold who is running to unseat U.S. Senator Ron Johnson.

In a lengthy speech, Sanders directly appealed to those who may have friends who are "unenthusiastic" about the election when he warned the packed hall to tell those still on the fence, that "the Koch brothers and Sheldon Adelson are enthusiastic."

Sanders took aim at the Kochs multiple times in his speech stressing early on that the "greatest challenge" the United States is facing is "a movement toward oligarchy" and that, "the Koch brothers are recognized to have more political power than the whole Republican party." Sanders pledged, "we will not allow the Koch brothers to buy the U.S. government, we will not allow that to happen," and "we need an economy that works for the working class not the 1%."

In state's like Wisconsin, Clinton is relying on progressive standard bearers like Sanders and U.S. Senator Elizabeth Warren to rally the troops on issues that get people energized. The latest Marquette Law School Poll in Wisconsin found that the presidential race is tightening up among likely voters with 44% supporting Hillary Clinton and 42% supporting Donald Trump, with 12% not expressing a preference.

In a state battered by allegations of illegal campaigning by dark money groups and the excessive influence of the Kochs, Sanders knew clean elections would have appeal. The sitting Senator from Vermont announced to the crowd that, "within the first 100 days of her Presidency, Hillary will bring forward a constitutional amendment to overturn Citizens United." Citizens United was the U.S. Supreme Court decision that unleashed unprecedented levels of undisclosed dark money in politics. Sanders pledged to travel across the country to make sure it becomes law. In 2013, Sanders introduced an amendment which clarified that the right to vote and make campaign contributions rests only in real people.

Senator Feingold, also addressed the need for campaign finance reform in his speech, calling for an end to Citizen's United. He also reminded the crowd that aside from a one-time dispute over dairy prices, Sanders and Feingold had worked together on many issues including their opposition to the Iraq war, their opposition to the U.S. Patriot Act and their efforts to make the Affordable Care Act as strong as possible.

Feingold lauded Sanders for his "contribution to democracy and to a progressive movement in America."

In Feingold's U.S. Senate contest, the latest Marquette Law School Poll found that 47% of likely voters support Feingold, while 41% expressed support for Johnson. Koch-affiliated dark money groups have spent an estimated $3 million pounding Feingold so far. Other mystery groups are jumping into the race. A new shell group called "Reform Wisconsin Fund" is currently attacking him for his pro-choice record. The group is registered by former Koch staffer Lorri Pickens and is doing its ads through NonBox, the preferred media outlet of R.J. Johnson Scott Walker's campaign guru who has been caught up in the John Doe dark money scandal. On the flip side, the super PAC League of Conservation Voters is pounding Johnson on climate change denial and the Environmental Defense Fund Action is criticizing him for voting with the Koch brothers.

Many of the attendees at Wednesday's rally came to see Sanders wearing their "Bernie" campaign t-shirts, pins, and hats. Cathy from Monroe, WI said that she "still thinks Bernie should be President," calling him "my hero." But she understands his logic in campaigning for Clinton, she said.

Max, a junior at the University of Wisconsin-Madison, also backed Sanders and went to all of his previous presidential rallies in Madison, but is now "obviously supporting Hillary." The choice is easy for him as he is "NOT voting for Trump" and a "third party vote is a waste."

Long-time progressive activists Tom and Sue Holmes of Baraboo were in the crowd. They supported Sanders in the primary, but were now supporting Clinton. "To me a key issues is global climate change. For Trump to turn his back on this is unbelievable," said Tom, who was pleased that Clinton had embraced much of Sander's progressive agenda.

Sanders ended his speech by encouraging the people in the room to continue to stay involved in politics--not only through the current election cycle--but into the future, "our efforts cannot end on election day. You can't go to sleep for the next four years. We have to create a progressive movement of millions to stand up to the Koch brothers." Referencing his "Our Revolution" group that is just getting started in Wisconsin.

Feingold will campaign with Sen Elizabeth Warren (MA-D) on Friday in Madison at the Overture Center and in Milwaukee at the Wilson Theatre.

And this just announced: Donald Trump will be in Wisconsin at the Walworth County Fair Grounds in Elkhorn on Saturday afternoon.