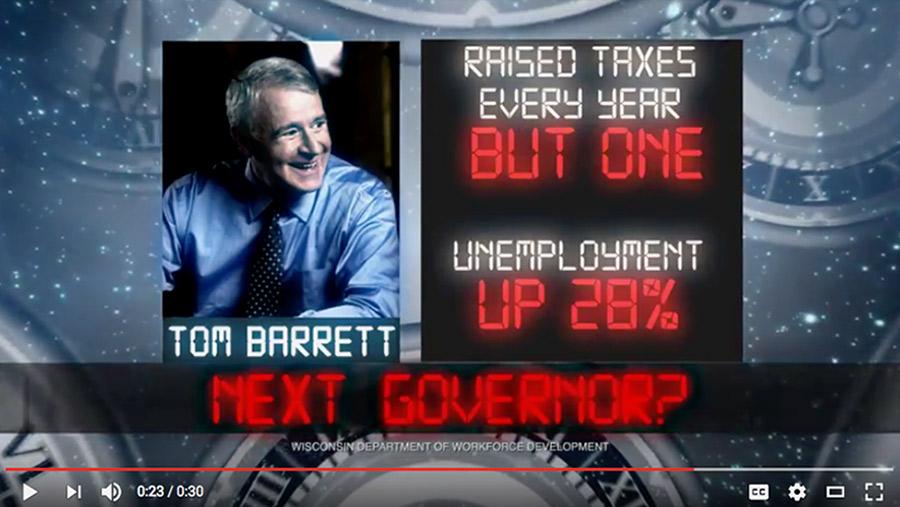 Remember 2015? It was just last year that the conservative majority on the Wisconsin Supreme Court embraced dark money and turned its back on the state's longstanding bedrock support for transparency in campaigns and elections.

In a controversial ruling that July, the Court voted 4-2 to shut down the John Doe investigation into Scott Walker's secret political fundraising scheme, arguing that coordination between Walker, his campaign consultants, and corporate lobby groups didn't matter because it was all just "issue advocacy."

It was Wisconsin's version of the Saturday Night Massacre, when Richard Nixon had Archibald Cox canned (by Robert Bork) as the special prosecutor in the Watergate scandal.

The legislative majority beholden to Walker's dark money machine for the recalls moved quickly to rewrite Wisconsin's campaign finance laws to enshrine the Court's radical ruling, dismantled the state's nonpartisan ethics board, and stripped district attorneys of the power to use the John Doe process to prosecute future campaign finance violations, erasing decades of anti-corruption reforms in the process.

Never mind that the Wisconsin Supreme Court's novel legal theory about coordination is without precedent and flies in the face of multiple U.S. Supreme Court decisions. That is the subject of an appeal that the nation's highest court will consider when it reconvenes after its summer break on September 26.

The big story is that the Wisconsin highest court's ruling is based on a false premise—a lie that could only survive under the court's draconian secrecy orders.

CMD's analysis of the John Doe documents published by The Guardian and political ads aired in 2011 and 2012 reveal that Governor Walker and his campaign staff coordinated on more than $30 million in express advocacy expenditures—from soliciting huge corporate and personal checks down to where and when political ads would be placed—something that's illegal even under the Wisconsin court's 2015 ruling.

"The Wisconsin court was wrong to say that coordination between a candidate and outside groups only matters if there's express advocacy," said Donald Simon, a prominent national expert on campaign finance law and former general counsel of Common Cause. "But even so, it's clear that many of the ads run by the groups involved in the John Doe investigation qualified as express advocacy under U.S. Supreme Court precedent."

They broke the law.

The Legal Standard at Play

The law of the land at the federal level and in most, if not all, other states is that coordination between candidates and outside political spenders converts otherwise "independent" expenditures into campaign contributions subject to limits and disclosure.

In legalizing independent expenditures by corporations in Citizens United v. FEC, Justice Kennedy reasoned that, "By definition, an independent expenditure is political speech presented to the electorate that is not coordinated with a candidate." Kennedy quoted the Court's 1976 decision in Buckley v. Valeo to back up his conclusion:

The absence of prearrangement and coordination of an expenditure with the candidate or his agent not only undermines the value of the expenditure to the candidate, but also alleviates the danger that expenditures will be given as a quid pro quo for improper commitments from the candidate.

Ruling after ruling by the U.S. Supreme Court over the past 40 years has embraced this logic about coordination. In McConnell v. FEC, for example, the Court concluded that coordinated expenditures "made after a 'wink or a nod' will be 'as useful to the candidate as cash'" and can therefore be regulated just like direct contributions.

The conservative majority on the Wisconsin Supreme Court, however, ducked this line of cases and instead relied on Wisconsin Right to Life v. FEC to reach its decision that coordination doesn't count unless the expenditure at issue contains express advocacy or its "functional equivalent." But WRTL did not deal with coordination.

Unless and until that legal sleight of hand is overturned, the law in Wisconsin is that an expenditure will not be considered for "political purposes"—and therefore subject to limits and disclosure—unless it involves "express advocacy and its functional equivalent, as those terms are defined in Buckley and WRTL II [Wisconsin Right to Life]," even if it is coordinated with a candidate.

Under the WRTL decision the Wisconsin majority relied on, an ad is considered the "functional equivalent" of express advocacy "if the ad is susceptible of no reasonable interpretation other than as an appeal to vote for or against a specific candidate." The ads considered in that case were held to be "genuine issue ad[s]" because "their content lacks indicia of express advocacy:

"The ads do not mention an election, candidacy, political party, or challenger; and they do not take a position on a candidate's character, qualifications, or fitness for office."

The ads at issue in WRTL complained about the gridlock caused by the filibuster of judicial nominees, and then asked viewers to contact both of Wisconsin's U.S. Senators to "tell them to oppose the filibuster." They did not praise or criticize a candidate, and focused on a concrete legislative issue.

So here's the standard to apply: Ads that a reasonable person would consider an appeal to vote for or against a candidate, and that mention an election or candidate and take a position on his or her character, qualifications, or fitness for office are considered the "functional equivalent" of express advocacy.

Just mentioning broad issues and then telling people to contact a candidate to praise or criticize them about it may seem clever, but it doesn't cancel out the clear electioneering nature of the message.

Applying the Standard to the Walker Scheme

What does that mean for the Walker scheme? If Walker, his aides, and dark money groups coordinated around fundraising and expenditures for political ads that meet the "functional equivalent" test, they broke the law.

According to the John Doe papers, the millions raised by Walker and his team and funneled into Wisconsin Club for Growth (WCFG) were then disbursed for ads run under several groups' names, including the shell group Citizens for a Strong America, funded entirely by WCFG, Wisconsin Family Action, and Wisconsin Manufacturers & Commerce (WMC). Walker's right-hand man, R.J. Johnson, played the lead role in orchestrating the focus of those ads and what groups they would be attributed to.

In addition, Walker's team closely coordinated its efforts and messages with other groups, including the Republican Governor's Association (RGA) and the Republican State Leadership Committee (RSLC), that were registered in Wisconsin as express advocacy organizations, and that had sworn an oath not to coordinate with candidates or their agents. RGA's Nick Ayers laid out a coordinated battle plan for the groups to Walker and Reince Priebus in March 2011, and documents indicate weekly meetings and other communication between Walker's campaign and RGA.

CMD's review of the ads run by both sets of groups in the recall and state Supreme Court elections in 2011 and 2012 reveals that most, if not all, qualify as the "functional equivalent" of express advocacy under the WRTL standard and not "issue advocacy," as presumed by the Wisconsin court.

The ads follow a general pattern. Unlike the ads at issue in WRTL, they focus on praise or criticism of a specific candidate's character, track record, and qualifications for office. Many end with a fleeting visual or verbal appeal to contact the candidate.

Some of those appeals contain clear electoral signals, like "Don't let Tom Barrett take us backwards," or "Stop Holperin." Some ask voters to thank or criticize the candidate, like "Call Justice Prosser. Thank him for protecting Wisconsin families," or "Tell Shelly Moore we need solutions, not shouting." And others attempt to disguise their political purpose with a vague issue appeal, like "Tell Mayor Barrett you support economic policies that move Wisconsin forward, not back in time," or "Call JoAnne Kloppenburg. Tell her being weak on criminals is dangerous for Wisconsin families."

In the campaign finance world, these types of ads are known as "sham issue ads." They are electioneering ads that carry all the "indicia of express advocacy," placed for an obvious political purpose in proximity to an election.

You cannot magically turn a political ad into an issue ad just by throwing in a last-second vague appeal for voters to call a candidate.

"For some of the ads in question, it's hard to believe that any voters thought they were just about the issues—ads that praise or sharply criticize a candidate just before an election are just as effective as ones that directly solicit a vote," said Brent Ferguson, counsel at the Brennan Center for Justice who has followed the John Doe probe closely.

A sampling of the electioneering ads run by groups under investigation in the John Doe probe can be found here.

The John Doe documents show that Walker and his allies believed that coordinating on the electioneering ads was critical to winning the elections they targeted.

Walker boasted of those activities in an email to Karl Rove, crediting R.J. Johnson and Wisconsin Club for Growth as "key to retaining Justice Prosser" and electing Justice Gableman.

And R.J. Johnson wrote up talking points for Walker to use in a donor call in which he touted their coordinated efforts as key to holding the Senate during the 2011 recall elections. "We needed to hold four of the six Republican Senators facing recalls last week in order to maintain our conservative majority in the state senate," Johnson wrote. "With your help and against all odds, we beat back the national unions and held our majority by a margin of 17-16."

"We also defined Democrat Fred Clark early. We used his horrendous driving record, failure to pay child support, and a recording of him saying he wanted to call a female constituent back and smack her around, to illustrate how Clark behaves when he thinks no one's watching. This angle was particularly helpful in eliminating Clark's advantage with independent women. We were behind by 2 points when we started this race and we won by 4."

The ad has been taken down and replaced with an odd cartoon, but the content of the ad is available here. Walker's team ultimately ran its ads slamming Clark for his driving record under the name of Wisconsin Family Action, a group that otherwise works on anti-abortion and marriage issues. Emails show Johnson confirming a switch from Wisconsin Club for Growth to Wisconsin Family action as the sponsor, and the ads are labeled "Respect: Olsen SD 14 (anti Fred Clark)."

There is no pretense to the ads being "issue advocacy."

The extensive evidence of coordination around electioneering ads during the 2011 and 2012 elections that met the "functional equivalent" of express advocacy standard have the potential to trigger new legal tremors in Wisconsin.

The Wisconsin Supreme Court did not analyze any of the ads in reaching its decision to terminate the John Doe investigation. Instead, it summarily dismissed the case based on false assumptions and ordered the documents destroyed or returned.

Now it has nowhere left to hide.

Even without intervention by the U.S. Supreme Court, the John Doe documents and CMD's analysis reveal solid grounds for renewed legal proceedings to address the evidence of coordination around express advocacy expenditures and to enforce any laws broken by Governor Walker, his campaign associates, and the groups that collaborated with his dark money machine.