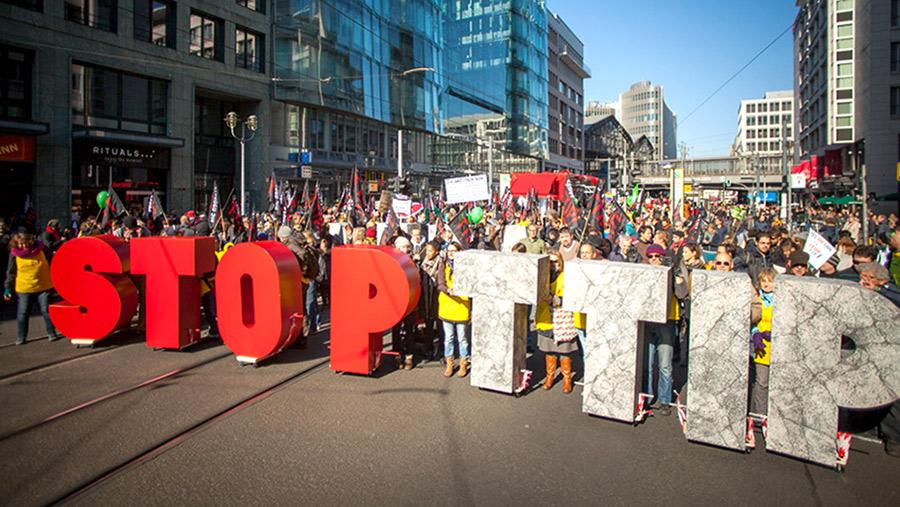 A stunning show is wrapping up at the Royal Museum in Brussels called 2050: Brief History of the Future.

Near the entrance, a poster is emblazoned with "Let the Future Tell the Truth, Another World Is Possible."

The slogan "Another World Is Possible" was popularized by the global fair trade advocates who put a spectacular stop to the Millennium Round of World Trade Organization talks in Seattle in 1999.

With all the challenges facing humanity, from catastrophic climate change, to mysterious bee colony collapse, to the Zitka virus, one would think that an old-fashioned trade agreement aimed primarily at stifling environmental, consumer, and public health regulations should be a low priority.

But tell that to the hundreds of officials who will be convening with some urgency in Brussels next week to pound out the Trans-Atlantic Trade and Investment Partnership or TTIP—a trade pact between the U.S. and the European Union (EU)—before a new U.S. president is elected.

Although negotiators tout the TTIP as the vanguard of a "new generation" of trade agreements with the potential to raise standards and advance sustainable development, in reality it is built upon the clunky, old trade rules demanded by industry to ensure just the opposite will occur.

In particular, proposals for "regulatory cooperation" and the inclusion of an "investor-to-state" dispute resolution system have generated strong opposition from consumer and environmental groups, who see them as a threat to a wide range of regulatory policies, including those needed to address the world’s most pressing problems.

Consumer concerns with the TTIP was the topic of recent conference in Brussels sponsored by the Transatlantic Consumer Dialogue, representing large and small consumer groups on both sides of the Atlantic.

European Union Trade Commissioner Cecilia Malmström joined the TACD gathering to assure the crowd of policymakers, activists and media that "no trade agreement will ever lower the levels of consumer, environmental or social and labour protection we decide on in Europe. That means that nothing in TTIP will touch the precautionary approaches we have taken to regulating in the past."

But many in the room remained unconvinced. Trade rules are stacked against "precautionary" measures like the EU's ban on artificial growth hormones in beef, which was ruled against by the WTO and cost the EU millions in punitive tariffs, or the EU's limits on certain neonicotinoids pesticides that have been scientifically implicated in the ongoing mass bee die-off on both sides of the Atlantic. Croplife America, representing Monsanto, Bayer and others, have already complained to trade negotiators that the restrictions are "an abuse of the precautionary principle."

The fact that the TTIP is slated to contain a chapter on "regulatory cooperation," does not assuage these concerns. The chapter, released by the EU, calls for a "transparency and predictable" regulatory environment "to reduce unnecessarily burdensome, duplicative or divergent regulatory requirements affecting trade or investment."

While it is hard to quibble with "transparency" and "cooperation," the problem with the approach is readily apparent.

The chapter on regulatory cooperation states: "each Party shall make publicly available at least once a year a list of planned regulatory acts at central level." Plus, parties shall analyze the regulation's "impact on trade or investment," with a new impact analysis on top of the many already required by law on both sides of the Atlantic.

The TACD conference was taking place at a hotel near the EU Parliament. Within a stone’s throw were modest buildings chock-full of law firms and lobby shops representing U.S. companies. Why are the governments interested in undertaking this labor intensive research for them and handing corporate lobbyists an annual target list of proposed regulations to sink or water down?

And why would EU regulators be interested in adopting "trade impact statements" and other tricks promoted by industry? The EU needs to tread very carefully here, cautioned Ed Mierzwinski of U.S. PIRG, when industry goals are clearly "paralysis by analysis," an art they have been so successful in achieving in the United States.

The TTIP's early warning system combined with another retrograde provision in the TTIP, the investor-state lawsuits, creates a profound force for dismantling regulations in their infancy.

While most trade agreements contain a state-state enforcement mechanism that allows governments to sue governments to enforce the terms of the agreement in closed-door trade tribunals, investor-state is a type of private court where corporate interests can directly sue nations for cash damages over public health, consumer, and environmental regulations that they feel have infringed on the special rights granted under the agreement. While corporations can't overturn laws, the mere threat of a major cash damages suit has discouraged nations from pursuing certain types of regulatory policies and inviting more cases.

The U.S.-Canadian NAFTA agreement has one of the oldest ISDR systems. Today, TransCanada is suing the United States in a NAFTA tribunal for $15 billion because the U.S. government failed to approve the pipeline it wanted to construct to bring its dirty tar sands oil to refineries on the Gulf Coast for treatment and possible shipment aboard. The Keystone XL pipeline was stopped in 2015 after a mobilization of "Cowboys and Indians" acting to protect the Ogallala aquifer and after the arrest of some 2,000 activists, the largest act of civil disobedience since the Civil Rights era.

But grassroots democratic achievements to protect a planet in crisis are not given any weight under ISDR rules, and these rules are increasingly being applied to challenge fracking bans, clean energy transitions and other measure to address climate change, as Naomi Klein pointed out in her book This Changes Everything.

After TACD issued a paper condemning the corporate court system in the TTIP in 2013, a stakeholder consultation was initiated in the EU. EU citizens overwhelmingly objected to the inclusion of ISDR in the trade agreement, and after the blowback, Parliamentarians led by the Green Party and the Socialists fielded some 200 amendments to the TTIP this summer indefinitely delaying a vote. In September, trade minister Malmström put forward a Plan B, a special bilateral investor court with more transparency, conflict of interest standards and an appellate body, but that compromise is being panned by U.S. negotiators and consumer groups alike.

Now a group of German judges may have put the nail in the coffin of the Malmström compromise. The German Magistrates Association (DRB) agreed that it saw "neither a legal basis nor a need for such a court." The judges added that the assumption that foreign investors currently don't already enjoy "effective judicial protection" in the regular court system has no "factual basis."

Or as Monique Goyens, President of the EU consumer group BEUC put it, "the Commission has not provided evidence of the need for a parallel judiciary structure between the world’s two most developed legal systems."

Malmström may claim that ISDR is "necessary" because nine EU states already have such an agreement with the United States, but it appears the EU can more easily cancel those agreements, as other nations have, than force new ones down the throat of a skeptical public and Parliament.

Another World Is Imperative

Already state-state dispute resolution has hit consumer policies in the U.S. and the EU hard. Most recently in December 2015, the WTO ruled against the U.S. country-of-origin labeling law for meat and within a week, with no hearing and no warning, this hard fought consumer protection was repealed in Congress. ISDS disputes are skyrocketing. This is why U.S. Senator Elizabeth Warren wrote in the Washington Post "replacing the U.S. legal system with a complex and unnecessary alternative—on the assumption that nothing could possibly go wrong—seems like a really bad idea."

These activists who first told the world that "Another World is Possible" have been successful in stopping the expansion of the WTO agreements, but big business continues to advance its retrograde trade agenda in other forums, including the recently signed EU-Canada trade agreement and the 12-nation TransPacific Partnership (TPP), which is headed for a battle royale in Congress.

Citizens on both sides of the Atlantic know another world is not only possible, it is imperative. It's time for policymakers to listen.