Wisconsinites Reject the “Eric O’Keefe Session” of the Legislature 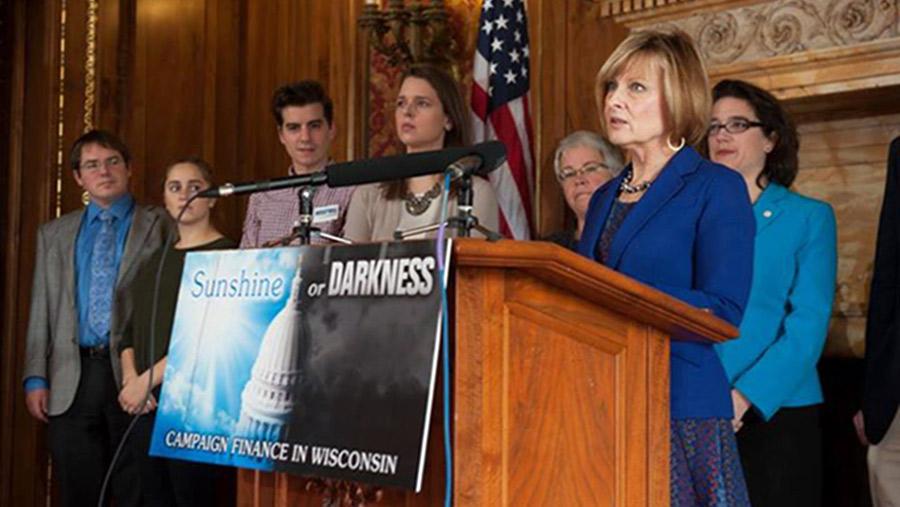 Madison--At a press conference today in the Capitol, all the good government groups in Wisconsin stood together to demand that their elected representatives reverse course on plans to allow unlimited secret money into Wisconsin campaigns and elections.

Both measures passed in the State Senate between 12 and 3 a.m. last weekend.

The campaign finance bill would permit for the first time direct candidate coordination with multi-million dollar "issue ad" groups that do not disclose their donors. This type of coordination is prohibited at the federal level and only one other state has written this coordination into law (Florida).

A late-night amendment to AB 387 would also allow coordination with so-called "express advocacy groups" (groups that run ads saying "vote for" or "vote against") as long as there is no "explicit" request from candidates or explicit assent from groups. Thus, with a wink and a nod, candidates can control the message and placement of express advocacy ads as well.

AB 387 "obscures donations and contributors under an ominous dark cloud," says Rep. Terese Berceau (D-Madison) as she presented a bill proposal which would move the state in the opposite direction, while also being compliant with federal court rulings.

Along with other requirements, the Berceau bill would require disclosure of donations used for issue ads within 60 days of an election and for express advocacy ads at all times. Nineteen other states have similar provisions, say experts. It also fixes the provision in Wisconsin state law that allows a politician under threat of recall to raise unlimited sums for a certain period of time.

"The majority party will tell you that their way is the only way of updating the statues. Nothing could be further from the truth. One of the great lies is that this legislation had to be done to comply with court decisions. In truth there are many options for how to address those decisions," including with more disclosure of issue ad donations, said Jay Heck of Wisconsin Common Cause.

The Supreme Court's Citizens United decision held that the First Amendment prohibited the government from restricting independent political expenditures by nonprofit groups. While the decision has been criticized for opening the floodgates to undisclosed money in campaigns and elections, the decision also expressly encouraged governments to improve disclosure.

A memo written by experts at the Brennan Center explains that "no state or federal court decision requires the proposed changes" in the GOP campaign spending bill. Moreover, "these provisions would make it easy for super PACs and other outside groups to flood Wisconsin races with secret campaign money, thereby transforming Wisconsin's political system from one of the most transparent in the nation to one of the least."

Under AB 387 "no one will know who is splattering their TV screens with mud," concludes Matt Rothschild of the Wisconsin Democracy Campaign.

Former State Rep. Penny Bernard Schraber was at the press conference to remind reporters that the demand for the GOP measure is not homegrown. Citizen activists in over 60 Wisconsin communities passed popular referendums demanding that Citizens United be overturned.

Heck said it was notable that the legislation had only two names on it, those of the Senate and Assembly leaders Scott Fitzgerald and Robin Vos. "This legislation is supported by one other important citizen. Eric O'Keefe of Wisconsin Club for Growth."

O'Keefe and the WiCFG were implicated in a 2013-2015 John Doe investigation of potential illegal campaign coordination between Scott Walker and purportedly "independent" outside groups. After subpoenas were delivered to O'Keefe, his associate and Walker campaign manager RJ Johnson and Johnson's business partner Deborah Jordahl, O'Keefe launched a massive legal and PR offensive to shut down the investigation. The Wall Street Journal editorial board and unknown deep pocketed funders came to his aid.

O'Keefe's gambit succeeded when the investigation was shut down by the Wisconsin Supreme Court's right-wing majority, which was elected with $10 million in spending by WiCFG. Two of the justices on the court refused to recuse when requested to do so by prosecutors.

The Berceau bill also would keep the prohibition on candidate coordinating with issue ad groups. While the Wisconsin Supreme Court ruled this coordination legal, when it put a stop to the Scott Walker John Doe, it would have to decide the matter again if the proposal is passed into law and challenged in court. "We are confident that appellate and federal courts would uphold this proposal," said Heck as it conforms to other jurisprudence.

The Scott Fitzgerald, Robin Vos, Eric O'Keefe dark money bill will be voted on in the Assembly on Monday.

Learn more about Eric O'Keefe and the Scott Walker John Doe on Sourcewatch.org.

Just why are the Lawmakers in Wisconsin voting at Midnight and 3 am? They AFRAID to vote during regular working hours? It is too bad that they are NOT for the Working People of Wisconsin