Charles Koch "Expects a Return" on Political Spending, and Gets It | PR Watch

Charles Koch "Expects a Return" on Political Spending, and Gets It 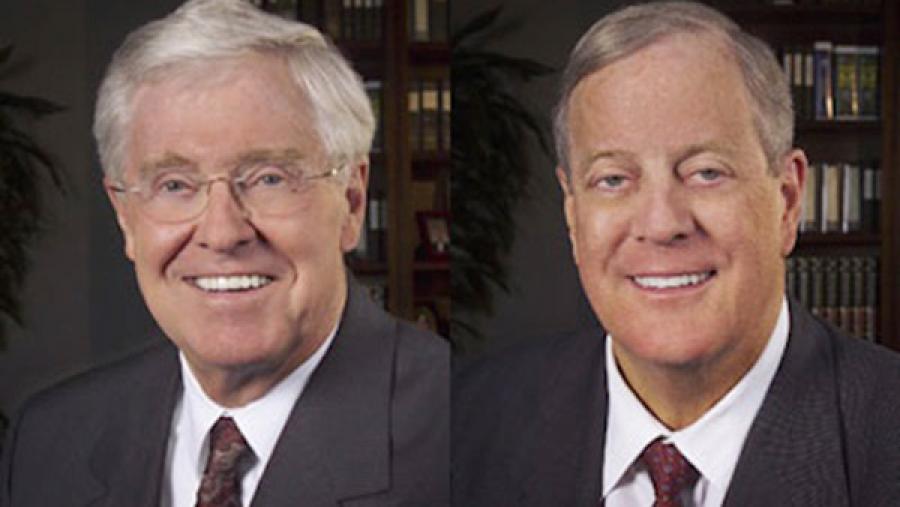 Billionaire mega-donor Charles Koch admitted that the handful of billionaires who bankroll political campaigns are doing it because they expect something in return.

Yet the outsized influence of the .00001% doesn't threaten democracy, he said, as long as a fellow billionaire thinks those big donors have the right intentions.

Koch appeared with his brother David on MSNBC's "Morning Joe" this week as part of a PR blitz to soften the Koch brothers' image ahead of the 2016 elections, where the Koch network plans to spend $250 million on direct electoral activities and a total of nearly $1 billion on broader political work.

The fawning interview followed months of positive Koch coverage from the "Morning Joe" hosts, who attended a Koch donor confab earlier this year and have praised the Kochs as "awesome" and a "godsend." (Neither MSNBC nor the Kochs will say who covered the hosts' travel and other expenses to attend the summit.)

Although most of this week's pre-recorded interview featured softball questions, host Joe Scarborough did ask:

"So let’s talk about money in politics. There was a New York Times article, I’m sure you saw it, a couple of weeks back, saying something like 150 families have contributed to the candidates that are in the race right now, the overwhelming amount of money. That’s not a way to run a democracy, is it?"

"Well, you see to me it depends on to what end. If it’s to get policies that will create and open up opportunities for people and get rid of all this corporatism and corporate welfare, wherein, what, seven of the richest counties in the country are around Washington, D.C.? I mean, we have two-year presidential campaigns where that’s all anybody’s focused on. Why is that? It just isn’t random. It’s because the government’s picking winners and losers. And you want to be a winner more than you do a loser, so you give money to slant it your way."

Koch-backed groups and others have long argued against limits on money in elections by claiming political spending is simply “free speech”--rather than something you do to "slant [the political system] your way."

And these arguments have been echoed by presidential candidates seeking Koch cash. At a Koch donor summit earlier this year, presidential candidates like Marco Rubio praised the brothers and argued that their spending "is a form of political speech protected under the Constitution" and that the big donors in the room didn’t want anything in return for their spending: "I don't know a single person in this room who's ever been to my office ... asking from government any special access. By and large what they want is to be left alone."

Yet Charles Koch himself has admitted the obvious: that big political donors give in order to slant the political system in their favor. And, Koch sees his own political spending as an investment that should provide a return:

Kochs Get a Lot in Return for Political Spending

Even if the Kochs or other big donors did have the best intentions with their massive political spending, a system where the ultra-wealthy can dictate policy outcomes more closely reflects an oligarchy than a democracy.

And repeated studies have shown that the views of the wealthy diverge significantly from those of most Americans. When elections are bankrolled by a handful of billionaires, the policy priorities of elected officials track those of their funders rather than the general public. For example, the general public overwhelmingly supports raising the minimum wage, which is a view shared by only a minority of wealthy families--and Congress has allowed the minimum wage to steadily decline in real value for decades.

Charles Koch, for his part, wants to eliminate the minimum wage altogether.

Although Koch complained on Morning Joe that he and his brother have been "failures" at entirely reshaping the U.S. political system to fit their sheltered worldview, they have managed to amass such influence that their political network rivals the power of the Republican Party and even outspent the RNC in the last presidential cycle.

The Kochs hold enough sway that they throw twice-per-year donor confabs attended by leading GOP presidential candidates, who grovel before the billionaires and spout talking points designed to appeal to the narrow interests of the deep-pocketed Koch network.

In any case, Charles Koch's claim that the only goal of the Kochs’ political spending is to end corporate welfare has been seriously challenged.

The Kochs are among the top ten air polluters in the United States – so it is no surprise that Koch-backed groups are fighting the new EPA Clean Power Plan limits on emissions to address climate change, or that Republican presidential candidates seeking Koch support badmouth the EPA's plan at Koch summits.

Profits from the Kochs' multi-billion-dollar energy empire are threatened by renewable energy, so it is no coincidence that the Kochs have poured millions into efforts to thwart the development of solar and other forms of clean power.

Regulation to address climate change would also impact Koch Industries profits, so the Kochs have poured tens of millions into groups and politicians denying the science behind man-made climate change, since regulations can't be a "solution" if there is no problem to solve. Thanks in part to Koch political spending, climate change denial is at an all-time high among Republican leaders, even though most Americans, including most Republican voters, acknowledge climate science and want action to address it.

And the Kochs have also benefitted from the corporate subsidies that they claim to oppose. According to Good Jobs First’s Subsidy Tracker database, Koch Industries has received at least $195 million in state and local subsidies, plus $6.3 million more in federal loan guarantees.

A vast majority of Americans are unhappy with the outsized influence of mega-donors like the Kochs. A Wall Street Journal/NBC poll finds 69 percent of voters agree with the statement that they “feel angry because our political system seems to only be working for the insiders with money and power, like those on Wall Street or in Washington, rather than working to help everyday people get ahead.”

A national movement is growing to push back against this big money political system. Republicans and Democrats in 16 states and almost 700 communities across the country have enacted referendums opposing Citizens United and big money in politics. And one day after the Kochs' "Morning Joe" interview, voters in Maine and Seattle approved initiatives to limit the influence of big money in elections and empower average citizens.

Americans are demanding more than empty promises from mega-donors that their spending is in the public interest. And increasingly, voters are fighting back.