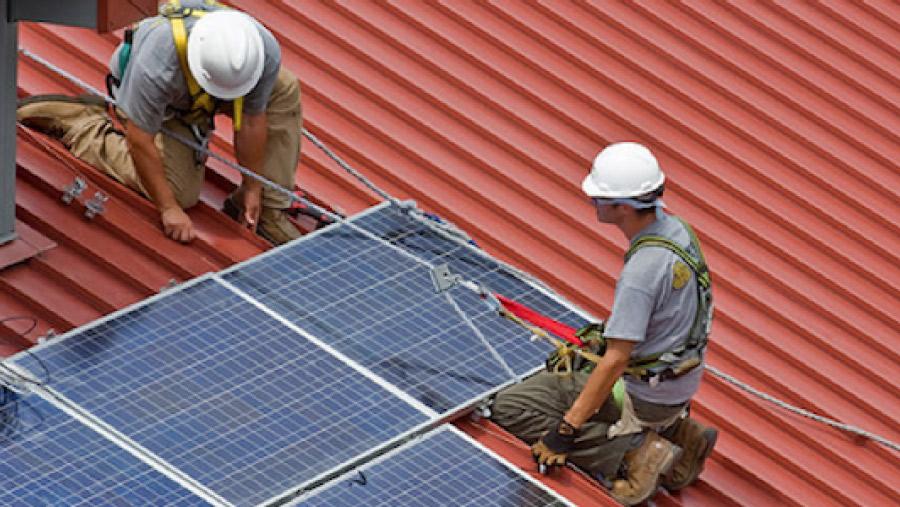 The Koch brothers and utility giants are bankrolling a ballot initiative in Florida to block the development of home solar and to protect the utilities' continuing oligopoly on energy generation in the Sunshine State.

Solar is booming in the U.S., with a thirty percent increase in generation in 2014, but surprisingly it’s facing an uphill battle in Florida. The state Public Service Commission--stacked with appointees hand-picked by Republican Governor Rick Scott for their current terms--have gutted Florida's energy efficiency goals and ended a solar power rebate program for homeowners.

State law even prevents homeowners from installing solar panels by restricting the leasing of equipment by consumers.

A coalition of environmental groups, called Floridians for Solar Choice, has secured more than 250,000 signatures of Florida residents toward proposing a ballot initiative to end this anti-solar law. If passed, their constitutional amendment would end the utilities' oligopoly on energy generation in Florida and give homeowners the flexibility to enter into contracts with solar companies, also known as Solar Power Purchase Agreements (SPPA).

If successful, the initiative would make Florida the 47th state to allow SPPA's, late but not dead last.

However, challenging the pro-solar amendment is a group calling itself "Consumers for Smart Solar" (CSS). Despite the innocuous sounding name, the group was created with cash from the utilities and groups tied to the billionaire Koch brothers--Charles and David Koch, whose vast wealth has grown from their refinery and pipeline business.

(David does own an enormous mansion in Palm Beach, although that's not the image the group's name brings to mind).

CSS is pushing Floridians to support a rival amendment that would actually prevent homeowners or businesses from contracting with solar companies that can install solar for no upfront cost.

The Utilities Have an Oligopoly in Florida, and They’re Fighting to Keep It

Eyeing home solar energy as a growing threat to their control of the market, Florida utilities have spent $12 million since 2010 on state political campaigns, according to reporting by the Florida Center for Investigative Reporting.

In just two months, Consumers for Smart Solar has received more than $473,750 from outside groups, including some that have ties to the Koch brothers, plus $325,000 from Florida utilities, according to an analysis of campaign finance data reviewed by the Center for Media and Democracy and the Energy and Policy Institute.

Here are some examples of the big money at play:

Outside Group Funding to "Consumers for Smart Solar":

Among the list of contributors to "Consumers for Smart Solar" is NBCC, which gave $50,000. The group has a long history of receiving funding from fossil fuel interests and advocating on their behalf.

Since the early 1990’s, the organization has received $950,000 in grants from ExxonMobil. They’ve not only had two channels to Koch corporate funding connections but has also received funding from other carbon companies, including Chevron, ExxonMobil and Southern Company.

So it's no surprise that the group has pushed back against many environmental regulations. Most recently, NBCC launched an entire campaign against the Clean Power Plan, which would reduce carbon pollution in the U.S. At this point, NBCC meets the definition of "front group" for corporations, running ads that throw the voice of energy companies in their lobbying agenda.

Another contributor to the anti-solar campaign is the "60 Plus Association," which contributed $100,000. This senior citizen sounding group has deep ties to the Koch money machine. It has received at least $34 million since 2010 from organizations financially backed by the Koch brothers, including at least $15.7 million from the Koch-controlled "Freedom Partners Chamber of Commerce," a new entity from the Kochs and their billionaire allies that shuttled a couple hundred million into the 2012 election cycle before anyone other than insiders knew the group's name.

This is not the first time that 60 Plus has been deployed for this kind of operation, even though it is more widely known for peddling opposition to health care reform. This Koch-aligned operation received secret funding in 2013 from Arizona's largest utility--APS--to run ads in another very sunny state, Arizona, pushing opposition to home solar. It also received at least $258,000 from the American Petroleum Institute since 2008.

Both Floridians for Solar Choice and the Koch-tied Consumers for Smart Solar are still collecting signatures to put the question of permitting Solar Purchasing Agreements to the voters on the 2016 ballot.

For more information about the utility and Koch-backed funding of a misleading ballot initiative in Florida, read the recent joint release published by the Center for Media and Democracy and the Energy and Policy Institute.

Any particular reason this article has no focus on what the amendments do and why they are good or bad? Just citing the Koch brothers, as has been abused so often in the modern political climate, is likely to make reasonable people disagree with you already.
you seem to have skipped over the descriptions of the proposals that are in this article: "A coalition of environmental groups, called Floridians for Solar Choice, has secured more than 250,000 signatures of Florida residents toward proposing a ballot initiative to end this anti-solar law. If passed, their constitutional amendment would end the utilities' oligopoly on energy generation in Florida and give homeowners the flexibility to enter into contracts with solar companies, also known as Solar Power Purchase Agreements (SPPA)." And this regarding Consumers for Smart Solar (CSS): "CSS is pushing Floridians to support a rival amendment that would actually prevent homeowners or businesses from contracting with solar companies that can install solar for no upfront cost."
I just arrived at the courthouse and was collared by a guy asking me to sign a petition for solar power. Having earlier signed the petition circulated by Floridians for Solar Choice, I asked him what the amendment that he wished me to help put on the ballot would accomplish. He stated that it will "prevent the utilities from ripping us off". Knowing that the strategy of the utilities (in the event they were unsuccessful in keeping the Floridians for Solar Choice amendment from getting on the ballot) was to put their own "astroturf" amendment on the ballot to confuse Florida voters, I asked him who was sponsoring the amendment that was the subject of his petition. He stated that it was "Consumers for Smart Solar". Not knowing the chosen name for the Koch front group, I declined to sign his petition until I did some research on "Consumers for Smart Solar". That is how I ended up at this site. Thanks for the information. This is just another illustration that the Kochs are pathological liars and will do anything and say anything to line their own pockets. So, a group funded by the Kochs and the largest utilities in Florida are supporting a ballot issue that will "prevent the utilities from ripping us off". Right.
Thank you for documenting this for other concerned citizens in Florida and across the country to see! We really appreciate it! Lisa
You are very welcome, Lisa. It is extremely important that Floridians are aware of this Koch disinformation campaign. Floridians for Solar Choice is a broad coalition of citizen groups spanning the political spectrum that also includes many retail business organizations that are at the mercy of state-sanctioned monopolies who make unwise investments in coal, gas and nuclear plants and then saddle their customers with the costs of these decisions without so much as a cross word from the Public Service Commission. The goal of "Consumers for Smart Solar" is to protect the utilities from competition. So, we all have our work cut out for us to inform the voters who genuinely care about the future of Florida (ground zero for the consequences of climate change) regarding what ballot issue truly promotes solar energy in the Sunshine State and which one has as its purpose preventing the attainment of that goal.
Thank you for all you are doing to help make our world a better place and for standing up to disinformation campaigns fueled by deceitful CEOs...
The Floridians for Solar Choice initiative did not make it on the ballot. Only the utility- and Koch-friendly initiative will be on the ballot and many people may think that is the consumer-friendly amendment. It is not and it even made it to the # 1 slot on the ballot.
As long as the Floridians for Solar Choice is not on the ballot, we must vote NO on the utility backed initiative so that we, the actual consumers, do not get boxed in for years.
An obvious propaganda piece by a political activist. We are considering solar for our home but I would not ask my neighbors to pay for my solar energy. Does your pet bill require my electricity provider to use more expensive Solar and pass that expense on to me, the consumer? We lived in CO (for 15 years) before moving to FL. CO electricity providers, by law, must to use more solar and my electric energy costs there were at lease twice what they are here in FL. You told us all about who contributes to "Consumers for Smart Solar" How about a list of those contributing to "Floridians for Solar Choice"?
Dear Lou Drakulich: Your attacks are baseless, and you completely misunderstand the issue that is being debated about whether homeowners have to go through the utility (apparently the position you favor) or if they can contract with their own installers (the position of the environmental and consumer groups who back the measure that the Koch-connected groups just thwarted). You appear to assume your bill was higher in Colorado than in Florida due to renewable energy but that is yet another assumption you make without evidence.