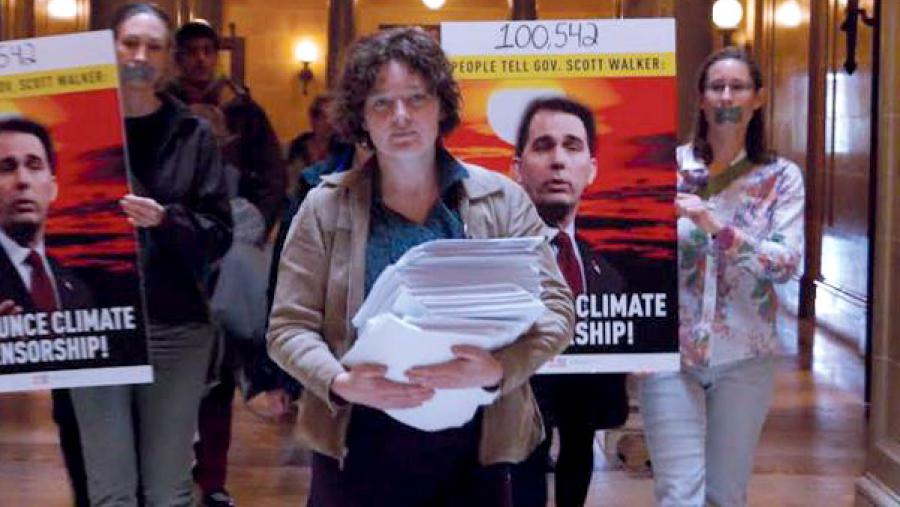 In the thick of a climate change censorship fight in Wisconsin, billionaire co-owners of Koch Industries who secretly fund the climate change denial machine, announced their support for Wisconsin Gov. Scott Walker.

Charles and David Koch, whose political network plans to spend nearly $1 billion in the 2016 presidential elections, told Republican donors in New York that Walker should be the GOP presidential candidate. "We will support whoever the candidate is," David Koch said, "but it should be Scott Walker," according to an account in the New York Times.

Koch later clarified that his remarks were not a formal endorsement, but as CMD has detailed, the Koch brothers have enthusiastically backed Walker to the tune of $11.6 million since he became governor in 2011.

Following the non-endorsement endorsement, Walker was thrilled. "We’re thrilled that he said that, just like I’m thrilled when somebody in Dubuque or Des Moines or Cedar Rapids says I’d be a great president," Walker told the Des Moines Register.

But Wisconsinites aren’t thrilled. Pushing back against Walker and the backing of the climate denial machine, climate activists wearing tape over their mouths marched up to Walker’s office in the Wisconsin State Capitol this morning to hand-deliver more than 100,000 petitions, calling on Walker to put an end to the censorship on climate change in Wisconsin.

"The silent walk in with these petitions and the duct tape across people’s mouths represents the fact that this is a gag measure, this is censorship," said Vera Pfeiffer, a Forecast the Facts member and a PhD student at the Nelson Institute for environmental studies at UW Madison. "And this is not a measure that is helping to focus people’s work, but rather just eliminating areas of discussion. It’s making their jobs harder, its adding more bureaucratic rules that they need to work around in order to get their jobs done."

The petitions were delivered on the 45th anniversary of Earth Day, founded by former Governor and U.S. Senator Gaylord Nelson of Wisconsin. After witnessing the ravages of the 1969 massive oil spill in Santa Barbara, California, Nelson founded Earth Day in 1970. The day help coalesce a growing environmental movement that led to the passage of the Clean Water Act and the Clean Air Act and the creation of the Environmental Protection Agency.

Despite the progress that has been made, environmental advocates face an uphill battle against major political funders including the Koch brothers, whose vast and ever-increasing fortunes have been made from fossil-fuel extraction and refining.

In the thick of the battle is Tia Nelson, daughter of Earth Day founder. A well known conservationist and environmental advocate, she currently serves as the executive secretary for the Wisconsin Public Board of Commissioners of Public Lands. Nelson previously served as the director of the global climate change initiative for 17 years at The Nature Conservancy. In 2009, she testified before Congress in favor of the American Clean Energy and Security Act of 2009.

Nelson also served on the global warming task force in 2007 and 2008, organized by former Gov. Jim Doyle. Her work on the task force was why she was recently targeted at a Wisconsin Public Board of Commissioners of Public Lands meeting on April 7.

After discussions took place regarding Nelson’s work on the task force, a 2-1 vote was taken by the board on banning its employees from working on global warming issues.

The board is comprised of Secretary of State Douglas La Follette, State Treasurer Matt Adamczyk and Attorney General Brad Schimel (who joined a lawsuit against the proposed federal Clean Power Plan, which would reduce carbon pollution from power plants).

Board member La Follette, who voted against the ban, said during the meeting that scrutiny over Nelson’s participation on the global warming task force bordered on the "edge of an irresponsible witch hunt." He told the Associated Press that he has "never seen such nonsense."

Wisconsin isn’t alone in the climate change censorship fight. Just last month, the Florida Center for Investigative Reporting revealed that Florida Gov. Rick Scott banned staffers in his administration from even using the terms "climate change" or "global warming" in communications or reports.

In addition to backing climate change censorship, Wisconsin Gov. Walker and Florida Gov. Scott have something else in common: they've both supported legislation modeled off of bills from the American Legislative Exchange Council (ALEC), the corporate bill mill that has been pushing a destructive agenda of climate change denial. Following the group’s threatened legal action demanding groups to retract statements that ALEC is denying climate change, a new website called ALECClimateChangeDenial.org was launched outlining the three ways that ALEC promotes climate change denial: through their speakers, agenda and funders.

Among ALEC’s corporate funders who are aiding the group’s climate change denial is lo and behold Koch Industries, which has sponsored ALEC conferences in the past.

In addition to funding groups like ALEC, the Koch machine also funds climate deniers like Willie Soon, an industry funded researcher who accepted at least $230,000 from the Charles G. Koch Charitable Foundation, according to the New York Times.

"We hope Today’s action conveyed the message that ignoring climate change does nothing to remove the threat it poses in states like Wisconsin, and that Gov. Walker should act immediately to oppose this absurd order," said Deputy Director of Forecast the Facts, Emily Southard.

"It’s no secret that Wisconsin will have to deal with the effects of human-induced climate change. Simply refusing to discuss it will only exacerbate the issues we face, which is why we’re asking Gov. Walker to take a stand for Wisconsin, and set an example for state leaders throughout the nation, by denouncing this draconian policy. This ban is censorship, plain and simple and as the Governor of Wisconsin, Scott Walker has a responsibility to condemn it," said Southard.