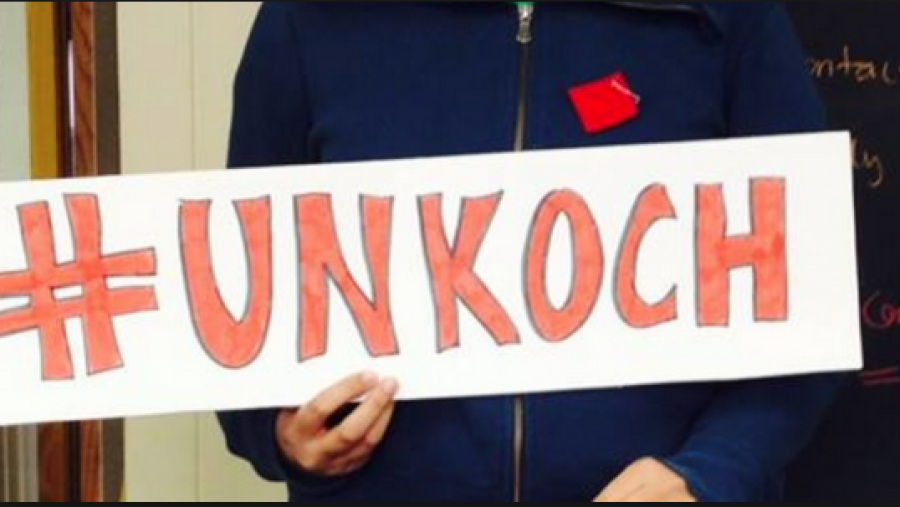 -- by Kalin Jordan, Co-founder of UnKochMyCampus

In a recent column entitled “The Campus Climate Crusade,” The Wall Street Journal’s Kimberly Strassel spent over 800 words arguing the basic conceit of UnKochMyCampus, a campaign uniting students at universities around the country who are working to increase transparency on their campuses and fight attempts by corporate donors like Charles and David Koch from influencing their education.

Her core arguments? The left is wielding transparency as a “weapon,” and efforts to access information through Freedom of Information Act (FOIA) requests are “shutting down debate across the country.”

Unfortunately for Strassel, that couldn’t be farther from the truth. Our work with UnKochMyCampus has shown us that transparency removes the smoke and mirrors that cloud the debate, leaving ordinary people ill-equipped to develop informed opinions on research and policy around the most important issues of the day. Our policy is being shaped by corporations, for corporations - and that’s a huge problem.

There was a time when the public engaged in a seemingly-legitimate debate about whether smoking caused cancer. Then we learned that the studies claiming cigarettes were safe were funded by the tobacco industry. Once the cat was out of the bag, people saw that “debate” for what it was - a farce.

Just as tobacco companies had a vested financial interest in keeping the public in the dark about the dangers of smoking, today’s fossil fuel companies are stoking denial about the realities of climate change and masking the positive impact of regulations and renewable energy programs to protect their bottom line.

Just weeks ago it was revealed that Harvard-Smithsonian’s Willie Soon - whose climate change studies the scientific community have long claimed to be inaccurate - received almost all of his funding from fossil fuel interests. Were it not for public disclosure laws, this information would have been hidden from the public, making it much more difficult for those who are not members of the scientific community to discern whether Soon’s research was above board or just corporate PR disguised as science.

While this is an egregious example, it’s by no means an aberration. Between 2001 and 2013, the Charles Koch Foundation has provided nearly $70 million to almost 400 campuses across the country. This money goes to researchers like Soon or think-tanks like the Beacon Hill Institute housed at Suffolk University in Boston that produce content designed to further climate denial and attack policies they oppose, like the Environmental Protection Agency’s carbon rule or state renewable portfolio standards.

But that’s not all the money buys. As students at Florida State University and Clemson University discovered in 2011, grant agreements (Memorandums of Understanding, or "MOUs") between universities and the Charles Koch Foundation often give the Kochs influence over the hiring of professors and development of course curriculum. In other words, on top of reshaping scientific studies to further their bottom line, the Kochs are also trying to reshape public education to match their libertarian ideology. This strategy has been in effect for decades, and was even referenced outright by Charles Koch during a 1974 speech he delivered to a room of businessmen at a seminar on “The Anti-Capitalist Mentality”: “We should cease financing our own destruction…by supporting only those programs, departments or schools that contribute in some way to our individual companies or to the general welfare of our free enterprise system."

Bringing to light the MOUs between the Charles Koch Foundation and universities exposed the Kochs’ dark money campaign on college campuses around the country and rightfully caused an uproar, which explains why Koch Industries is so vehemently opposed to further efforts by students involved in the UnKoch My Campus campaign to increase transparency. Case in point: Koch Industries is currently paying legal fees for University of Kansas professor Art Hall who sued the university following a Kansas Open Records Act request submitted by a student who sought to gain more information into his hiring. It sure looks shady: From 1997 to 2004, Hall was chief economist of Koch Industries’ lobbying subsidiary, Koch Companies Public Sector, and currently serves as the director of KU’s conservative Center for Applied Economics, which receives funding from the Kochs.

But perhaps no other university in the country serves as a better example of the corporatization of education than George Mason University in Fairfax, VA. GMU has received more than $34 million from the Charles Koch Foundation since 2011. But the real impact of the Kochs’ funding on campus remains a mystery. Despite repeated attempts by students to obtain information about the grants and MOU with the Foundation, the school refuses to comply because it has housed the grants under the private George Mason University Foundation instead of the university itself in an attempt to prevent any potentially damning information about their source from being subject to the rules governing public universities like GMU.

Transparency is one of the last avenues available to concerned members of the public, including students, professors, and alumni, who have serious and well-founded concerns about the motives of major financial donors like the Kochs. If transparency is seen as such a threat, only one logical question remains: what are they so afraid of disclosing?

CMD is working with UnKochMyCampus.org to highlight these issues. Learn more at KochExposed.org and on the Koch Universities page of Sourcewatch.org