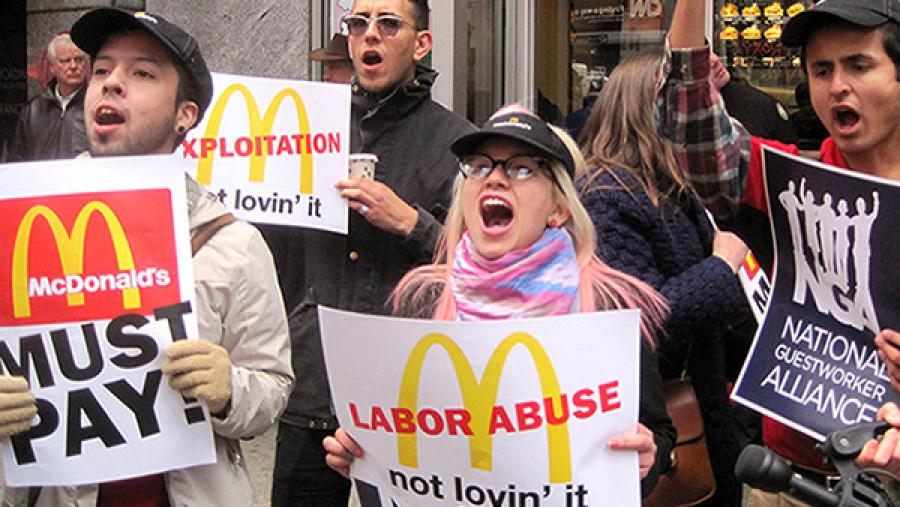 Madison, WI—Backed by big corporate dollars from McDonald's and others, the International Franchise Association is using legal maneuvers and back room lobbying to try to undermine workers in the fast food industry.

A new resource, launched today by the Center for Media and Democracy--publishers of SourceWatch.org, PRWatch.org and ALECexposed.org--provides little-known information about the IFA, its coalitions, and its front groups. Click here to see CMD's profile of the International Franchise Association and ten related pages in our Sourcewatch wiki.

The site is being launched as fast food workers in 200 cities and 35 countries go on strike for higher wages and better benefits.

“Americans are tired of big corporate lobbyists waging costly litigation against working people in this country,” said Mary Bottari, Deputy Director. “The International Franchise Association allows giant firms to hide behind the mask of small business. The media, elected officials and the public should know that the IFA is really multi-billion dollar corporations like McDonalds lobbying against the needs of the workers who build their profits.”

IFA engages in lobbying and litigation on behalf of some of the nation's largest corporations in the battle to keep wages low and limit access to healthcare. Right now, one of its key aims is blocking the federal government’s case against McDonald’s over charges that the company has committed widespread violations of federal labor law. The group spent about $1 million lobbying at the federal level in 2014 spent $1.3 million in the 2014 election cycle, placing it in the top 25 political action committees for trade associations. It has close ties with GOP legislators; for example, it named U.S. Senator Marco Rubio the 2013 IFA Legislator of the Year.

* IFA is a proud member of ALEC. IFA is a member of the American Legislative Exchange Council (ALEC), the controversial corporate bill mill, which is now pushing the IFA’s "Franchiser Immunity" bill in an attempt to undermine the National Labor Relations Board’s case against McDonald’s. 103 corporations have left ALEC in recent years over its efforts to promote climate denial and extreme anti-labor, voter suppression and gun laws.

* Lawsuit against Seattle's minimum wage. After Seattle passed a new, $15-an-hour minimum wage in June 2014, IFA sued the city, claiming the law unfairly attacked "small businesses"—like McDonald's and KFC. The wage law gives small local businesses a longer phase-in period for the $15 minimum wage, but doesn't count franchises of large national chains in that category. In March, a U.S. District Court denied an injunction requested by IFA that would have prevented the wage increase from going into effect on April 1, 2015. In his opinion Judge Richard A. Jones stated that "there is simply no credible evidence in the record that indicates franchisees will close up shop or reduce operations, or that new franchisees will not open up in Seattle" as a result of the wage increase. He also rejected the notion that franchisees are essentially small businesses, writing, "franchisees and independent small businesses have different business structures."

* Fighting the NLRB "joint employer" determination. IFA has been aggressively fighting a July 2014 determination by the general counsel of the National Labor Relations Board that McDonald's is a joint employer, meaning that it can be held liable for labor violations jointly with franchise operators. The NLRB contends that the McDonald's corporation, "through its franchise relationship and its use of tools, resources and technology, engages in sufficient control over its franchisees' operations, beyond protection of the brand, to make it a putative joint employer with its franchisees, sharing liability for violations" of national labor laws. IFA launched a "Labor & Workforce Hub" website attacking the NLRB, and large parts of its Franchise Action Network website are devoted to its defense of McDonald's. Another anti-NLRB project, Defend Main Street, was created by "notorious" astrotrufer Richard Berman for the Job Creators Network, a group with close ties to IFA.

* Blocking healthcare access. Several of IFA's astroturf and coalition groups are trying to block the expansion of healthcare access. The Council for Affordable Health Coverage, Employers for Flexibility in Health Care, and the Stop the Health Insurance Tax Coalition are all fighting key provisions of the Affordable Care Act, like the employer mandate and the health insurance fee charged to large insurance companies. Through these groups, IFA partners with other major business lobbies like the U.S. Chamber of Commerce, the National Restaurant Association, the National Federation of Independent Business, the National Association of Manufacturers, and the American Hotel and Lodging Association.

To learn more, see the full SourceWatch profile of the International Franchise Association and related pages.

IFA is also a plaintiff in the lawsuit challenging the revised companionship exemption, which would finally extend minimum wage and overtime rules to 2 million home care workers. On MAy 7 oral arguments will be heard in DC federal appeals court. More info at www.companionshipexemption.com.