The Wisconsin Supreme Court Is Not Conservative | PR Watch

The Wisconsin Supreme Court Is Not Conservative 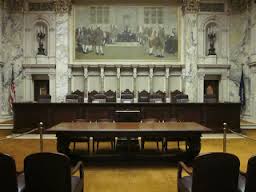 But the decisions were anything but conservative -- instead, they ran counter to conservative principles like federalism and judicial restraint.

The court’s two voter ID rulings – issued on the same day, in response to two separate challenges from the League of Women Voters and the NAACP -- reversed lower court decisions that had blocked the law as violative of the Wisconsin Constitution’s express protections for voting rights.

Typically, conservatives espouse a view that states possess authority independent of the federal branches of government, and that sources of state law reign supreme.

Yet in the NAACP voter ID case, the four “conservative” justices largely disregarded the state constitution’s voting rights protections. Those justices instead marched in lockstep behind the U.S. Supreme Court’s interpretation of the U.S. Constitution which, unlike the Wisconsin Constitution, does not expressly protect voting rights.

Article III, Section 1 of the Wisconsin Constitution provides that all state residents who are U.S. citizens and over age 18 may vote; there is no analogous protection in the U.S. Constitution.

The majority “disregarded the independent voting protections of the Wisconsin Constitution by following the federal constitutional rules for voting,” said Josh Douglas, a professor at the University of Kentucky College of Law who has studied voting rights under state constitutions.

The Wisconsin circuit courts that first considered challenges to the state's voter ID law distinguished their decisions from the Crawford case. Not only was there much more extensive evidence that Dairy State voters would be disenfranchised than had been before the U.S. Supreme Court in Crawford, but also held that the Wisconsin Constitution’s greater voting rights protections demanded that the voter ID restriction pass a higher bar. The lower court hearing the NAACP challenge held that the burdens imposed on the voting rights of nearly 300,000 Wisconsin citizens who don't have photo ID -- approximately 9 percent of voters, a disproportionate number of whom are people of color -- are not outweighed by the state interest in stopping a statistically insignificant rate of "fraud."

In its decision last month, the Wisconsin Supreme Court reversed those lower court decisions, and “followed the U.S. Supreme Court’s narrow Equal Protection jurisprudence when interpreting its own state constitution’s voting rights provision,” Douglas said. The majority downplayed the burden that voters would face in obtaining an ID, and as proof that voter fraud exists, cited an example of a Walker supporter charged with 13 counts of election fraud -- even though an ID requirement likely would not have prevented any of that voter's alleged violations.

The dissenting justices criticized the majority for undermining the state constitution's express protections for the right to vote.

Chief Justice Shirley Abrahamson, dissenting from both voter ID cases, wrote that the Court “ignore[d] the uniqueness of Wisconsin's constitutional provision on voting rights and Wisconsin's unique jurisprudence protecting the right to vote under its own constitution.”

“Classic example of legislating from the bench”

Although the Wisconsin Supreme Court’s majority in the NAACP case largely failed to give an independent reading of the Wisconsin Constitution, it nonetheless found that the costs associated with obtaining the underlying documents for an ID amounted to an unconstitutional poll tax. Although an ID itself can be free, obtaining underlying documents like birth certificates require that voters pay fees.

Yet instead of striking down the law, the court took it upon itself to rewrite the statute and administrative rules to save voter ID.

“This is a classic example of legislating from bench,” Douglas said.

Rather than adhering to traditionally conservative principles like judicial restraint and separation of powers, the court reached out and rewrote an administrative rule that was not at issue in the case. It created its own set of procedures for the Department of Transportation to give identification documents to indigent voters in a "constitutionally permissible manner," yet provided little guidance for how to implement its newly-created rules.

“To me you can’t get more activist than that," Douglas said.

“Rewriting legislatively enacted laws is the very definition of judicial activism,” said Susan Crawford, an attorney who represented the League of Women Voters in the voter ID case. “The court should have left it to the legislature to fix the law, if in fact it survives federal court review.”

In the 4-3 League of Women Voters decision, the Court didn't explicitly march in lockstep behind the U.S. Supreme Court, but nonetheless rejected a claim that the voter ID requirement amounted to an additional qualification beyond what is permissible under the Wisconsin Constitution.

Despite the Wisconsin Supreme Court's rulings, the voter ID law remains blocked, thanks to a federal court earlier this year finding that the law violates Section 2 of the Voting Rights Act and the U.S. Constitution.

In April, federal Judge Lynn Adelman held that Wisconsin's Voter ID law violated the U.S. Constitution and Section 2 of the Voting Rights Act. Adelman found that the extensive evidence of the law's impact on eligible Wisconsin voters, and the lack of evidence of voter fraud in the state, led to a different result than the U.S. Supreme Court in Crawford.