-- by Mary Bottari and Sean Hoey

Generation Opportunity (Gen Opp), a "nonpartisan" youth group funded by the Koch brothers "Freedom Partners" conduit, is backing one of the Koch's favorite politicians and thanking him for his support for a Koch-approved ALEC model bill.

The Arlington, Virginia, astroturf group recently asked Wisconsinites to sign a petition thanking Governor Scott Walker for signing "The CASE for Jobs Act." The tweets signal that the group is trying to capture names in Wisconsin perhaps for use in the election cycle. As CMD previously reported, the group has been spending big money in federal races for the U.S. Senate.

The tweets from @GenOppWI went viral on Twitter, but not for the reasons the group would have hoped. Rather, Wisconsinites reacted viscerally to the call to thank Wisconsin's governor for making progress on jobs.

"@GenOppWI Is this a joke?" was one of the milder and more common responses pouring into the Gen Opp account, prompting one Walker supporter to lament, "I can't believe the negative replies."

Gen Opp signaled its support for Walker by thanking him "for giving our generation an opportunity to build our own future." How are Wisconsin youth building their future? Apparently by "crowdfunding" capital.

Just a few months before the election, Gen Opp has begun peddling a petition to thank Walker for signing the CASE for Jobs Act, which he signed into law eight months ago. The bill in question was co-authored by Wisconsin ALEC members Rep. David Craig, Rep. Chad Weininger, and State Senator Leah Vukmir. Vukmir, an ALEC Board Member, was sued by the Center for Media and Democracy for failure to respond to our open records requests. The state attorney general settled the case with CMD in 2014, paying penalties and fees.

Drafting documents obtained by CMD reveal that the CASE Act was modeled on a North Carolina bill, the "Jump-Start Our Business Start-Ups Act" (JOBS Act). It, too, was introduced by a passel of ALEC politicians, including Kelly Hastings, Tom Murry, and Tim Moffitt. So it's not surprising that the bill then moved to ALEC and became ALEC's Local Investment Made Easy (LIME) Act, which was on the ALEC agenda in Kansas City in April 2014. It was approved as a "model" by ALEC's board, which includes Koch Industries, on July 1, 2014. Under the bill businesses are granted exemptions from state securities law and allowed to raise as much as $1 million from investors without an audited financial statement and up to $2 million with an audit (what could go wrong?). In case that was not worrisome enough, the Wisconsin version lowers the threshold to be an accredited investor. The Milwaukee Business Journal raised concerns that the changes would create risk for unsophisticated investors. 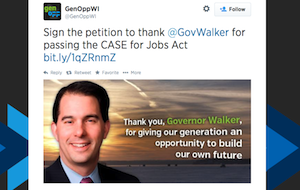 Although the bill passed long ago, Gen Opp is trotting it out again to foster the notion that Walker is busy on the jobs front. In June 2014, CMD did an analysis that showed that the Wisconsin Economic Development Authority, Walker's flagship jobs agency which he chairs, had only created 5,800 jobs in the past three years. During the same period Wisconsin's WARN database indicates that 13,000 jobs were lost to plant closings and mass layoffs. Federal data puts Wisconsin in the 37th spot of all 50 states for new job creation and dead last among its Midwestern neighbors in job creation.

But the facts haven't stopped the Koch spin machine. Koch's American's for Prosperity Group recently spent nearly $900,000 on another round of TV ads sticking to their old mantra regarding the Walker agenda -- "It's Working!" after spending millions on the same message during Walker's 2012 recall election. And, a Koch-controlled foundation helped underwrite ALEC's "Rich States, Poor States" report which pumped up Wisconsin's purported economic grade despite the state's actually dismal economic performance. In 2010, Koch Industries PAC contributed $43,000 to Walker's campaign directly.

Wisconsinites who've had the misfortune of living through Walker's divisive and ineffective economic policies, were quick to respond to the Gen Opp spin with snark, facts and outrage, as can be seen below.

As PR Watch reported earlier this month, Gen Opp launched a massive, nearly $2.3 million ad buy against Senators Kay Hagan (D-NC), Mary Landrieu (D-LA), and Mark Udall (D-CO) – all vulnerable Democrats in tough reelection fights that could determine the control of the U.S. Senate in the next session. Its support for Walker shows it will now be weighing into state races, too.

Where does Gen Opp get all this cash?

In 2012, Gen Opp received $5 million from Freedom Partners, a key part of the Koch political apparatus which raised some $256 million for the 2012 election cycle from deep pocketed donors many of whom have donated a million dollars or more to the Koch network in response to appeals from the Kochs at their donor retreats. It was almost a year after that election that tax filings first revealed the existence of Freedom Partners, which is stocked with Koch operatives, had bankrolled almost the entirety of the "grassroots" opposition to "Obamacare." Gen Opp also received over $2 million from TC4 Trust another Koch-tied conduit in 2012.

It is early days for Gen Opp, and analysts anticipate they are likely to jump into more states where hot races are looming this fall. 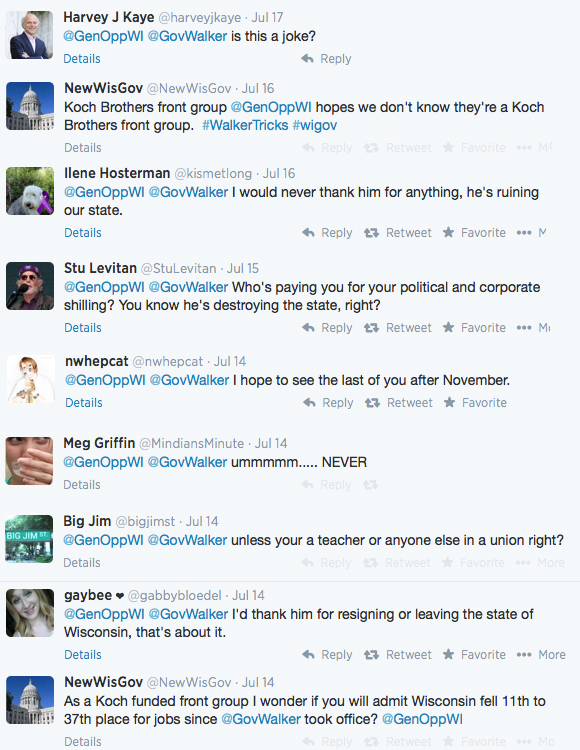 For more on the billionaire industrialist Koch brothers and the power and influence of the Koch cadre and Koch cash, see CMD's unique wiki resource KochExposed.org.

Great article. Loved your piece in the latest issue of The Progressive. Hope Mary Burke will get the momentum to unseat Walker. This year's election will determine the fate of so many states. We need to get out the vote or be doomed to a repeat of 2010.