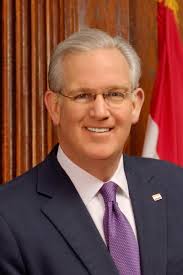 "While some may believe that such an error is 'close enough' for a model act, it cannot be allowed to become the law of this State," Nixon, a Democrat, wrote in his veto message. "Particularly in an area of the law that is the subject of ongoing litigation, a glaring defect such as this cannot be ignored."

Missouri Senate Bill 508, sponsored by ALEC member Sen. Mike Parsons, was modeled after the ALEC Navigator Background Check Act, and aimed to create new hurdles for health care “navigators” who enroll Missourians in healthcare plans under the Affordable Care Act. The bill was voted on by ALEC's corporate and politician members at ALEC's December 2013 meeting, and became official ALEC policy in January 2014.

The original ALEC model legislation would have required a navigator to submit fingerprints to the state highway patrol for a background check, and referenced the federal Public Law 92-554 -- but the correct reference is to Public Law 92-544, which deals with federal criminal records. The error in the ALEC model bill was copied-and-pasted verbatim into the Missouri legislation.

"Some state legislatures that have considered similar navigator-related legislation derived from ALEC model legislation have taken the opportunity to fix the incorrect reference from the ALEC model before enacting it," such as Arizona, Nixon wrote in his veto message. "However, like the Missouri General Assembly, other state legislatures considering such legislation have simply parroted the incorrect reference from the ALEC model act without alteration," noting that politicians in neighboring Kansas made the same mistake.

This isn’t the first time that ALEC politicians have pushed ALEC legislation without paying much attention. Two years ago in Florida, Florida state Rep. Rachel Burgin (R) forgot to remove ALEC’s mission statement from a bill she introduced.

ALEC held its most recent meeting in Kansas City, Missouri in May.

ALEC of course, is a Koch front. The Kochs have led the attacks on the ACA, not so much because of their faux-libertarian opposition to the Act, but because it's a can they're trying to tie to the tails of vulnerable Democrats.