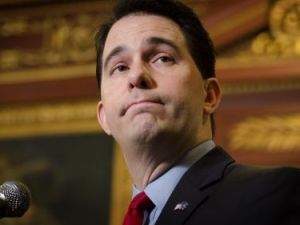 New court filings in a federal challenge to Wisconsin's John Doe campaign finance probe into Wisconsin Governor Scott Walker undermine claims from Wisconsin Club for Growth and the Wall Street Journal that the investigation is a "partisan witch-hunt" and a case of biased selective prosecution on the part of Milwaukee's Democratic District Attorney.

If Walker and Wisconsin Club for Growth prevail in their challenges to the probe, the state's campaign finance laws would be effectively eviscerated, which prosecutors say would "open the door to impropriety."

The investigation has gone national in some circles, with the Wall Street Journal and right-wing outlets portraying the enforcement of Wisconsin's campaign finance laws as the government using its power to suppress political "speech." Yet it has attracted relatively little attention in the national mainstream media -- despite the direct involvement of Walker, a presidential aspirant who just launched his 2014 gubernatorial reelection bid and whose campaign has asked the state Supreme Court to stop the investigation.

According to Wall Street Journal, "the John Doe probe has been a one-sided investigation conducted against political opponents to chill their ability to influence elections."

Yet the latest court filings destroy that portrayal. The Special Prosecutor at the head of the John Doe voted for Walker during the 2012 recall elections, and the Democratic prosecutor who launched the probe, Milwaukee District Attorney John Chisholm has pursued charges against multiple Democrats in recent years, including Walker's opponent, Tom Barrett.

Much of the national conservative media attention is likely attributable to Wisconsin Club for Growth Director Eric O'Keefe, a longtime right-wing activist and ally of the Koch brothers stretching back to at least 1980, when David Koch was on the Libertarian Party's presidential ticket and O'Keefe was the Party's national director. Among other things, O'Keefe is on the board of the Cato Institute, helped found the anti-campaign finance reform Center for Competitive Politics, was on the board of the national Club for Growth, and led the Sam Adams Alliance, which in turn helped launch American Majority and the Franklin Center for Government & Public Integrity.

For nearly a year, District Attorneys in five Wisconsin counties, from both political parties, have been investigating whether candidates -- including Walker’s campaign -- coordinated during Wisconsin’s contentious 2011 and 2012 recall elections with independent electoral groups like O'Keefe's WCFG (which spent $9.1 million on the recalls, and which is led by a top Walker advisor and friend, R.J. Johnson) and David Koch's Americans for Prosperity (which spent $10 million). In federal elections, such coordination would be strictly prohibited, but WCFG has argued that it is not illegal under state law. In October, the bipartisan group of District Attorneys appointed former counter-terrorism investigator Francis Schmitz as Special Prosecutor to lead the investigation.

Last November, O'Keefe broke the John Doe secrecy order and told the Wall Street Journal editorial board he had been subpoenaed; the Journal's editorial page has since written at least five articles about the John Doe -- describing it as an effort "to intimidate and muzzle the local activists who rallied to Mr. Walker's recall defense" -- in many cases citing publicly-unavailable court documents or sources close to the investigation. This has put Wisconsinites in the odd position of hearing breaking news about their state on the opinion pages of the Wall Street Journal.

Also piling-on has been the Franklin Center's Wisconsin Reporter website, which has cited unnamed sources in the dozens of stories it has published in a series called "Wisconsin's Secret War." Yet Franklin Center has largely failed to disclose not only that the organization was launched by O'Keefe, but that Franklin Center's Director of Special Projects, John Connors, is president of one of the groups subpoenaed in the John Doe probe. That group, Citizens for a Strong America, is effectively an arm of O'Keefe's WCFG: it was entirely funded by WCFG in 2011 and 2012.

The Wall Street Journal and Franklin Center's Wisconsin Reporter have used their platform to portray the investigation as a "a political weapon intended to serve partisan ends" led by over-zealous and partisan Milwaukee prosecutors. They've drawn comparisons to the "IRS political targeting scandal" and claim it is an example of how "government enforcement power can be used to stifle political speech."

In February, O’Keefe filed a federal suit challenging the John Doe probe on similar grounds, alleging that John Doe prosecutors have "singled out Plaintiffs as targets for investigation, ... while others similarly situated were not targeted." O'Keefe alleges the investigation is a form of retaliation for WCFG exercising its First Amendment rights in the form of $9.1 million in undisclosed election spending.

On April 8, federal Judge Rudolph Randa rejected a request from prosecutors to throw out the case. (Prosecutors are appealing that decision.) The latest round of filings come as Judge Randa considers O'Keefe's request that he issue a preliminary injunction to block prosecutors from continuing the John Doe investigation while the case proceeds.

In the federal complaint, O'Keefe alleges that Special Prosecutor Francis Schmitz was appointed in an effort to minimize the “appearance of impropriety” because Schmitz “lacked the publicly known ties to liberal politics plaguing” the other defendants. Schmitz had been on George W. Bush's shortlist for U.S. Attorney, but his political affiliations were otherwise unknown.

"Schmitz attempts to insulate himself because, unlike the Milwaukee Defendants, he is not a known liberal," he wrote. "[T]he Court is not persuaded by Schmitz's attempt to disclaim all knowledge of the retaliatory motive behind an investigation he was chosen to lead."

Yet in an unusual declaration filed with the Court on April 15, Schmitz swears otherwise.

"I voted for Governor Scott Walker in Wisconsin's 2012 gubernatorial recall election," he wrote in the declaration.

"I generally supported the Governor's efforts to balance the State budget," Schmitz wrote.

Schmitz also makes clear that he is the one calling the shots in the probe. “While I have sought input and counsel from others involved in the investigation, I have made the final decisions on what actions to take and the content of pleadings and other filings,” Schmitz wrote.

Schmitz said that he became a member of the Republican Party "in connection with seeking the Presidential appointment as the United States Attorney" for Milwaukee after the 2002 election; President George W. Bush instead chose Steven Biskupic, who now represents Walker's campaign in the John Doe investigation.

The other key allegation in O'Keefe's federal complaint was that prosecutors selectively targeted O'Keefe and WCFG, and ignored "materially identical" activities by Democrats or liberal groups. WCFG devoted seven pages of its federal complaint to this "materially identical" conduct, which allegedly showed that WCFG and other "targets of the investigation were selected based on political views and associations."

In Judge Randa's April 8 decision rejecting the motion to dismiss, he appeared to find the possibility of a prosecutorial double-standard compelling. “The underlying theory of this case is that O‟Keefe, along with other conservative groups, are being targeted for their political activism, whereas the 'coordination' activities of those on the opposite side of the political spectrum are ignored,” he wrote.

Yet in the latest round of filings, prosecutors call into question the "underlying theory" of the case.

O'Keefe is "either misinformed or willfully misleading in suggesting that the Milwaukee District Attorney’s office selectively prosecutes conservatives," they wrote. O'Keefe and WCFG "rely on a few internet blogs and news articles for their entire support" of those claims.

Prosecutors noted multiple high-profile examples of prosecutions of Democrats or left-leaning groups -- most notably, a $20,000 fine against the campaign committee for Tom Barrett, Walker's opponent in the 2012 recall and 2010 gubernatorial elections. Barrett was fined for exceeding the $700,830 limit on how much a gubernatorial candidate can accept in PAC contributions: he received $720,931 in PAC contributions during the 2012 recall elections, which his campaign called an "accident" attributable to the intensity of the campaign.

Prosecutors also listed other recent examples, all available in the public record, of convictions of individuals who falsified information on recall petitions, the prosecution of a Democratic state senator for illegal electioneering and a Democratic Milwaukee County Supervisor for misusing campaign funds, and the investigation of a left-leaning organization for alleged election bribery. Many of the investigations were conducted via the John Doe proceeding.

“Those examples are just some of the cases in the public record that plaintiffs have utterly failed to acknowledge by instead selectively citing to the internet articles in support of their claim,” the prosecutors wrote. "No court has also ever granted the extraordinary remedy of a preliminary injunction on such undeveloped and unreliable 'evidence.'”

Also filed with the court were over 100 pages of documents showing that the Government Accountability Board (GAB) and other state agencies have pursued prosecutions of both parties in the past -- and rejected complaints filed by Democrats or liberal groups against Republicans.

Because the underlying John Doe probe is conducted in secret, many of the filings are redacted. Yet they do note that the GAB, the state elections board composed of retired judges from both parties, unanimously approved the investigation.

"Ruling Could Open the Flood Gates to Impropriety"

Although the probe has more recently been spun as a question of whether it is motivated by partisan animus, what is at stake is the integrity of Wisconsin elections.

WCFG and the Walker campaign have argued that the coordination under investigation in the John Doe is not illegal, since WCFG and other independent groups ran "issue ads" -- those thinly-veiled election messages that stop short of explicitly telling viewers to vote for or against a candidate.

Issue ads are not specifically mentioned in Wisconsin's statutes, but Wisconsin courts have previously held that a group can violate election law if their electoral issue ads are coordinated with candidates. (In federal elections, such coordination would be strictly prohibited.) In early January, the judge overseeing the John Doe probe in the state, Judge Gregory Peterson, quashed subpoenas on grounds that Wisconsin's statutes do not explicitly address coordination between campaigns and issue ad groups, yet stayed his order so an appellate court can resolve the dueling interpretations of Wisconsin law.

As CMD has described, allowing such coordination would open the door to even greater levels of political corruption, since independent groups running "issue ads" can accept unlimited, secret donations, whereas contributions to candidates are capped and must be disclosed. If a candidate and issue ad group are working together, a million-dollar, secret donation to a group like Wisconsin Club for Growth would be effectively the same as a direct contribution to Scott Walker, raising a serious risk of corruption and undermining the contribution caps -- and, allowing it all to pass without disclosure, in secret.

In the latest round of filings, prosecutors describe a similar risk. Blocking the investigation "would allow candidates to solicit large amounts of money through the guise of a 501(c)(4) organization and then direct those expenditures to benefit the candidates’ campaign. Such a ruling could open the flood gates to impropriety and undermine Wisconsin’s system of campaign finance regulation," special investigator Dean Nickel wrote in a court filing.

Not surprisingly, right-wing media has been silent about these latest filings. Will national press start to pay attention?