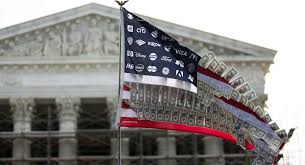 Chief Justice John Roberts, writing for the majority in McCutcheon, now appears to acknowledge that big donations to independent Super PACs can be useful to candidates -- and arguably, pose a risk of corruption -- yet somehow uses these facts as justification to strike down the total amount that individual donors can give to federal candidates and political party committees.

McCutcheon builds on the Court's awful ruling in Citizens United, which kicked open the door to unlimited fundraising and spending by nominally "independent" corporations like Super PACs and dark money nonprofits. Limits on both independent expenditures and direct contributions can now only be justified if they prevent "corruption," which the court has narrowly defined as "quid pro quo corruption" like bribery.

Thanks to the McCutcheon decision, the small handful of billionaires and millionaires who were previously constrained by the aggregate contribution cap of $123,200 per election cycle can now dole-out up to $3.6 million among candidates and committees. The ruling left in place, for now, the $2,600 limit on direct donations to a single candidate, and the $32,400 limit on donations to a single party committee.

Yet in doing so, the Court revealed how its reasoning in Citizens United was flawed.

Independent Expenditures Are of Zero Value to Candidates?

The Court has long held that candidate contribution limits are subject to less scrutiny than independent spending limits, but in Citizens United the court took it to a new extreme.

In Citizens United, the Court struck down all corporate independent spending limits under the theory that ‘[t]he absence of prearrangement and coordination of an expenditure with the candidate or his agent . . . undermines the value of the expenditure to the candidate.’”

In other words, because independent spending is of so little value to a candidate, limits on such spending cannot be justified, since they raise almost no risk of quid pro quo corruption.

In McCutcheon, the Court's right-wing majority appeared to reverse course.

Roberts rejected assertions that striking down aggregate limits would result in money laundering schemes to circumvent campaign contribution laws, since it is so easy to fund a Super PAC that runs independent expenditures -- which he now acknowledges will be at least somewhat valuable to a candidate.

"[A] rational actor," Roberts wrote, would not bother giving to multiple PACs and party committees that would in turn transfer funds to benefit a particular candidate, since "a donor could have spent unlimited funds on independent expenditures on behalf of [hypothetical candidate] Smith."

"Indeed, [a donor] could have spent his entire $500,000 advocating for Smith, without the risk that his selected PACs would choose not to give to Smith, or that he would have to share credit with other contributors to the PACs."

But doesn't the fact that independent expenditures are not "coordinated" mean they undermine the value to a candidate, as the Court held in Citizens United?

"[P]robably not by 95 percent," Roberts wrote in McCutcheon. "And at least from the donor’s point of view, it strikes us as far more likely that he will want to see his full $500,000 spent on behalf of his favored candidate—even if it must be spent independently—rather than see it diluted to a small fraction so that it can be contributed directly by someone else."

For example, in 2012 hedge fund manager James Simons gave $5 million to President Obama's Super PAC, Priorities USA. Assuming just 5% of that total was of "value" to Obama -- which is surely an underestimate -- it amounted to a $250,000 donation. Doesn't $250,000 in "value" raises the potential for quid pro quo corruption?

If Mitt Romney had won in 2012, the risk of corruption would be even more severe. Sheldon Adelson and his wife gave a total of $30 million to Romney's Super PAC, Restore Our Future. Assuming just 5% of that total was of "value" to Romney, it amounted to a $1.5 million contribution.

In McCutcheon, the Court upheld the existing $2,600 cap on direct contributions to candidates, accepting Congress' finding that donations above $2,600 pose a sufficient risk of corruption. Although Roberts did call the $2,600 limit a "prophylactic," an effective contribution of more than one hundred times that amount, or five hundred times that amount, should certainly raise serious concerns about corruption -- however defined.

Following Roberts' logic, the Court could easily find that there is an upper limit for donations to Super PACs or dark money nonprofits -- that there is a point where an independent expenditure can become big enough to pose a risk of corruption, even including quid pro quo corruption.

But don't hold your breath.

As long as there is private money or services given to politicians there will be the possibility of corruption. I believe that there is always a distinct possibility of corruption. We need government financed election campaigns.
A Democracy is a government that works for the people. That is no longer true. With Citizens United, we now have corporations that are people and their money is speech....and can give unlimited amounts of money to buy politicians. With McCutcheon vs FEC, the Supreme Court has left us with millionaires and billionaires giving nearly $6 million in one election cycle to fund politicians. This is the reason politicians don't listen to constituents....only to the money guys! So, does "free speech" mean that politics is about smearing the opposition? Does "free speech" mean the very wealthy have an unfair advantage and influence at the expense of the rest of us? Does "free speech" mean that big bucks can overpower good candidates who want to represent middle class citizens? Where are the fundamental "free speech" rights of those without bank accounts in the millions? The legacy of this Supreme Court will be that they have destroyed Democracy, giving us a "free-market democracy"...everything is for sale to the highest bidder!!