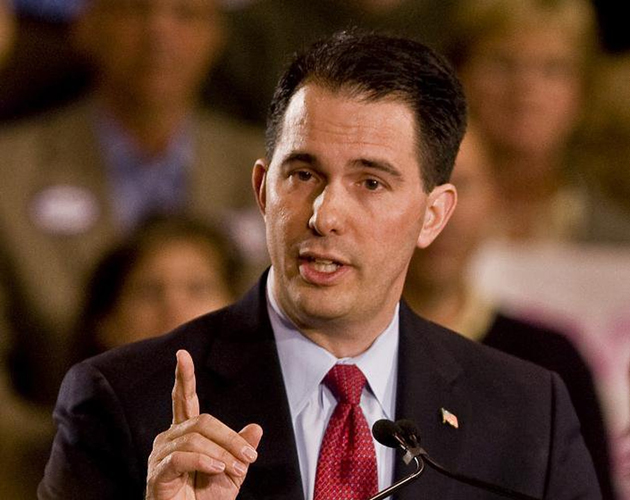 Wisconsin Republicans rolled a raft of anti-democrat measures through the legislature late Thursday night, ranging from additional restrictions on voting to new limits on the right to recall elected officials, following a recall effort against Governor Scott Walker last year.

A proposed constitutional amendment passed by the Assembly on Thursday would limit the recall power that has been part of the state constitution for eighty years.

The constitutional right was exercised in recent years to trigger a recall election for Scott Walker after the newly-elected governor pushed a series of radical measures through the legislature, including restrictions on public sector collective bargaining, cuts in education funding, and voting restrictions; many of the measures were never discussed on the campaign trail and took the state by surprise, prompting massive protests in the capitol. State Senators from both parties were also targeted for recall. Those recall efforts could never have proceeded had the limits passed Thursday been in place.

The broad, unlimited right of recall was added to the state constitution in 1926 during the Progressive Era as a mechanism of accountability. 'Fighting Bob' LaFollette campaign literature from the early 20th Century says: "By the recall, a faithless public official may be retired without waiting for the evil to be fully consummated. Under such a law, the public official will no longer betray his constituency."

Rep. Fred Kessler (D-Milwaukee) echoed those sentiments on Thursday. "What are the authors [of the recall amendment] afraid of?" he asked. "Why in the world are they trying to set aside the ability of voters ... to recall someone who they think made a mistake? ... It's a democratic right of people to be heard and it's something that should not be suppressed."

The proposed amendment passed along party lines but is not a done deal. A constitutional amendment must pass the full Legislature two sessions in a row, and then be approved in a statewide vote; the earliest that could happen in 2015.

The legislature also passed similar limits on recall for municipal and school officials, which need only pass the Senate and be signed by Governor Walker. Ironically, had those restrictions been in place in 2002, they would have quashed the recall effort that led to Walker's rise to power. In 2002, Walker aligned himself with an attempted recall against then-Milwaukee County Executive Tom Ament, who hadn't been convicted of a felony or ethics violation; after Ament resigned, Walker was elected County Executive.

The legislature also voted along party lines to alter the state's voter ID law in the face of legal challenges.

After Governor Scott Walker and a GOP-dominated legislature took power in 2011, Wisconsin was one of several states to pass a law requiring an ID to vote. The law threatened to disenfranchise more than 300,000 voters who did not have the required forms of ID, primarily people of color, students, and the elderly -- voters who had turned out in record numbers just a few years earlier to elect President Obama. Wisconsin's law was subsequently struck down by two separate state courts on grounds that its burdens were too severe and it imposed eligibility requirements beyond those provided by the Wisconsin Constitution. One decision was reversed on appeal, but the other is still in effect and the law remains blocked. The law is also currently being challenged in federal court under Section 2 of the Voting Rights Act.

This latest bill is designed to overcome those legal challenges but would still make it harder to vote for low-income Wisconsinites.

Under the legislation, voters will still be asked to present an ID, and if they do not have one, they must sign an affidavit swearing not only that they do not have the forms of identification required under the law, but also declaring that they either are too poor to get an ID or cannot gather the necessary documentation.

"This bill says that poor people need to declare their indigency. It's a scarlet letter," said Rep. JoCasta Zamarripa (D-Milwaukee).

The bill passed the Assembly 54-38 along party lines and now goes to the Republican-dominated Senate. Its fate in the Senate is uncertain: Majority Leader Scott Fitzgerald (R-Juneau) has said that he would rather wait for courts to rule on the original voter ID legislation before making changes to the law.

Another bill will limit early voting to weekdays between 7:30 a.m. and 6 p.m., effectively ending weekend voter drives in Democratic strongholds such as Milwaukee and Madison. In 2008, President Obama won Wisconsin by 14 points, thanks in part to an aggressive "vote early" campaign where one in five voters cast absentee ballots in-person at their County Clerk's office. After Republicans took control of the state legislature in 2010, they cut the number of days and weekends for early voting in half, from one month before the election to just two weeks. Still, in the 2012 elections at least 392,000 people voted early at their clerk's offices, and Obama again won the state by a sizable margin.

The measure passed Thursday will limit the practice even further, eliminating early voting on the weekends, and during the weekdays, imposing a 6pm cutoff. This would have a significant impact on working people. Last November in Milwaukee County and other larger counties, voters could cast a ballot until 7pm on weekdays, and between 9am and 5pm on weekends. The measure now goes to the Senate.

The legislature also voted along party lines to amend the state constitution to alter the selection process for the state Supreme Court's Chief Justice, changing it from a seniority system to one based on peer selection. The measure appears aimed at ousting Chief Justice Shirley Abrahamson, an independent judge on a court that in recent years has become dominated by corporate-backed jurists, many of whom have been elected with support from the state chapter of the Chamber of Commerce and shadowy out-of-state groups. Spending on Wisconsin's judicial elections have skyrocketed in recent years, shifting the court to the right and helping its reputation to plummet.

Like the recall measure, the amendment must pass two sessions of the legislature and be approved by voters.

Among other things, the Assembly also voted along party lines to approve new specialty license plates that read "In God We Trust" and "Choose Life," and to limit public access to a proposed iron ore mine site in Northern Wisconsin.