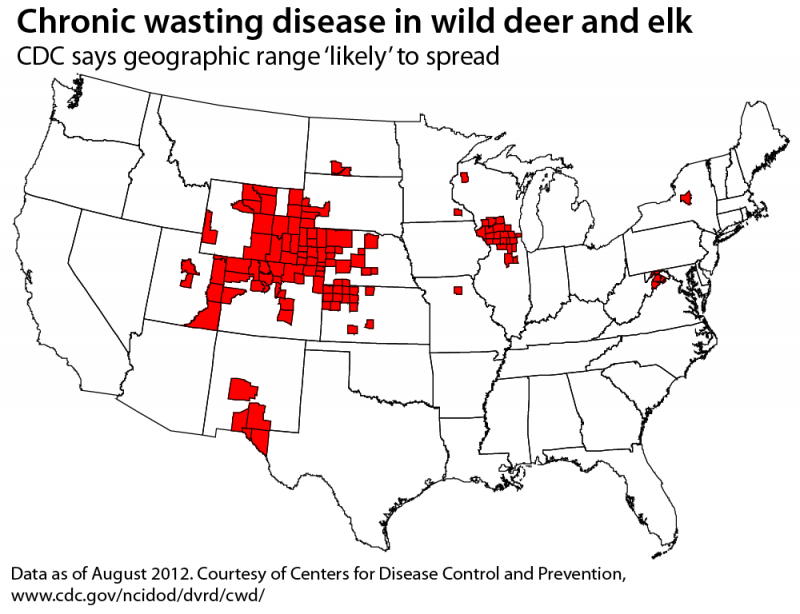 Prions -- the infectious, deformed proteins that cause chronic wasting disease in deer -- can be taken up by plants such as alfalfa, corn and tomatoes, according to new research from the National Wildlife Health Center in Madison.

The research further demonstrated that stems and leaves from tainted plants were infectious when injected into laboratory mice.

The findings are significant, according to the researchers and other experts, because they reveal a previously unknown potential route of exposure to prions for a Wisconsin deer herd in which the fatal brain illness continues to spread. The disease has also become a pressing issue nationwide: The national Centers for Disease Control and Prevention has identified the deer disease in 17 states and predicts it will spread to other states.

In Wisconsin, where the state Department of Natural Resources has scaled back its efforts to slow the spread of CWD, some critics say the new research should cause the agency to revisit its approach.

Michael Samuel, a CWD researcher and wildlife ecology professor at the University of Wisconsin-Madison who was not involved in the plant research, said the new study is significant. Previous studies have shown the disease can be transmitted animal-to-animal and via soil.

"It's important because it identifies a potential pathway," Samuel said of the study.

Christopher Johnson, who conducted the study, wrote in the abstract: "Our results suggest that prions are taken up by plants and that contaminated plants may represent a previously unrecognized risk of human, domestic species and wildlife exposure to CWD."

The research has not yet been submitted for publication in a scientific journal.

The study focused on those prions similar to those causing CWD in deer.

The disease is one of a class of neurological, prion-caused diseases known as transmissible spongiform encephalopathies, including scrapie in sheep and goats, bovine spongiform encephalopathy -- or mad cow disease -- in cattle, and Creutzfeldt-Jakob disease in humans. CWD was discovered in Wisconsin's deer herd in 2002 and has been found since the mid-1990s in northeastern Colorado and southeastern Wyoming.

Johnson is scheduled to present his research at the annual meeting of The Wildlife Society in Milwaukee in October. Johnson studies CWD at the federal wildlife disease center, which is run by the U.S. Geological Survey. His earlier work found CWD prions can linger in and be amplified and transmitted by soil.

James Kazmierczak, the state public health veterinarian, said that a molecular species barrier, though little understood, appears to have so far prevented the CWD prions from making people and cattle sick.

Also, Kazmierczak said, data reported to the Wisconsin Division of Public Health show little deviation from the national rate -- a little above one case per million people -- in annual cases of Creutzfeldt-Jakob Disease. Nor, he added, does data on more than 800 Wisconsin hunters who have consumed CWD-tainted venison show any human cases of prion brain disease.

Nationwide, according to the CDC, "no strong evidence of CWD transmission to humans has been reported."

Even so, the threat of CWD transmission by crop and food plants -- and the newly discovered potential for exposure to humans and livestock -- has prompted some to say the state Department of Natural Resources should reconsider its CWD policy.

"That is very disconcerting," George Meyer, executive director of the nonprofit Wisconsin Wildlife Federation, said of the research.

"My impression," said Meyer, a former DNR secretary, "is (that) it should cause a major review of the very weak CWD strategy that is being pursued by the DNR."

Dave Clausen, former chairman of the Natural Resources Board and a veterinarian who has studied CWD, has also criticized the DNR for being passive on the disease.

He agreed with Meyer that the new research should give the agency pause. He said the potential presence of prions in plants is not only a public health concern but "has big implications for our agricultural economy, not just in this state but all across the country." 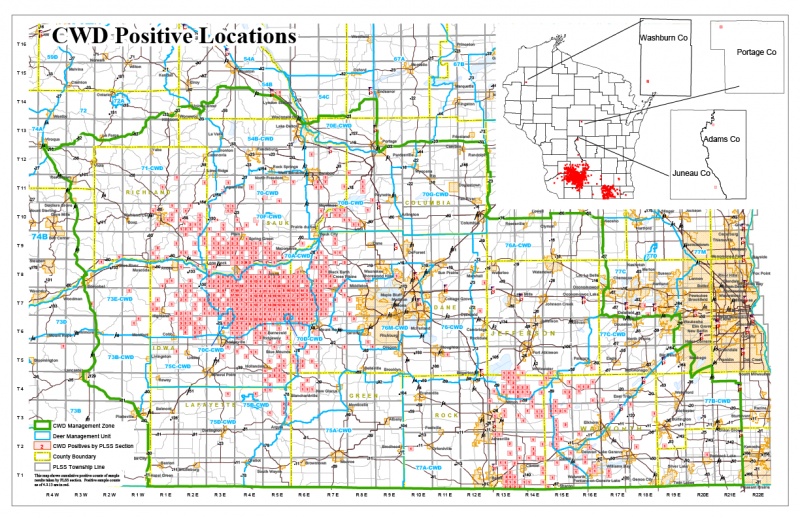 Disease has Spread in Wisconsin Deer

Soon after the discovery of CWD in Wisconsin, the DNR embarked on an aggressive effort to halt spread of the disease by putting in place additional and longer hunting seasons, requiring hunters to shoot a female deer before taking a buck, and hiring sharpshooters to kill deer.

But the ambitious program grew unpopular with hunters and landowners, and the number of hunters participating in the state's annual deer hunt declined. Meanwhile, the disease spread.

The DNR reports that prevalence of the disease has increased in all sex and age classes of deer. During the past 11 years, for example, agency data estimates prevalence in adult males has risen from 8 to 10 percent, to more than 20 percent. And in adult females, the prevalence has grown from about 3 or 4 percent to about 9 percent.

In a disease hot spot in southwestern Wisconsin, CWD prevalence has increased to 27 percent among deer 2 ½ years or older, according to DNR statistics. The growth was called "frightening" by Robert Rolley, a DNR researcher who worked on the study.

And the disease has spread far beyond where it originally showed up. Two years ago, the disease was discovered in a doe in Washburn County in northeastern Wisconsin. Testing has turned up no other infected deer in the area.

Gov. Scott Walker promised hunters while campaigning that he would reevaluate the agency's approach to deer hunting and the disease. After his election, he hired Texas deer expert James Kroll for the job.

Kroll downplayed the potential impact of CWD, both in his report to Walker and in a July white paper on the disease. He did not return phone calls seeking comment on the prion plant study.

In the white paper, Kroll cited studies of the Wisconsin deer herd from 2003 to 2007 showing no increased mortality rates from CWD. He also wrote, "it is my opinion CWD does not pose a threat to human health," citing studies on the lack of transmission.

He recommended the agency take a "more passive approach" to the illness.

As a result of hunter concerns and Kroll's report, the DNR has eliminated many of the extra hunting seasons and regulations intended to reduce herd size and slow the spread of the disease. Testing for the disease has also dropped off.

Tom Hauge, who directs the DNR's wildlife management program, said the new research is unlikely to cause the agency to reevaluate its CWD program.

"Current management is grounded in the reality of the present conditions," Hauge said. "There is no science to indicate that human health is at risk to date. And livestock to date have not been impacted. That reality has shaped the socioeconomic response."

Hauge also said the current political atmosphere has been a factor. He said the special CWD regulations "wore thin on people" and that "manifested itself in a gubernatorial campaign."

"Until that landscape changes," Hauge said, "we have to live with the realities we face right now."

Tami Ryan, who heads the DNR's Wildlife Health Section, helped organize The Wildlife Society session at which Johnson will present his findings. She said she invited him because the agency is interested in learning more about the research. She called the initial work "very important research" but said she wants to see more data, especially on whether lab animals can become infected by eating tainted plant material rather than just via injection.

"I'm also interested in the contamination level," Ryan said. "What is the concentration and frequency of exposure that would result in infection? Is this as great a risk as coming into contact with another infected animal? A level of risk assessment is necessary."

For the moment, she said, "I don't hear alarm bells."

Johnson said he is testing whether animals can become infected by eating CWD-laden plant tissues. He also said future work will address the questions raised by Ryan about the prion concentrations in plants necessary to cause infection.

But Bryan Richards, CWD project leader at the National Wildlife Health Center, said even the findings to date should be taken seriously by state and federal wildlife and public health agencies.

"The potential for exposure is undeniable," Richards said.

Can humans get CWD?

Clausen said the plant research should be considered in the context of other CWD studies. He said research has shown the molecular barriers that seem to have protected humans from infection may be more porous than some believe.

In 2004, for example, a CDC study published in the scientific journal Emerging Infectious Diseases concluded that the transmission of bovine spongiform encephalopathy, or mad cow disease, to humans indicates that "the species barrier may not completely protect humans from animal protein diseases."

The article also cited lab studies in which CWD prions were found to infect human prion proteins. Still, the article concluded, "limited investigations have not identified strong evidence for CWD transmission to humans."

Another study, led by Marcelo Barria from the Mitchell Center for Alzheimer's Disease and Related Brain Disorders at the University of Texas and published in the March 2011 issue of the Journal of Biological Chemistry, showed that CWD prions in the laboratory can be manipulated over generations to change and become more infectious to humans.

"Our findings lead to a new view that the species barrier should not be seen as a static process but rather a dynamic biological phenomenon that can change over time when prion strains mature and evolve," the researchers concluded.

Such science, Clausen said, should raise questions about a management approach to CWD that does not stem the spread of the disease and, as a result, increases the risk of human and animal exposure.

"The DNR's official approach to environmental contamination with CWD prions has been a yawn and a shrug. Whether concerns from consumers, public health officials or agricultural interests will change that is an open question at this time," Clausen said.

John Stauber, an activist and co-author of the book "Mad Cow USA," said the new research should be especially sobering in a nation he believes is ignoring a possible dangerous public health threat.

"The implications of prion diseases potentially (spreading) via contaminated agricultural plants is mind-boggling," Stauber said. "Imagine people, wildlife or livestock eating a cereal or vegetable that could years or decades later cause an incurable, fatal brain disease."

"The best scientists have always warned that with prions, all bets are off. There is no other deadly disease agent as bizarre or invisible. Unfortunately, federal and state food and wildlife agencies have been ignoring the prion threat, downplaying its human health risks, cutting back on research, and pretending this will all go away. It won't."

The article originally appeared in WisconsinWatch.org.