In the Fight for Secrecy, Are the Koch Brothers Like Rosa Parks? | PR Watch

In the Fight for Secrecy, Are the Koch Brothers Like Rosa Parks?

Civil rights organizations like the NAACP and groups dedicated to overturning the U.S. Supreme Court's Citizens United decision have found common ground in recent months, coming together under the "Money Out, Voters In" banner to fight the dual threats of money in politics and voter suppression. But on the other end of the political spectrum, right-wing activists like Karl Rove are drawing parallels between heroic African-American civil rights activists in 1950s Alabama and privileged 1%ers like the Koch brothers, arguing that a 1958 Supreme Court ruling protecting the NAACP's membership list should allow the super-rich to write million dollar checks without the public ever knowing.

As the Center for Media and Democracy and the U.S. Public Interest Research Group (USPIRG) demonstrated in the report "Elections Confidential," the corrosive influence of money in politics was amplified in 2012 by the fact that in many cases we don't know which individuals or which corporations actually provided much of the funding to affect election results.

And an effort is underway to elevate this secrecy as a "right" for the ultra-wealthy by comparing mild nuisances faced by megadonors to the mortal threats that confronted civil rights activists in the 1950s and 1960s.

The landmark First Amendment case NAACP v Alabama considered whether the State of Alabama, which was complicit in efforts to intimidate and threaten African-American civil rights activists, could force the state's NAACP chapter to divulge its member list. 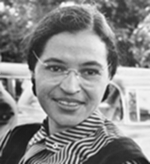 The case arose in the context of the Montgomery bus boycotts that were triggered after Rosa Parks refused to give up her seat in December of 1955. Southern whites responded to the growing civil rights movement with coordinated terror campaigns, firebombing homes and churches and physically attacking African-American men, women, and children. After the University of Alabama admitted its first black student, a crowd of 1,000 protested outside the campus chanting "let's kill her," and she was promptly expelled. Martin Luther King Jr's house was firebombed in January of 1956, followed by a wave of other bombings. Law enforcement failed to prosecute the offenders, and in some cases local government worked hand-in-hand with the Ku Klux Klan to persecute civil rights activists.

It was that year when Alabama subpoenaed the NAACP's membership list.

"The goal [of demanding the membership list] was to put the NAACP out of business," Dale Ho, a lawyer at the NAACP Legal Defense Fund, tells the Center for Media and Democracy. "If the membership list became public, people would stop donating and joining [out of fear for their own lives], and the organization would seek to exist."

When the case reached the U.S. Supreme Court in 1958, the justices held that releasing the NAACP's membership list would endanger members' First Amendment freedom of association rights, since NAACP members had shown they faced severe intimidation both from private actors like the KKK and government officials if the list were made public.

Opponents of election-related donor disclosure laws have cited NAACP v Alabama to disguise the identity of the corporations or individuals writing million dollar checks to Super PACs or backing controversial ballot initiatives. So what do big-dollar political donors like the Koch brothers have in common with civil rights era NAACP members? Ho says very little.

"There is an incredibly wide gulf between threats faced by NAACP members in the 1950s and 1960s and today's wealthy donors," he said.

Donors to Super PACs or dark money nonprofits are hardly powerless or disadvantaged parties who won't be protected by law enforcement against private actors, nor do they face prosecution from the state if their identities are made public. Indeed, in some cases donors have said they are spending on elections in order to blunt ongoing federal investigations.

But that hasn't stopped Rove and others from comparing disclosure of wealthy Super PAC donors with efforts to intimidate NAACP activists in the South.

"[Supporters of transparency] want to intimidate people into not giving to these conservative efforts, and I think it's shameful," Rove told Fox News in April of 2012. "I think it's a sign of their fear of democracy. And it's interesting that they have antecedents, and the antecedents are a bunch of segregationist attorney generals trying to shut down the NAACP."

Heritage Foundation legal fellow Hans von Spakovsky elaborates further. "You look at the kind of intimidation and harassment that has occurred in the past year or two towards conservative political donors, and it makes you realize that the Supreme Court got it right" in NAACP v Alabama, he told NPR.

The NAACP's Ho disagrees. "You're living in an alternate universe when you think the threats faced by NAACP members in the 1950s and 1960s are at all comparable" to those faced by wealthy donors today, he said.

Courts have largely rejected the application of NAACP v Alabama in recent legal challenges to disclosure regimes. In one case, supporters of California's anti-gay marriage ballot initiative Proposition 8 invoked NAACP v. Alabama to support their claim to anonymity, alleging that supporters of Proposition 8 had endured "nothing short of domestic terrorism." The examples of "domestic terrorism" in the case included awkward silences and "looks of disdain" from openly gay members of a plaintiff's country club.

Ho acknowledges that one "need not face the same level of terrorism and violence as NAACP members in the 1950s to require anonymity to ensure freedom of association." But context matters. The concern in the NAACP v Alabama case was not only about potentially "chilling" participation, but also about not removing disfavored voices from the policy debate.

"The underlying principle of [NAACP v Alabama] is the notion that the democratic and deliberative processes are best served by hearing from a wide array of viewpoints," Ho said. The court intervened in 1958 to ensure an unpopular perspective that was in the minority would not disappear as a result of state action.

"If the NAACP did not have anonymity in its member list it would not have existed," he says. "The Chamber of Commerce is not in same danger of not existing today if its member or donor list were disclosed."

Large donors to Super PACs and dark money nonprofits already have significant levels of power and clout in American society, as well as access to (and influence over) policymakers. "There is something perverse about the powerful invoking cases and principles that protect the relatively powerless so they may participate in democracy, in order to protect their own status and influence," Ho said.

Money Out, Voters In

During the last election cycle Americans not only saw an explosion in multi-million-dollar checks with an ever-smaller pool of people providing the majority of funding for political campaigns, but also a variety of efforts to roll back the gains of the civil rights era and narrow access to the ballot box through voter suppression measures like voter ID.

The basic principle uniting campaign finance reformers and groups like the NAACP under the "Money Out Voters In" banner is that democracy is best served when we have the widest participation possible, both in terms of political spending and voter participation.

And at the same time that large donors are using their vast wealth to amplify their voices beyond those of the average person -- taking full advantage of the U.S. Supreme Court's Citizens United v FEC decision -- they are invoking cases designed to protect the voices of the powerless and promote democratic participation. "Are the folks opposing disclosure looking to enhance the deliberative process in our democracy," Ho says, "or are they trying to escape accountability in a way that would actually undermine that process?"

They have apparently been told to get into the back of the limo too many times and are demanding their rights. Their efforts represent the worst of Bull Connor racists by mocking the work and sacrifice of heroic people.
Why are the Koch brothers relevant? Who cares? Don't buy their stuff and/or boycott them.
If the privileged and vastly wealthy can use NAACP v Alabama to keep their names secret, why can't the same be used to give others the same amount of money to spend on elections? Others with less money are discriminated against for the simple fact they are not wealthy. It would only be fair that the money spent to sway elections be shared equally so many will not be suppressed.
Raleigh McLemore is right---the Koches should be considered on the same level as cockroaches---not anywhere near the elevated status pf heroic Rosa Parks.
I would put them more in league with snail vomit.
Over the years I've watched the Republicans (and a few Democrats) bow down to these brothers from Hell. They met with Mich. Gov. Snyder in May 2011 after the protest during the Blossomtime Parade in Benton Harbor, Mich., right after Act 4 was put in full force. WE THE PEOPLE must demand transparency when it comes to these snakes--and others like them. (such as Whirlpool Corp.--"Puppet-master" of Berrien Co., Mich.) The morons in office need to do some serious soul-searching,(if they actually have one!!)and look at all the harm they have brought on the American citizens. Not ALL money is GOOD money. And, personally, I would NEVER accept a single cent from The Koch Bros. (or Whirlpool) To me, that money comes straight out of Hell.