61 Super PAC Donors Gave as Much Money as 1.4 Million Small Donors to Campaigns

Just sixty-one individuals gave $285.2 million to Super PACs in the 2012 elections, contributing the same amount as 1,425,500 small grassroots donors to the major party presidential candidates, according to a new report from Demos and U.S. PIRG.

This report, the fourth in a series, focuses on "the overwhelming influence of a tiny number of wealthy donors."

Approximately $1.28 billion was reported as being spent on the 2012 elections, almost half of it coming from the Super PACs made possible by the U.S. Supreme Court's decision in Citizens United v. FEC. 60.4% of all the money Super PACs raised in the 2012 cycle came from just 132 donors giving at least $1 million each.

"The only way to stop the flow of unlimited money into our elections and the best way to curb the influence of large donors is to overturn the 'money equals speech' precedent in the 1976 Buckley v. Valeo decision, either by constitutional amendment or by Supreme Court revision," the report's authors write.

Until that happens, Demos and US PIRG offer policy suggestions for the interim. 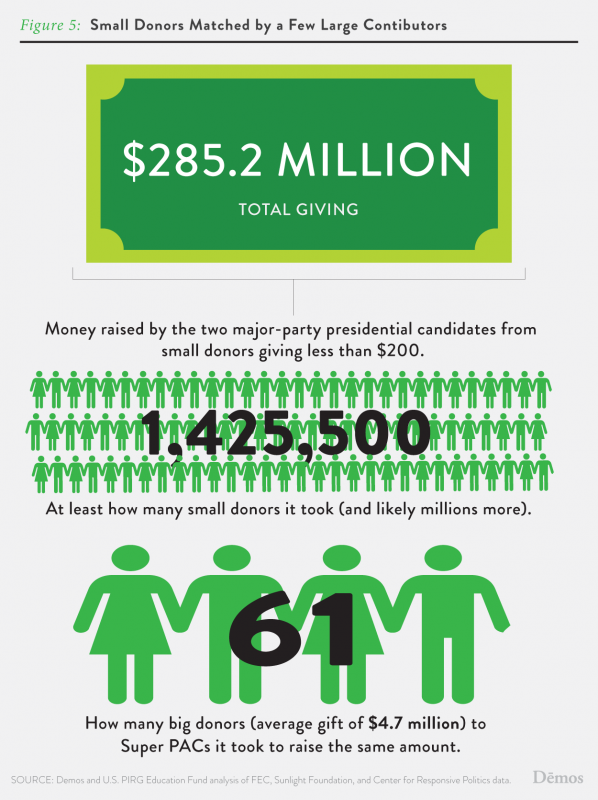 One proposal is tax credits for small dollar campaign contributions, and matching those contributions with public funds. The report's authors say this would "significantly increase donor participation among non-wealthy Americans," helping small donors to find some parity with the wealthy funders bankrolling Super PACs.

Another is for Congress to "empower shareholders at corporations to have final say on whether the corporations they own may spend money in elections, thereby creating a minimum system of people-powered checks and balances on business money in politics."

In a press release, Demos Counsel Adam Lioz explained the problem with a few wealthy donors overwhelming the voice of the many. "The wealthy care much more about deficits, average Americans care about jobs, and guess what Washington will be obsessing over for the next few weeks? Hint: it's not major programs to get folks back to work. He who pays the piper calls the tune, and we know that most rich donors dance to different music than the majority of Americans."

The report's authors conclude: "Rather than seeing Tuesday's results as an indicator that big money in politics is not a problem, our freshly elected legislators, in particular those who fought back against special interest outside spending should see the results as a mandate for reform."