Can Brats Build Bridges in Wisconsin?

On June 12, Wisconsin Governor Scott Walker held the "Beer and Brat Summit," touted as an effort to bring lawmakers from both parties together, although some lawmakers from both sides of the aisle found reasons not to attend this PR event. Brats are a Wisconsin tradition but even they have become politicized over the past year with one of the major brat makers financially backing Walker's political campaign.

Walker's PR Plan to Use Beer and Brats

Ninety-eight state lawmakers -- 60 Republicans, 37 Democrats and one independent -- said they planned to attend the event, which offered a spread of beer, brats, and other specialties from the Dairy State.

Walker said in a statement that he hoped the two-hour event would forge relationships and "make it easier to work together to help create jobs." Critics have disputed Walker's claimed focus on job creation since the first measures he pushed limited the rights of injured Wisconsin residents and limited the rights of public workers. He also pushed through almost a billion dollars in tax cuts for wealthy corporations and individuals while cutting almost a billion dollars in education budgets, raising serious objections that workers are being required to pay more than their fair share while corporations are paying less. While dividing the public, Walker's resulting jobs numbers are dismal compared to other states.

Some Wisconsin Lawmakers Boycott the Summit

Representatives Mark Pocan and Kelda Helen Roys -- Madison Democrats running against one another in the Democratic Congressional primary -- and Republican State Representative Steven Nass issued public announcements saying they would be declining the invitation to the governor's mansion.

Pocan called the event a media stunt and said, "True bipartisanship will only occur through concrete action made by Governor Walker. Those actions take real conversation in the State Capitol where we have been rebuffed over and over again." Pocan gave his own suggestion for forging relationships. "A first step towards reconciliation would be for the Governor to apologize for his statement to 'divide and conquer,'" his statement said.

Roys told the Milwaukee Journal Sentinel, "I'm not going because I think that there's no trust right now," and, "There's no sincerity in his approach."

"Let's actually do something bipartisan first, then once we actually have a little sense that this is sincere... then let's go to the mansion and celebrate that."

Democrats are not the only ones passing on what Walker is dishing up at the Summit. Representative Nass, a Republican, boycotted the summit because of comments made by state Democratic Party chair Mike Tate: "Scott Walker will see the inside of a jail cell before he sees the inside of another term." Nass also criticized comments made by state Senator Fred Risser. "Democratic leaders continue their offensive comments and threats of legislative chaos," he said. "We encourage our children to stand up to bullies. That's exactly what must happen in the Legislature." Nass claimed Democrats were bullies while never calling for any apology for Walker's divide and conquer approach, which the Governor also has never disavowed.

Brats Have Become Political in the State

In the past year, politics and brats have not mixed well in Wisconsin.

One of the state's largest bratmakers, Johnsonville Sausage, received heat when it was revealed that its top executives had donated more than $40,000 to Walker since 2005. At the height of the Wisconsin uprising, Johnsonville and other big Walker donors were targeted for boycotts.

This news had consequences for the World's Largest Brat Fest, a Memorial Day Weekend tradition celebrated in Madison for the past 30 years. The bratfest relied on donations from Johnsonville. In protest, concerned citizens organized alternative bratfests in 2011, like the "Alt Brat Fest" and the "People's Bratfest," and donated proceeds to local charities.

Walker served Johnsonville at the beer and brat summit. But he also served brats from Usingers, Trig's, and Brat Stop.

Walker said the brats were mixed up just like the lawmakers and staff.

Some Say "Brats and Croquet Won't Make It Okay"

The thirty-four lawmakers who declined Walker's invitation are not the only ones perturbed by the beer and brat summit.

It is not known whether the Women's Christian Temperance Union approved of Rep. Scott Suder's comments after the cookout: "The governor did a hell of a job," and "He's a hell of a cook." 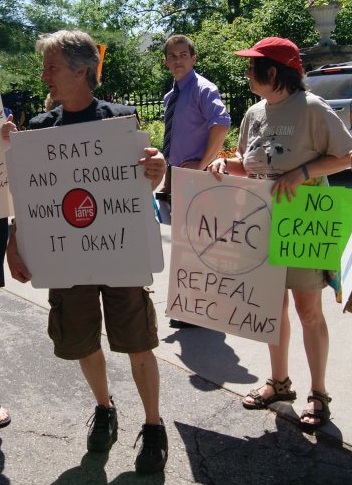 Protestors also gathered outside the Governor's Mansion, slightly outnumbering press who were eager to get pictures of the event from outside the iron gates. The press was not invited inside the event.

About 30 people held signs outside the mansion, including Greg Gordon, who told CMD, "We're not saying that they shouldn't have beer and brats, we just want to remind everyone what they're really getting into, which is a photo-op." He also commented on the large number of press who showed up. "I didn't see this much coverage when information about the John Doe investigation was uncovered."

Mike Dickman, who frequents the Capitol with signs made out of Ian's Pizza boxes, made one for the day that read "brats and croquet won't make it ok."

Despite saying the press was not invited, newspapers ran front page stories the next day with pictures of Walker smiling and chatting with Democratic legislators.

From James Rowan: http://www.jsonline.com/blogs/purple-wisconsin/158992875.html#!page=0&pageSize=10&sort=newestfirst Looks like Scott Walker 2.0 is really the 1.0 version - - on the attack, dropping bombs and tossing out red meat he didn't grill for his guests Tuesday. How else do explain that less than a day after serving up brats, beer and good vibrations at the Governor's Mansion, Walker jetted off to Washington, DC and told that group that public worker benefits were "a virus." Was he taking his cue from talker Charlie Sykes, who had just called teacher unions more powerful than the Mob? Details, and audio of Walker's remark, here.