Some Wisconsin Women “Mad As Hell”

Hundreds of protestors showed up to the "Mad as Hell" rally on the Wisconsin State Capitol steps March 13 to protest a series of bills being pushed by Republican lawmakers that would take away a number of women's rights and interfere with women's access to health care in the state.

The rally was led by The Wisconsin Alliance for Women's Health, Planned Parenthood of Wisconsin and a number of other women's rights groups.

"Unfortunately, we have one of the most anti-women's health, anti-choice, anti-birth control legislatures that Wisconsin has ever seen," said Tanya Atkinson, Executive Director of Planned Parenthood Advocates of Wisconsin.

Protests centered around two bills that were previously passed by the Senate and were awaiting Assembly approval. The bills are: AB 154/SB 92, which prohibits coverage of abortions through health plans sold through exchanges, and AB 337, which would repeal Wisconsin's Healthy Youth Act and would allow schools to teach abstinence only education. The bills are expected to be signed by Governor Scott Walker once passed by the Assembly.

The State Legislature has also introduced bills that would limit where Wisconsin women can get cancer screenings and treatment, that would define human life as beginning at conception, and that would honor "crisis pregnancy centers," the clinic arm of the anti-abortion movement.

"We are out here today to raise our voices so that they can hear us. They have one last chance not to vote on these, not to push these bills through," said Atkinson, "If they go ahead and push them through, we are here to rally and we're here to say that women are watching and that women vote." 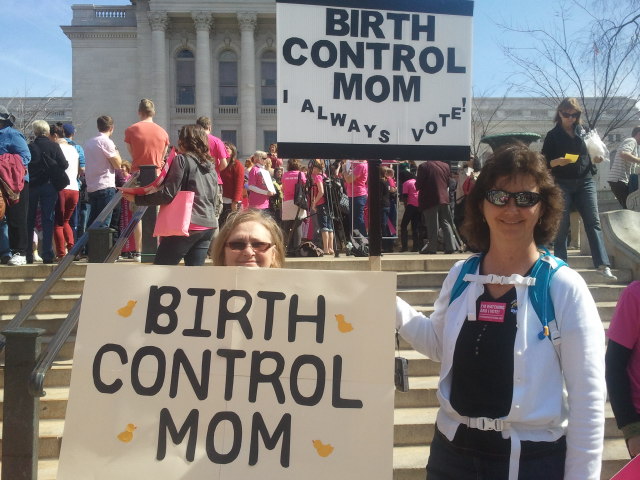 Women's rights have been under consistent attack in the state since Republicans took control of both houses and the governor's office. Governor Walker's budget bill repealed the 2009 "contraceptive equity" law that required health insurance plans in the state that cover prescription drugs to include contraceptives. The law was set up to ensure that health providers don't discriminate against women. Walker called it an "unacceptable government mandate on employers." More recently, Walker has eliminated all funding for Title V, the only state-funded family health care program that provides health care services to the uninsured, access to birth control, treatment for sexually transmitted diseases and a variety of cancer screenings for both men and women. In addition, a bill that makes it harder for women and other groups to secure their rights to equal pay for equal work passed the legislature in February.

"To the women of Wisconsin, I invite you to engage, to learn, and to be empowered, to take back your health, your economic opportunities, and our state for the Wisconsin we need and deserve," shouted Sarah Nobel, the Coordinating Director for the Milwaukee Reproductive Justice Collective.