Isabel Salas reported to the non-profit Cornucopia Institute (Cornucopia) the difficulties she faced when her infant daughter reacted badly to a set of additives present in most baby formulas: DHA and ARA oils. Containers of formula containing these additives say things like, "Our formula is proven in clinical studies to enhance mental development" and "as close as ever to breast milk."

But Salas isn't the only mother who has faced these problems. The U.S. Food and Drug Administration (FDA) has recorded at least 98 self-reported incidents (PDF) of adverse reactions in infants that could be confidently linked to intolerance to these additives, according to records obtained through a Freedom of Information Act (FOIA) request by Cornucopia in 2008. The majority of these reactions involve severe gastrointestinal distress, prolonged periods of vomiting and painful bloating.

Many of these parents only found out that there was a problem with their infant's formula when they accidentally tried a brand without DHA and ARA additives and noticed obvious improvements. Cornucopia has called the many reports to the FDA of infants' adverse reactions to these controversial additives "only the tip of the iceberg" because "most parents remain unaware that Martek's DHA and ARA oils may be the cause of their infant's problems."

Yet not only have these additives been approved by the FDA as "Generally Recognized as Safe" (GRAS), but they have even been approved as additives to certified organic products. They are often listed in product ingredients under the trademarked names "life'sDHA™" and "life'sARA™."

Both DHA and ARA are long chain polyunsaturated fatty acids (LCPUFAs), which when naturally present in human breast milk and in human diets, have been shown to be critical to brain and vision development (PDF). Martek owns several patents related to the process of extracting these naturally-occurring fatty acids from non-food organisms. Martek's DHA oil is an Omega-3 additive produced from algae, and its ARA oil is an Omega-6 additive produced from a fungus. These oils are extracted using petrochemical solvents (PDF, p. 2), including the potential neurotoxin hexane.

When the FDA granted Martek's DHA and ARA oils conditional GRAS status in May 2001, its accompanying letter expressed the following concerns:

"[S]ome studies have reported unexpected deaths among infants who consumed formula supplemented with LCPUFAs. These unexpected deaths were attributed to Sudden Infant Death Syndrome (SIDS), sepsis or necrotizing enterocolitis. Also, some studies have reported adverse events and other morbidities including diarrhea, flatulence, jaundice, and apnea in infants fed LCPUFAs."

The decision notes that the approval of the ingredient does not negate the responsibility of infant formula manufacturers that include the additives to monitor and submit reports on adverse infant reactions to the FDA.

However, none of the companies selling formula and other products containing the DHA and ARA oils have monitored reactions to these products and reported back to the FDA, according to the 2009 results of a FOIA request (PDF) made by Cornucopia. The 98 adverse reactions noted above were self-reported.

Martek's additives are now added to more than 99 percent of American infant formulas, according to the company, as well as baby foods, supplements, milk and other food products. This includes 90 percent (in 2009) of formulas certified as organic by the U.S. Department of Agriculture (USDA).

Given these concerns, why did the USDA approve these controversial additives for organic production? Watchdog groups like Cornucopia and the Organic Consumers Association chalk it up to money: a well-connected lawyer and a paid pundit.

As the Washington Post exposed in 2009, infant formula manufacturers that used Martek's additives in their products hired William J. Friedman, a government relations lawyer, to persuade the USDA that the additives were not only safe, but "natural." As a result (PDF), the USDA classified the DHA and ARA oils as allowed under USDA regulations as "vitamins and minerals." But in 2010, the USDA publicly acknowledged that its previous interpretation was wrong. Not content to accept this setback, Martek and one of its largest customers, Dean Foods (which adds the DHA and ARA oils to its Horizon organic milk and Silk soy milk), made use of Friedman's services again in late 2011 to convince the National Organic Standards Board (NOSB) to recommend approval of the additives.

According to a complaint (PDF) filed with the independent Office of Inspector General at the USDA by Cornucopia, Friedman "misled other NOSB members about the materials under review." Friedman stated on the record that a form of the DHA oil processed using methods and materials "explicitly banned in organic production" was not being considered for approval, when in fact, based on the Martek petition (see, e.g., p. 92), it was. Today Martek ingredients, in products like Horizon organic milk, as well as many infant formulas and baby food, remain on the market.

According to Cornucopia, the emotional testimony of Dr. Alan Greene, a vocal advocate for DHA and ARA additives, also had a big role in Martek's successful petition. 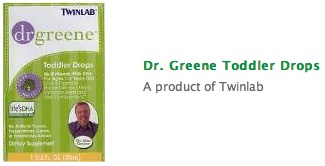 Dr. Greene is a Clinical Professor of Pediatrics at Stanford University and a celebrity with numerous media appearances. His published books include Raising Baby Green and Feeding Baby Green. He was at one time a paid spokesperson for the farmer cooperative Organic Valley, advocating family-scale dairy farming. But he left this post to become a paid advocate for industrial agriculture company Dean Foods and its Horizon organic brand. Dr. Greene has also been a spokesperson for Novartis' "Gerber Wellness" conventional infant care products and has been sponsored to speak on behalf of Mead Johnson's Enfamil Lipil brand. None of these economic interests are currently listed on Dr. Greene's public "Industry Relationships" disclosure.

Dr. Greene testified to the NOSB in favor of DHA and ARA in December (transcript, pp. 49-50). His testimony was emotional, telling the story of his wife's struggle with breast cancer when nursing their son, which he says prevented her from breastfeeding him and sent Greene in search of the best alternative. "I became a citizen scientist in search of what was best for my son. And what I found I shared with others as a pediatrician and a child health advocate. DHA was the issue that led me to my passion for good food as central to good health and to organics as our best hope," he said.

Dr. Greene's testimony, writings, public appearances and public advice to parents could be seen as the advocacy of a true believer or as an example of the "third party technique" of public relations. Dr. Greene did not return the Center for Media and Democracy's request for information about his financial relationship with manufacturers.

Neither Friedman nor Greene can convince some organic advocates and organic farmers of the additives' appropriate use in organic production.

Alexis Baden-Mayer, Political Director of the Organic Consumers Association (OCA), summed up the concerns of many (PDF, p. 116): "[T]he worst news that members of the Organic Consumers Association could ever hear is that there's an illegally approved non-organic substance that may be GMO processed with a neurotoxin and mixed with other non-GMO and synthetic ingredients in an infant formula that's certified USDA organic."

Patty Lovera, Assistant Director of the consumer advocacy organization Food & Water Watch, added (PDF, p. 108), "Consumers should not be reassured that something is listed as generally recognized as safe in that FDA process. That is not good enough for organic."

Tony Schultz, whose family's third-generation farm in Athens, Wisconsin is certified organic, told CMD, "I believe in organic production for a lot of reasons -- health, the environment, etc. -- but most important for me as a farmer is that organic production has created a space for family-scale agriculture for lots of people on the land, for broad wealth and economic democracy, and for healthy rural communities because of that economic democracy. If organic just means organic factory farming" -- such as the scale of farming that companies like Dean Foods represent -- "it doesn't mean anything to me."

For Schultz, who heard Dr. Greene speak at the Midwest Organic and Sustainable Education Service (MOSES) annual conference in 2009 and was taken in by his emotional messages in support of family farming, Greene's PR work for companies like Dean Foods alone is enough to lose his support.

Both Schultz and organic advocacy groups like Cornucopia and OCA are concerned because, they say, the addition of additives like Martek's DHA and ARA oil to the list of approved organic ingredients threatens to weaken public perception of organic production as a whole.

The final decision on the approval of these additives for organic production has not yet been made. It's anticipated that notice will be posted in the Federal Register to give the public an opportunity for comment later this year. To stay apprised of developments, see the Cornucopia Institute website here. To file an adverse reaction report on the FDA's MedWatch site, go here. To learn which products contain Martek's DHA and ARA additives, and which products don't, go here (PDF).