Stop Censorship of the Internet! 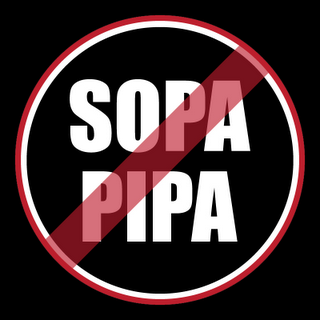 Thousands of websites across America have gone dark this week in protest of supposed anti-piracy bills in Congress.

I first noticed when I went to MichaelMoore.com to see how he was covering the Wisconsin protests, but his site was black with an eerie image of a mouse-controlled light that revealed the message "This site has gone dark today in protest of the U.S. Stop Online Piracy Act (SOPA) in the U.S. House of Representatives and the PROTECT IP Act (PIPA) in the U.S. Senate... We need to kill these bills to protect our right to free speech, privacy and prosperity."

That certainly got my attention, then I noticed that Google was blacked out and Wikipedia was down. Messages about the two bills were posted on sites everywhere. In fact, thousands of websites across America have gone dark today in protest of the bills. Our internet team created a striking banner to our Sourcewatch.org website directing people to the Electronic Frontier Foundation (EFF) to take action and for more information.

The proposed bills, SOPA in the House and the PROTECT IP Act in the Senate, were written to stop online piracy and copyright infringement, say supporters. But Rainey Reitman at EFF writes: "The blacklist bills are dangerous: if made into law, they would hamper innovation, kill jobs, wreak havoc on Internet security, and undermine the free speech principles upon which our country was founded. But deep-pocketed lobbyists are trying to ram this legislation through as quickly as possible, hoping elected officials will turn a blind eye to the widespread opposition to these bills. We can't let that happen."

A vote is anticipated in Congress on January 24.

The good news is that the on-line pressure appears to be working! The LA Times reports today that three co-sponsors of the SOPA and PIPA antipiracy bills have publicly withdrawn their support, including Sen. Marco Rubio (R-Fla.) Reps. Lee Terry (R-Neb.) and Ben Quayle (R-Ariz.) But much more will be needed to beat these bills in Congress next week.

Email your member of Congress by clicking here.

See a whiplist and call your member of Congress by clicking here.

Hahahaha....well that bill seemed to be an overkill....it seems to be that it resulted to too much restrictions. It just seen the advantages of having that anti-piracy but what will be effect on the other side...
To me they knew that the bill they were proposing didn't make sense and it was put there to create a relative point so the voting public would be more lenient when a new bill came out that didn't restrict so much, but still had restrictions. This game is a slow moving one, and with our backing up files with <a rel='help' href="http://www.onlinestorage.org/why-is-online-storage-becoming-so-popular/">online storage</a> companies, the government can now be much more invasive with how we use our files.