Arizonans Speak Out Against ALEC

As state legislators and corporate lobbyists from around the country convened in Scottsdale Wednesday for an American Legislative Exchange Council (ALEC) meeting, Arizona residents impacted by ALEC policies raised their voices in opposition to the organization's corporate agenda.

Local leaders spoke out at a press conference at the Arizona State Capitol while protesters marched outside the resort hosting the ALEC "States and Nation Policy Summit," where Governor Jan Brewer was scheduled to speak. The event came one day after People for the American Way released a report detailing the extent of ALEC's influence on Arizona policy.

"ALEC is designed to enrich the richest corporations in this country at the expense of Arizonans," said John Laredo, former Arizona House Minority leader, at the press conference. Laredo explained how legislators at the ALEC conference would be "taking advantage of all the perks every lobbyist can throw at them," building relationships that allow corporations to advance ALEC 'model legislation' that benefits their bottom line.

Todd Landfried of the group Arizona Employers for Immigration Reform said that "ALEC does not represent all of corporate America," noting the negative impact that Arizona's anti-immigrant SB1070 law had on the state economy and many small businesses. SB1070 is a carbon-copy version of the ALEC "No Sanctuary Cities for Illegal Immigrants Act," and was approved by an ALEC task force that included the Corrections Corporation of America and American Bail Coalition, both of which stood to benefit from immigrant detention.

Corrections Corporation of America (CCA) and other private prison operators have close ties to Arizona political leadership and employ the Arizona-based firm Public Policy Partners for lobbying on the federal level. Caroline Isaacs of the American Friends Service Committee said that private prisons are a "failed experiment" that have been "more expensive, less safe, and not accountable to taxpayers." Isaacs told the crowd that the for-profit prison industry has warped political incentives and flexes its political muscle to advance "the criminalization of more behavior to keep prison beds full." She noted that ALEC was also responsible for the early 1990s 'truth in sentencing' and 'three strikes-you're-out' bills that have made prison populations explode over the past twenty years.

Middle school teacher Erin Kirchoff criticized ALEC-inspired education policy in Arizona that "turn our public schools into a profit-making endeavor." She highlighted ALEC bills that give parents taxpayer-funded vouchers for private schools and implement online 'virtual' education that would leave students isolated from teachers and peers. "The parents and taxpayers in my neighborhood have not been clamoring for these changes," she said, noting a recent study showing that 91% of Arizonans say K-12 education is their number one priority. Kirchoff said Arizona legislators are instead "supporting ideas generated by corporate lobbyists in D.C." rather than their own constituents. 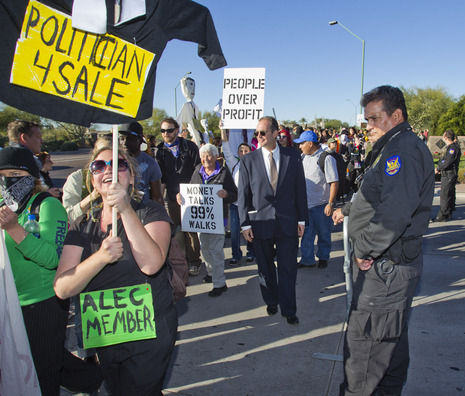 A few miles away from the press conference, Occupy Phoenix and others marched on the Westin Kierland Resort & Spa, the site of the ALEC summit. Protesters were met with a heavy police presence. At least 100 officers were stationed at each entrance to the hotel, police cars lined the streets, and two helicopters were spotted circling overhead. Police pepper sprayed activists earlier in the day and at least seven protesters were arrested. Occupy protests in Denver, Oakland, and elsewhere also announced marches in solidarity with Occupy Phoenix and against ALEC.

On Tuesday evening, local and national organizations held a public forum on ALEC's influence at the South Mountain Community College. Over 200 community residents attended the event.

Lisa Graves of the Center for Media and Democracy kicked off the discussion. "What ALEC's privatization efforts do is take your tax dollars to create profits for private firms, which then use those profits to underwrite ALEC and lobby politicians for more privatization. They then have the audacity to talk about how they are some of the biggest employers in your state when, in fact, you the taxpayer are the source of that revenue."

Arizona AFL-CIO treasurer Rebekah Friend talked about the consequences of privatization for families. "When public services are privatized people lose their jobs, their health care, their retirement, and the benefits that keep their families secure."

Attendees say Joe Thomas of the Arizona Education Association had the best line of the night. "People say politicians are out of touch, but don't ask who they are in touch with. Now we know, and it is ALEC."

The ALEC summit runs through December 2.