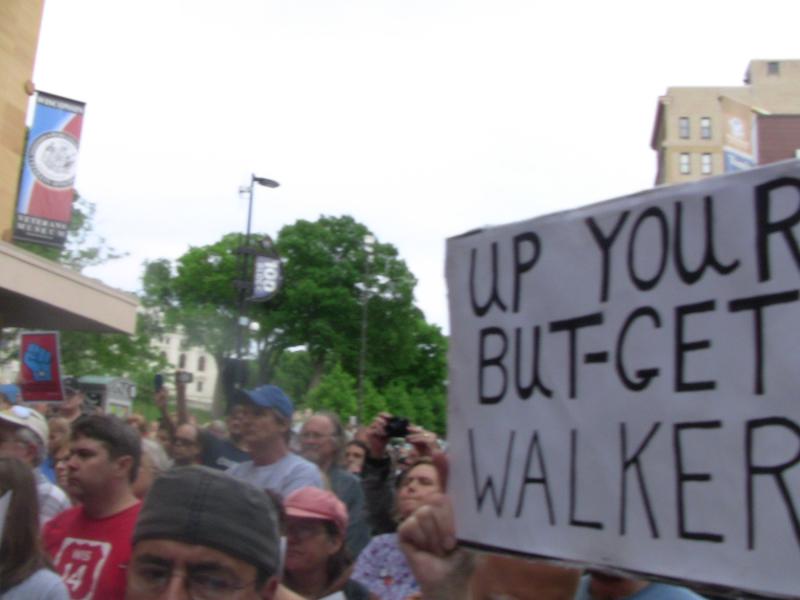 Tuesday's legislative activity promises to rouse the residents of Walkerville, the new tent city surrounding the capitol. State Capitol Police Chief Charles Tubbs said authorities are planning for increased crowds, and the Wisconsin Education Association Council has urged its 98,000 members to descend on Madison's Capitol Square, to protest a budget that guts public schools, strips workers of their rights and erodes our state's quality of life."

Tomorrow's proceedings will begin with an 11 A.M. "extraordinary session" as the Assembly takes up the budget. Called for by Republican legislative leaders, the session will feature all the hallmarks of Walkervillian democracy: limited debate, limited consideration of new additions to the budget, and arcane political maneuvering. If the Assembly passes the budget in extraordinary session, Republicans will have the power to immediately send it to the Senate.

All eyes will be on the Assembly tomorrow see if further tricks are planned. Rumors late last night indicate that the Assembly may attempt to insert a redistricting map into the budget, a rare and highly undemocratic move for one of Wisconsin's most important undertakings.

Other provisions rolled to the budget by the Joint Finance Committee in recent days without public hearings or much discussion have rankled legislators, business groups and advocacy groups. Proposals include: handicapping small beer breweries in favor of Miller/Coors, extending the cap on the number of hours a child may work in a week, allowing bounty hunters to operate in the state for the first time since 1979, slashing $1 billion for schools while at the same time extending corporate tax breaks in excess of $386 million.

In a statement released to the press, Rep. Kelda Roys attacked the "insidious policy and fiscal changes that have largely been obscured from the public."

The Racine school district and the Green Bay school district were surprised and angered by a last minute decision to bring voucher schools to their districts. Under the system public monies are used to send children to private schools.

A proposed tax break for premium brands of chewing tobacco and Snus (a moist tobacco placed under the lip) has also garnered the attention of local activists and concerned parents. Under the new tax guidelines, prices for kid-friendly brands like Skol, Copenhagen, and Skol Snus made by Altria (formerly Phillip Morris), would drop. The smokeless products target kids with lollipop flavors like cherry, apple, and grape.

The Joint Finance Committee recently approved a bill to allow Wisconsin residents to legally carry a concealed gun in public. Even though protesters are being wanded every time they go into the Capitol, soon they will have the legal right to carry concealed weapons into the building.

In light of the intensity surrounding tomorrow's legislative agenda, protestors have been told to expect strict security measures. Two additional points of entry to the Capitol have been added to accommodate additional protesters, but sleeping bags and noisemakers will be barred, said police chief Tubbs, and the hanging or taping of signs inside the Capitol is forbidden.

A rally against the budget and other proposals is set to begin at 11A.M., culminating at 5:30 on the corner of State Street. AFSCME, WEAC, AFL-CIO, We Are Wisconsin, and SEIU have all dispatched messages inviting their members to peacefully protest.