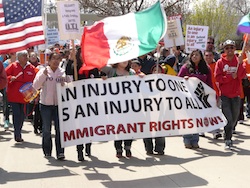 May Day, or May 1st, became International Workers' Day in 1886, when it was the beginning of a multi-day general strike in Chicago in which workers demanded an eight-hour work day. On May 4, 1886, the strike ended in what became known as the Haymarket Affair.

Yvonne Geerts of the Immigrant Workers Union said, "In 2006, immigrant workers reclaimed May Day as a clear acknowledgment that immigrants are the first workers who recognize the importance and the practicality of unity with all workers. Today, thousands of working families are victims of the policies of Wisconsin Governor Scott Walker, via service cuts to important programs like BadgerCare, FoodShare, Education, and so much more. Solidarity, today, is more relevant than ever." 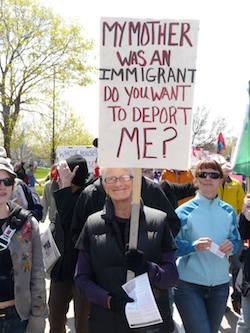 On May Day this year, protesters demand "a just taxation system where corporations and the wealthy pay their fair share, living wage jobs, the right to collectively organize and bargain, quality affordable public education, in-state tuition for undocumented students, quality and affordable healthcare for all, protection of our environment, access to healthy food and quality housing, a secure retirement and no Arizona-style anti-immigrant laws," according to the Mayday in Madison website.

Of particular concern to the protesters is legislation first proposed in November, 2010 by Rep. Don Pridemore (R-Hartford) that would require "people suspected of crimes in Wisconsin ... to prove they were legally in the United States or be turned over to federal immigration authorities," according to a November 10, 2010 story in the Journal Sentinel. 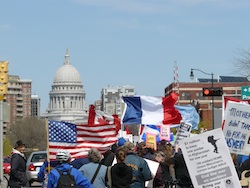 Speakers addressed the crowd at Brittingham Park before today's march. Several referenced the Haymarket affair of 125 years ago, pointing out that many of the Chicago workers involved in the strike were immigrants from Germany, Poland, Czechoslovakia and Hungary. Ben Manski, Executive Director of the Liberty Tree Foundation, reminded the crowd that today is also Yom HaShoah, or Holocaust Remembrance Day, and that branding part of the population as "illegal" had its precedent in Germany at that time. He led a chant of "Never forgive, never forget, always resist the Fascist threat."

Manski also called for a moment of silence to honor activist Ben Masel, who passed away yesterday. Later, TJ Mertz of Progressive Dane asked the crowd to honor him by making noise instead.

The march itself was led by the bagpipers of the Madison Firefighters' Union and a student group carrying a banner that read "An Injury to One is an Injury to All."