Vinegar or Koch? The Wisconsin Way

The man featured to carry this script forward? Wisconsin Governor Scott Walker, who has stirred a revolt in his state by attempting to balance the budget with steep cuts to education and healthcare and by busting unions.

Walker stuck to the script, arguing in his testimony that to avoid massive layoffs and massive property tax increases, he was forced to go after collective bargaining rights: "In Wisconsin, we are going to pursue a truly progressive option. We are going to give local governments the 'tools' they need to balance their budgets for many years to come." Among the tools are new requirements for the annual certification of union contracts and provisions that make it harder for unions to collect union dues.

Rep. Dennis Kucinich (D-Ohio) asked Walker the key question: What do the union-busting provisions have to do with balancing the budget? "Annual votes so unions can continue representing their own members. How much money does this save your state budget?", Kucinich demanded. "It doesn't save any," admitted Walker.

In fact, it is likely to cost the state agency charged with overseeing the elections a pretty penny. Kucinich entered into the record a Wisconsin Legislative Fiscal Bureau memo noting that the items were not fiscal. 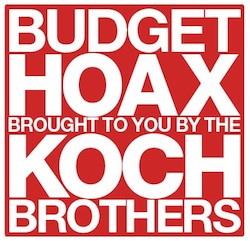 Rep. Quigley (D-Illinois) said that many governors "are taking advantage of an economic downturn to achieve long-standing ideological goals." Rep. Christopher Murphy (D-Connecticut) pointed to the obvious political agenda behind the bill, quoting comments made by Wisconsin State Senator Scott Fitzgerald to Fox News: "If we win this battle, and the money is not there under the auspices of the unions, certainly what you're going to find is President Obama is going to have a much difficult, much more difficult time getting elected and winning the state of Wisconsin."

The situation was summed up best by Mahlon Michaels, a Wisconsin firefighter who attended the hearing. "The governor was asked a number of times about what restricting the rights of workers had to do with the deficit, and it is clear that this is not about that. This is about Governor Walker going after the rights of employees. Even though the firefighters are exempt from his provisions, we are here to stand with the workers of Wisconsin."

Democratic Governor Peter Shumlin was a striking foil to Walker. He gave Walker a quart of Vermont maple syrup, and in a reasoned, measured fashion went straight to the heart of the real challenges facing states.

"When I look at the problem of balancing our budget, I don't start with collective bargaining. I look at rising costs. What is our biggest cost in Vermont? Healthcare is the biggest cost in our budget." If skyrocketing health care costs are not controlled says Shumlin, "it will take 2,500 out of the pocket of every Vermonter." Vermont is well on its way to implementing a single-payer health care system in order to bring down health care costs. "The second driver of costs for our state is corrections. Our corrections budget has almost doubled," Shumlin added.

In reducing costs, Shumlin thinks governors can get "more with maple syrup than vinegar." He listed enormous concessions Vermont state workers agreed to including paycuts, higher retirement contributions and higher health care contribution that resulted in enormous savings. The laundry list made Shumlin's point crystal clear: "You can do all this without taking away collective bargaining."

While their name was rarely mentioned in the room, underlying the debate was the corporate interests who are beneficiaries of a war on workers. This included Wall Street barons, who would rather see workers blamed for the state of the economy than have attention turn back to their corporate bonuses. And the Koch Brothers, who funded numerous parties testifying today and have long promoted a race to the bottom for workers and wages.

Only one representative had the courage tackle Wall Street head on. Rep. Elijah Cumnings (D-Maryland) said, "This recession was not caused by working Americans. Firefighters, teachers and nurses were not responsible for the reckless actions on Wall Street … It is shameful to play politics with middleclass families –- we should be helping these workers, not attacking them they are the engine of our economy."

Rep. Jackie Speier (D-California) also pointed to the agenda of corporate interests. She read from an Americans for Prosperity site, "Stand with Walker," that attacked the "lavish" benefits of state workers and pointed out that the starting salary for Wisconsin teachers was $25,000 -- 49th in the nation. She asked Walker how much money he had received from the Koch Brothers. When Walker demurred -- "I got contributions from 50,000 people" -- Speier asked if he returned their phone calls, too, and reminded him that Koch Industries contributed $43,000.

Looking around the room, Speier would have seen a number of her colleagues who have taken Koch money as well, starting with the $12,500 in Koch funding that has gone to Issa specifically, along with $5,000 to his PAC. According to People for the American Way, the Koch brothers have contributed $107,000 to 13 Republican members of the House Oversight and Government Reform Committee.

"The Chairman has turned this committee into an echo chamber for the pro-corporate, anti-worker agenda of the billionaire Koch brothers and their allies. The extent of their influence over the witnesses and the committee members themselves all but guarantees that the GOP will continue to justify putting government at the service of corporate interests while demanding that middle class Americans make difficult sacrifices," said Marge Baker of People For the American Way.

Sitting in the audience were dozens of protestors wearing pins: "Budget Hoax, Brought to You by Koch." And one or two snuck in signs that said "Governor Walker Get off the Koch," demonstrating that how ever far he traveled Walker's critics were not going away.

This is a reminder of the cold-blooded greed that permeates the stock markets and the corporate board rooms. They are rewarded by politicians for crimes against the people/workers/voters. We must not forget that most politicians are/were business executives and that they are looking out for their own futures. We have to remember that so many politicians leave office and become lobbyists or high officials in huge corporations. Of course they are going to be tempted to get in bed with the likes of the Koch brothers. Until we first dissolve the lobbying industry, then regulate campaign finance and other financial contributions to government (in fact, we should eliminate financial contributions to government altogether), install policies regulating the bonuses of corporate executives, and finally, install REAL penalties for corporate crime, this will continue to haunt us. Until we do these things, corporations will continue to abuse our government, abuse our financial institutions and abuse us.
It is a mistake to let Walker get away with saying he only got $43,000 from the Kochs. Through their many organizations including a PAC for Republican governors, Walker got more than $43,000 from the Koch brothers.
It's good that we are getting reports on the Koch Brothers influence of the political system but the Koch Brothers influence is rather recent. However Haim Saban has been corrupting the political system with more effectiveness than the Koch Brothers. Saban has made it clear that his only interest is Israel and to that end he has contributed mostly to the Democratic Party at levels that far exceeds the Koch Brother and even many corporations. Saban has also been a major contributors to the venerable Liberal think tank, the Brookings Institute which named an entire wing after him. Why no scrutiny of Saban? His contributions and influence especially through Brookings has lead to the election of two of the last three presidents. It's time we take a close look that Zionism has on U.S. politics.