Court Race Throws a Spanner in the Works of Wisconsin Wingnuts

While Wisconsin Congressman Paul Ryan prepares to shut down the federal government to prove that government is bad, analysts say the radical agenda of Wisconsin Governor Scott Walker suffered a major set back today as his good friend incumbent Justice David Prosser was defeated for Wisconsin Supreme Court. The AP unofficial vote count, with 100 percent of the precincts reporting, puts challenger Joanne Kloppenburg ahead by slightly more than 200. A recount is doubtless on the way. 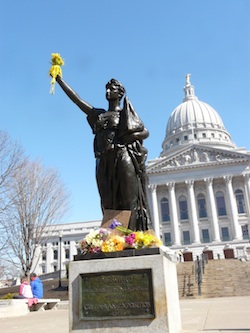 In a state that has never unseated a conservative Supreme Court justice, people power fueled a concentrated effort to deny the Imperial Walker one branch of government. Walker's opponents hope a Kloppenburg victory will swing the Supreme Court in a more independent direction and set the stage for the court to strike down Walker's controversial collective bargaining law. While the fate of the law is uncertain, Kloppenburg's three week sprint from dead-in-the-water to victor may give Walker, Ryan and other Wisconsin politicians pause as they rush to radically reshape government to benefit the privatizers and profiteers.

While it may seem odd to many Americans, Wisconsinites like to elect their judges. Although an elected judiciary has its problems (namely, unseemly high-dollar elections), the ballot box sometimes hands citizens a rare opportunity to un-elect judges -- and that is what many Wisconsinites decided to do today. Prosser, a former Republican Assembly Speaker, stumbled when his campaign embraced Walker's election.

The Kloppenburg victory is stunning. Six weeks ago, sitting Judge David Prosser was a shoo-in and the challenge by Assistant Attorney General Kloppenburg was a snooze fest. But something happened on the way to the high court. A governor, who was elected to create jobs, took office and quickly moved to disenfranchise voters and kneecap unions so they could no longer be a viable force in state elections. The raw power grab sparked a spontaneous uprising, the likes of which this state has never seen, and the Supreme Court race was the next vehicle for people to have their voices heard.

The whole country took notice when firefighters, teachers and cops stood with working families across Wisconsin to say 'no' to Walker's radical plans to bust unions, cut $1 billion from schools and privatize the university system.

When his "budget repair bill" was passed March 9th, many national observers thought the fight was over. With large margins in both houses, Walker's stranglehold on government seemed invincible.

But irate Wisconsinites fought back on multiple fronts, filing lawsuits over the way in which Senate leaders rammed the bill through with less than the requisite notice required under the state open meetings law, blocking the bill's implementation. They filed recall petitions against eight Wisconsin senators and this week delivered the requisite signatures for two of those recalls well ahead of schedule. They turned their attention to the heretofor unnoticed race for Wisconsin Supreme Court. Within days, handmade signs for Joanne Kloppenburg popped up across the state. Many voters understood that to win any of the battles ahead over worker rights, over the recalls, over redistricting and more, a more balanced judiciary was needed.

Kloppenburg went from being a long-shot to victory in a three-week sprint marked by huge independent expenditures on both sides. The anticipated recount will keep the juices flowing and will fuel the remaining recall fights.

While some voters believe the court will act as a check and balance on the madness at the state level, they are concerned that Paul Ryan continues to run amok at the federal level -- threatening a complete government shut down. At the same time that Walker was working to obliterate unions and privatize public schools, Ryan, Chair of the House Budget Committee, decided to go after Grandma with the complete privatization of Medicare. His radical budget bill, unveiled this week, slashes trillions of dollars from America's social safety net and throws the elderly into the private insurance market with a "voucher" in their pocket.

Less interested in balancing the budget than redistributing wealth, his budget plan would funnel billions into the pockets of big insurance firms while also giving a ten percent tax break to corporations and the very richest Americans.

What is really going on here? Naomi Klein warned in her groundbreaking book "Shock Doctrine" that the right-wing excels at creating crises, real and imagined, to viciously advance their pro-corporate anti-government agenda. She credits economist Milton Friedman who observed that "only a crisis—actual or perceived—produces real changes. When the crisis occurs, the actions that are taken depend on the ideas that are lying around. That, I believe, is our basic function: to develop alternatives to existing policies to keep them alive and available until the politically impossible becomes politically inevitable."

UW Professor Joel Rogers wrote recently: "As explained by Grover Norquist and Karl Rove, this project aims at national repeal of most of democratic achievements of the 20th century, a return to business domination of public life not seen since the Gilded Age and McKinley."

The Wall Street financial crisis caused by years of deregulation and lack of government oversight cost Americans eight million jobs, tanking federal and state tax receipts and creating budget shortfalls. Ryan and Walker are moving to take advantage this real jobs crisis to cook up a fake deficit crisis to advance a radical agenda that is hostile to the very idea of government – the idea that sometimes services are best provided and things are best accomplished collectively, for the public good, and not for corporate profit.

Today, many voters believe that this agenda was checked in Wisconsin. While another recount battle looms, voters of Wisconsin are pledging that they will not allow this victory to be stolen.

Amazing how you try to tie Ryan & Walker together. You people are completely delusional!
The article says (1) that Walker and Ryan are both Wisconsin politicians, and (2) the same time Walker is doing one thing, Ryan is doing another. That's the extent to which the article ties them together. You wouldn't have to be delusional to think you're getting screwed by both of them, though, whether apart or in collusion.
Let's see here.... Two far-right wingers engaged in privatizing every social policy or advocacy group they can get their hands on, you seem to think is unfair to say as much. Yet at the very same time you think it's unfair to unite them in a common cause, you conflate everyone else ("you people") as being delusional for merely stating the obvious. Bizarre. The only way to make sense of it would be to assume you're projecting your own cognitive deficiencies onto others. Remember..... "Conservatism is not the doctrine of the intellectual elite or of the more intelligent segments of the population, but the reverse. By every measure available to us, conservative beliefs are found most frequently among the uniformed, the poorly educated, and the less intelligent". McClosky, H. Conservatism and Personality. American Political Science Review, 52, 27-45
http://www.rawstory.com/rs/2011/04/07/wisconsin-court-race-jolted-by-uncounted-ballot-find/ Many think such a large find -- more than 7,000 appearing so suddenly -- strongly suggests monkey business. It's gonna take a while to sort out.
Hmmm... [Excerpt from article]"She [county clerk] said at a news conference that she had failed to properly save a spreadsheet showing one town's voting results." Elsewhere it states they were ALL for Prosser, a Republican judge with ties to Walker and the Koch's imperial "court". Are we to suppose then that every single person voted for Prosser in that town? Or is there a list of Kloppenberg supprters still unaccounted for? Enquiring minds.....;-)
http://www.jsonline.com/blogs/news/119476659.html