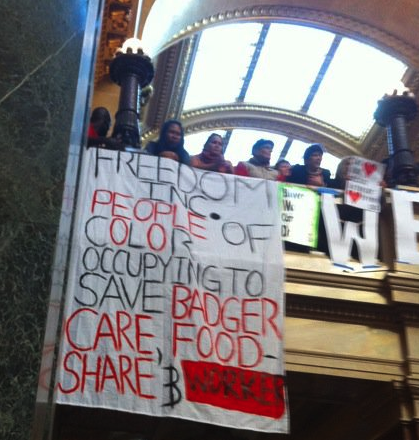 "Let’s be clear: Gov. Walker has been after all of us from day one — and not just on the union issue. The Republican legislature's drafts of Arizona-style anti-immigrant bills threatens immigrants and would make it more likely than ever that people of color would face discrimination while driving. Unemployed workers took it on the chin when Gov. Walker vetoed high rail jobs. And Gov. Walker's threat to cut BadgerCare, FoodShare, and other life-saving services for millions of Wisconsinites imperils the health and welfare of our residents."

"Gov. Walker's mistake is the orchestrated political attack on all of us. Such an attack requires an orchestrated response. Labor unions must work to unite their struggle for their members with the struggle of the unemployed, threatened communities of color and abandoned low-income communities in Wisconsin."

I spoke with Sangita Nayak, communications director for Freedom, Inc., just now. She informed me that the organization has succeeded in mobilizing scores of southeast Asian and African American youth to participate in the protests. And she expressed frustration that, as of yet, this solidarity has not been noticed. As one African American MATC student told Sarah Manski yesterday, "protesting while Black" is often a risky business.

For both students and for youth of color, the risks they have taken this past week may pay off next week, when Governor Walker begins to release the details of his next full biennial budget proposal. Will public sector unions, already mobilized and in the fight of their lives, come to the aid of students facing 26% tuition hikes? Or unemployed youth of color facing drastic cuts to life-sustaining services? After this week, more of them may.

And that's what the organizers at Freedom, Inc. are counting on -- the broadening of the uprising to unite all the poor and working people of Wisconsin. As Nayak put it to me on the phone just now, "there are more young people, youth activists, coming out here every day, and we need to keep this movement growing."

Special Op-Ed from Ben Manski of the Liberty Tree Foundation

REAGAN TO BUSH=DECLINE OF MIDDLE CLASS=LOST EMPIRE 1945-1980 were 35 years of equality and creation of America's Great Middle Class Reagan began the attack on our government. Cut government—cut taxes for the rich—build killing machines-talk Rambolese. Reagan increased size of government by 80%. Reagan increased Debt by 170% Reagan decreased Carter record job creation by 24%. Reagan set a record for members of an administration charged with crimes. His total was more than grand total of all since 1900. Reagan got us involved in five international conflicts Reagan began redistribution of Income-Wealth to top 1%. In 1980 the top 1% owned 20% all Financial Wealth In 989 they owned 36%. An 80% increase. In 1980 we had 10 Billionaires. In 1989 we had 51, GW Bush continued the Redistribution in a big way. In 2008-1% owned 43% of Total Financial Wealth In 2008-1% got 24% of Total Income-Wealth 2001-2007-1% got 66% of Total Income Growth From 1980 to 2009 three so-called Conservative Presidents with 18 years of a Conservative Senate and 12 years of a Conservative House and six years Total Control of our Government DID THIS Increased Carter 600B Budget to 3500 (less wjc itsy bitsy) Increased Carter 907 by 9000 Increased Carter itsy bitsy Deficit to a record 1400. Involved America in 8 international conflicts in which millions of innocents died JOBS—created an average of 99,000 per month. Carter + Clinton record 222.000 Gave us Great Recession from Housing ,Wall Street Greed and Two very dumb wars. Great Recession a Great Depression had there been no Democratic Safety Nets. Created the Casino Derivative Of America by permitting unrestricted Gambling. Richest of Rich flocked into Gambling Casino. Left investment in corporations that created jobs for new get rich quick scheme. Proof-Dow hit hi of 11,720 in 2000 and went to 7000. S&P 500 major corporations declined in value 7800 Banks and 80% of all bank deposits owned by just 20 Too Big Too Fail. 120,000,000 workers own 7% of Total Financial Wealth. Banana anyone? Today we have an Aristocratic Corpocracy. Like it or not it is Truth. Comments or corrections welcome at cswinney2@triad.rr.com olduglymeanhonest mad mad mad