When fake Koch says "We'll back you any way we can. But what we were thinking about the crowd was, uh, was planting some troublemakers." Walker says: "We thought about that," but he rejected the idea in case it backfired, but not in the way one might think. He didn't want to create a ruckus that would "scare the public into thinking maybe the governor has to settle to avoid all these problems."

Madison Police Chief Noble Wray said Thursday that he found the comments "very unsettling and troubling." "I would like to hear more of an explanation from Governor Walker as to what exactly was being considered, and to what degree it was discussed by his cabinet members. I find it very unsettling and troubling that anyone would consider creating safety risks for our citizens and law enforcement officers," the chief said.

Late Thursday night the Governor amplified the comments in an interview with Wisconsinite and FOX talk-show host Greta Van Susteren. Van Susteren pushed Walker on the comments about planting troublemakers in the crowd. Van Susteren: "You said you 'thought about it.'" Walker: "We did. We did. We had people contact us, I even had lawmakers and others suggest riling things up." (Watch the video here.) 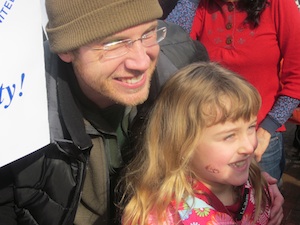 In an interview with CMD, these later comments prompted Madison attorney Lester Pines to call for an investigation. "In my opinion these comments need to be investigated as a very serious matter. The governor of the state has said more than once that he considered sending people into a peaceful demonstration to disrupt it -- that is the only reasonable interpretation of what he said. That someone would suggest violence or disrupting peoples' right to peacefully assemble is shocking. The question is, did they take any steps towards implementing this plan? Did they make some calls, hold a meeting with cabinet member or legislators to discuss it? If they did that it may be a conspiracy to commit violence under state law -- you don't have to engage in it, you just have to plan it to qualify -- and it may be a conspiracy to deny citizens of their civil rights under federal law. It deserves to be investigated further."

On Friday, Madison Mayor David Cieslewicz seems to have reached similar conclusions and sent the Mayor a letter asking a series of pointed questions:

Most troubling to some observers is the fact that the Governor still seems to think it was not such a bad idea. It was not rejected for ethical, legal or common-sense reasons, the person or persons were not kicked out of the room, disciplined or fired. Rather, the notion was rejected for political reasons -- over concerns the scheme might backfire.

The only unpredictable aspect of the 'prank call' was whether Walker's staff would filter out the incoming calls. Walker himself has been only angstroms away from bragging about being scum (a positive character attribute in the view of many conservative voters).