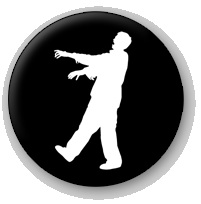 My recollection is a bit hazy. How does one kill a zombie exactly? Do you stake it? Cut off its head? Nationalize it? Perhaps it's time to ask the experts at Bloomberg News.

Lost in the haze of the hoopla surrounding the insurance reform bill was some big news on the financial reform front. On March 19, Bloomberg won its lawsuit against the Federal Reserve for information that could expose which "too big to fail" banks in the United States are walking zombies and which banks were merely rotting.

Bloomberg, which has done some of the best reporting on the financial crisis, is also leading the charge on the fight for transparency at the Federal Reserve and in the financial sector. While many policymakers and reporters were focusing their attention on the $700 billion Troubled Asset Relief Program (TARP) bailout bill passed by Congress, Bloomberg was one of the first to notice that the TARP program was small change compared to the estimated $2-3 trillion flowing out the back door of the Federal Reserve to prop up the financial system in the early months of the crisis.

Way back in November 2008, Bloomberg filed a Freedom of Information Act request asking the Fed what institutions were receiving the money, how much, and what collateral was being posted for these loans. Their basic argument: when trillions in taxpayer money is being loaned out to shaky institutions, don't the taxpayers deserve to know their chances of being paid back?

Not according to the Fed. The Fed declined to respond, forcing Bloomberg to sue in Federal Court. In August of 2009, Bloomberg won the suit. With the backing of the big banks, the Fed appealed, and this month, Bloomberg won again. A three judge appellate panel dismissed the Fed's arguments that the information was to protect "confidential business information" and told the Fed that the public deserved answers.

The Fed is the only institution in the United States that can print money. It can drag this case out as long as it wants, but isn't it a bid odd that taxpayer dollars are being used to keep information from the taxpayers?

After an unexpectedly rocky confirmation battle, Ben Bernanke kicked off his new term as Fed Chair in February with pledges of openness and transparency. "It is essential that the public have the information it needs to understand and be assured of the integrity of all our operations, including all aspects of our balance sheet and our financial controls," said Bernanke. President Obama also pledged a new era of transparency when he entered office. What is going on here?

One theory is that Fed is hiding the secret assistance it provided to the financial sector, because it would expose how many Wall Street institutions are truly walking zombies, kept alive by accounting tricks like deferred-tax assets, "a fancy term for pent-up losses that the bank hopes to use later to cut its tax bills," according to Bloomberg's Jonathan Wiel. If this is the case, it raises doubts about the wisdom of Congress' only plan to take care of the "too big to fail" problem by trusting regulators to "resolve" failing banks. If there is no will to resolve them now, why should we think regulators will resolve them in the future?

In either case, the public deserves answers. "This money does not belong to the Federal Reserve," Senator Bernie Sanders. "It belongs to the American people, and the American people have a right to know where more than $2 trillion of their money has gone."

The President and the Fed Chairman must live up to their pledges of transparency. They can start by abandoning this lawsuit and opening the doors on the Secrets of the Temple.

Great article! Regarding the Fed's reason for extreme secrecy: Another theory that is gaining steam is that the Fed's decisions of whose assets to buy and at what inflated price were dictated by various politicians, and the Fed wants to conceal from the press and the public the extent to which it is a political tool.