Update: Congress vs. the President

A few weeks ago, we first posted on the subject of presidential signing statements. At that time, we issued a challenge to all the citizen journalists out there to help us pin down the positions of the members of the Senate Judiciary Committee on Sen. Arlen Specter's (R-Pa.) Presidential Signing Statements Act, where the bill currently resides. The bill would grant Congress the right to file suit in order to determine the constitutionality of signing statements.

With your help, and some research of our own, we've been able to pin down the positions of half the members of the committee (nine of eighteen). Special thanks to one of Sen. Mike DeWine's Ohio constituents, who sent in an email he got from the senator on the subject. We've put calls into the offices of the other nine, but for whatever reason they are unwilling or unable to come out publicly on the bill. The current count: five in support, two opposed, and two officially uncommitted. For the full breakdown, see the handy chart on our presidential signing statements page.

Signing statements have not always been a hotly debated issue between Congress and the president. In fact, for the first seventy years following the ratification of the Unites States Constitution, no president used a statement to express his intent not to comply with a law he signed. Over time, however, this gradually changed. The past twenty years have seen presidents frequently use signing statements as a tool to influence the way legislation is carried out by the executive branch. President George W. Bush has easily surpassed each of his predecessors, having challenged over 800 congressional provisions in his statements since taking office in 2001. This chart details the historical progression of signing statements over time. 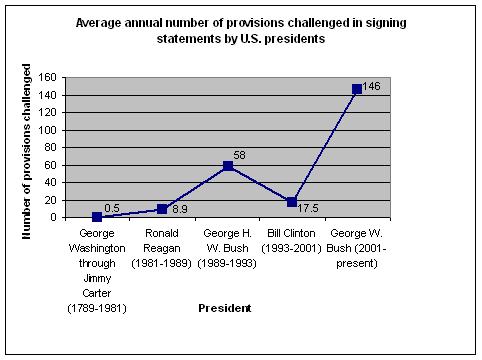 For a more detailed historical analysis of signing statements, check out Congresspedia's new page on the topic.