Saturday's rallies were the largest yet! News reports have put the number of Walker protesters at the Capitol today at 70-80,000 compared to 3-5,000 for Tea Party participants. 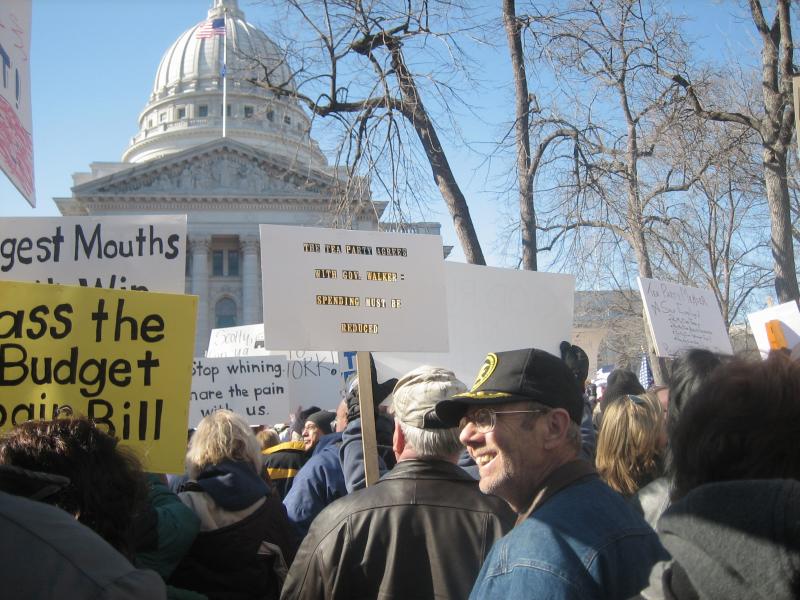 In what appears to be the largest day of protests yet, opponents of the budget repair bill filled the capitol square and paraded through packed streets while Walker supporters, Tea Party members, and conservative activists congregated in the state capitol's East spur. Approaching the spur at the height of the noon rally (organized by the Koch brothers' Americans for Prosperity), a deafening mix of competing chants ("Kill the bill!" "Pass the bill!" "Si se puede!" "What's disgusting? Union busting!") made it difficult to hear the speakers.

10:30 p.m. - Mary Bottari: WI Congressional Rep. Paul Ryan who was far from the protests in Washington this week, said disapprovingly that WI was beginning to look a lot like Cairo. Today, one person responded with a sign in 20 degree weather: "I thought Cairo would be warmer."

A Milwaukee Journal Sentinel reporter gives a dramatic account of what happened on the Assembly floor today:

The Assembly teetered on the brink of chaos Friday evening but then adjourned peacefully after Republicans rescinded a vote on Gov. Scott Walker's budget-repair bill that the GOP lawmakers took without Democrats present.

In the Wisconsin Assembly on Friday, Republican leaders had called lawmakers to the floor at 5 p.m. to take up Walker's bill to fix a budget shortfall by cutting public worker benefits and bargaining rights. But they began business just before that hour, when Democrats were not yet on the floor.

Wisconsin's embattled Governor Scott Walker took large donations from Koch Industries in the run-up to the 2010 election that swept him into office. OpenSecrets.org reports that Koch Industries donated a total of $43,000 in two separate contributions -- $15,000 on July 8, 2010 and another $28,000 on September 27, 2010 -- to the Friends of Scott Walker Political Action Committee (PAC), to help get Walker elected governor.

Despite Governor Scott Walker's exemption of unionized public safety workers -- firefighters, police officers and the like -- from his union-busting budget "repair" bill, the International Association of Fire Fighters (IAFF) wants to make one factor clear: Wisconsin firefighters are on the side of labor rights.

Wisconsin Governor Scott Walker alleges that dismantling public sector collective bargaining rights is made necessary by a $3.6 billion deficit in the next budget, and a $137 million shortfall this year. Setting aside the fact that the ability to negotiate shifts, seniority, benefits and conditions of employment would have a negligible impact on the deficit, and looking beyond Walker's deceptive claim that the alternative to union-busting is to kick 200,000 children off Medicaid (called "false" by Politifact), how deep is the state's economic crisis? 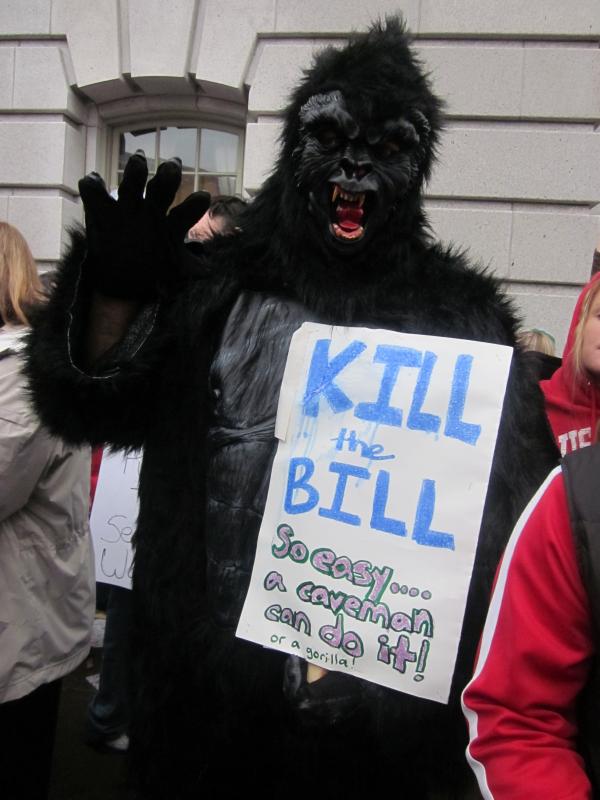 Mary Bottari: Outside the capitol, I bumped into UW Professor (Law, Political Science, Sociology, Public Affairs) Joel Rogers and asked him to explain the budget number to me. The national media can't seem to decide if Wisconsin has a budget deficit or not, or whether $30 million in concessions being demanded from workers is significant or not. Rogers explained that the $3.5 billion shortfall projected over the next biennium is about half what the one projected last time, which Wisconsin survived, and that $30 million was both trivial and dwarfed by new concessions unions had already offered to make. Says Rogers, "you just can't make sense of this as a deficit reduction strategy. It's a political strategy. Destroy public sector unions and you destroy the campaign organization of your opposition, Democrats. Of course he won't ever just say this." Rogers thinks the budget repair bill is "in three words: deceptive, dishonest, destructive. Deceptive because its not what people elected him to do. He's got no mandate to take away worker rights. Dishonest because unions are really not the source of our budget problems. A lousy national economy is, and unions are anxious to work with him in surviving in it. They're really not the problem, but can be part of the solution. And it's destructive because their help is needed. Nothing is gain by blowing up a 50 year tradition of public sector collective bargaining that was born in Wisconsin and gives a lot of people a great deal of civic pride."