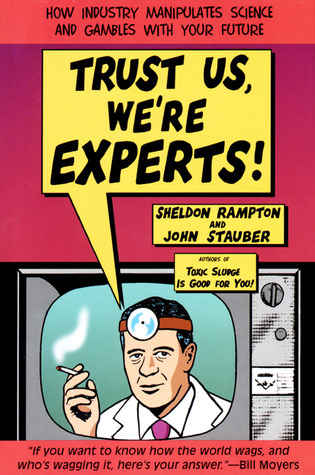 How Industry Manipulates Science and Gambles with Your Future

We count on the experts. We count on them to tell us who to vote for, what to eat, how to raise our children. We watch them on TV, listen to them on the radio, read their opinions in magazine and newspaper articles and letters to the editor. We trust them to tell us what to think, because there's too much information out there and not enough hours in a day to sort it all out.

We should stop trusting them right this second.

"If you want to know how the world wags, and who's wagging it, here's your answer. Read, get mad, roll up your sleeves, and fight back. Rampton and Stauber have issued a wake-up call we can't ignore."

In their new book, Trust Us, We're Experts: How Industry Manipulates Science and Gambles with Your Future, Sheldon Rampton and John Stauber offer a chilling exposé on the manufacturing of "independent experts." Public relations firms and corporations have seized upon a slick new way of getting you to buy what they have to sell: Let you hear it from a neutral "third party," like a professor or a pediatrician or a soccer mom or a watchdog group. The problem is, these third parties are usually anything but neutral. They have been handpicked, cultivated, and meticulously packaged to make you believe what they have to say--preferably in an "objective" format like a news show or a letter to the editor. And in some cases, they have been paid handsomely for their "opinions."

Rampton and Stauber reveal many more such examples of "perception management"--all of them orchestrated to make us buy or believe whatever the "independent expert" is pushing. They also explore the underlying assumptions about human psychology--e.g., "the public must be manipulated for its own good"--that make this kind of subliminal hard-sell possible.

Destined to be hated by P.R. firms and corporations everywhere, Trust Us, We're Experts is an eye-opening account of how these entities reshape our reality, manufacture our consent, get us to part with our money, even change our lives. A whole new spin on spin, it will forever alter the way we look at news, information, and the people who serve it up to us.

"If you want to know how the world wags, and who's wagging it, here's your answer. Read, get mad, roll up your sleeves, and fight back. Rampton and Stauber have issued a wake-up call we can't ignore."--Bill Moyers

"Trust Us, We're Experts is a brilliant piece of investigative journalism and a powerful vaccine against the stupifying effects of the corporate PR machine. Spread it around!"--Barbara Ehrenreich

"If you've ever wanted to see a TV spin doctor hog-tied and dragged through the streets, Rampton and Stauber do the next best thing. This book is modern muckraking of the best variety, skewering hype and showing us how to separate real experts from snake oil salesmen and hired corporate know-it-alls."--Jim Hightower

"Finally, a long-overdue expose of the shenanigans and subterfuge that lie behind the making of experts in America. Stauber and Rampton take us behind the scenes, inside corporate boardrooms, where marketing chiefs literally manufacture their own 'independent experts' to defend their products and practices. This groundbreaking book gives us a first look into the seamy side of corporate public relations, where academic experts of every stripe and kind are bought in various ways. An eye-opener."--Jeremy Rifkin

"Unlike many exposés, the book is a page-turner. Once you start, you will want to read it all. While your heart may sink, your passions will be aroused. It is like a sudden awareness that sweeps illusions away. This is not a casual jeremiad, but a careful, patiently researched deconstruction of corporate behavior and their so-called ethics."--Paul Hawken, author of Ecology of Commerce, Natural Capitalism

"Rampton and Stauber's book explodes the cult of expertise and shows how easily the media and their readers can be misled by public relations claims masquerading as science. This book makes the best case I know for complete disclosure of the financial conflicts of interest of scientists and the corporate influence on university research."--Sheldon Krimsky, Professor at Tufts University, author of: Hormonal Chaos: The Scientific and Social Origins of the Environmental Endocrine Hypothesis

"Trust Us brilliantly exposes the dirtiest public relations campaigns in America for what they are--cynical attempts to undermine our democracy so some creep can sell your kid more cigarrettes, push more Microsoft software on you or melt down the North Pole with global warming pollution."--John Passacantando, Executive Director, Greenpeace US

"This book is a must for everyone attempting to sift through the vast amount of information available in the media and on the net. It reveals how high-priced, international public relations corporations are hired to redefine facts, create confusion, and destroy reputations of accomplished scientists to protect their bottom line. The good news comes at the end of the book when the authors tell how to filter the news to remove the 'bottom-line bias' so exquisitely woven into advertisements and news items by special interests."--Theo Colborn, Senior Program Scientist, World Wildlife Fund, co-author of Our Stolen Future

"The United States today is in the midst of the Golden Age of Propaganda. Well-heeled private interests have learned how to manipulate journalism and public discourse on fundamental public health, environmental and political issues through the sophisticated use of public relations, bogus experts and junk science. In Trust Us, We're Experts Rampton and Stauber do the extraordinary and groundbreaking job of exposing these sleazy practices and rigorously holding them up to the light of day. Well organized and wonderfully written, Trust Us, We're Experts is a real page turner. It is a true masterpiece."--Robert W. McChesney author, Rich Media, Poor Democracy: Communication Politics in Dubious Times

"After reading this book I couldn't possibly listen to an expert witness again, even one under oath, without a lot of healthy skepticism; and if given the opportunity, without asking: 'Who's paying you to say this?'"--Mark Dowie

"This is a great book, and I think you should buy it. But since the point of the book is to think for yourself and not trust experts, perhaps you should thumb through it yourself for a little while. I think of it as a field guide to the kinds of lies you can expect from the information age."--Bill McKibben

"Amusing... meticulously researched... Rampton and Stauber's documentation of PR campaigns proves that they are the real 'experts.'"--Kaja Perina, Brill's Content

SECTION ONE: The Age of Spin

I offer the future of American politics in a couple of quotes make of them what you will I know what they mean.

"America will never be destroyed from the outside. If we falter, and lose our freedoms, it will be because we destroyed ourselves."
Abraham Lincoln

"It is the absolute right of the State to supervise the formation of public opinion."
Josph Goebbels, Nazi propaganda minister

Social Marketing is "the application of marketing technologies developed in the commercial sector to the solution of social problems where the bottom line is behaviour change." It involves: "the analysis, planning, execution and evaluation of programs designed to influence the voluntary behaviour of target audiences to improve their personal welfare and that of society."

HIA provides decision makers with information about how any policy, programme or project may affect the health of people. HIA seeks to influence decision makers to improve the proposal. WHO supports the use of HIA because of its ability to influence policies, programmes and/or projects. This provides a foundation for improved health and wellbeing of people likely to be affected by such proposals

"Fascism is on the march today in America. Millionaires are marching to the tune. It will come in this country unless a strong defense is set up by all liberal and progressive forces... A clique of U.S. industrialists is hell-bent to bring a fascist state to supplant our democratic government, and is working closely with the fascist regime in Germany and Italy. Aboard ship a prominent executive of one of America's largest financial corporations told me point blank that if the progressive trend of the Roosevelt administration continued, he would be ready to take definite action to bring fascism to America."
former ambassador to Germany
William Dodd, 1938

"The job of the President is to set the agenda and the job of the press is to follow the agenda that the leadership sets."
Lawrence Grossman - longtime head of PBS and NBC News

"If you tell a lie big enough and keep repeating it, people will eventually come to believe it. The lie can be maintained only for such time as the State can shield the people from the political, economic and/or military consequences of the lie. It thus becomes vitally important for the State to use all of its powers to repress dissent, for the truth is the mortal enemy of the lie, and thus by extension, the truth is the greatest enemy of the State."
Joseph Goebbels, German Minister of Propaganda, 1933-1945

"What happened was the gradual habituation of the people, little by little, to be governed by surprise, to receiving decisions deliberated in secret; to believing that the situation was so complicated that the government had to act on information which the people could not understand, or so dangerous that, even if people could understand it, it could not be released because of national security ...
To live in the process is absolutely not to notice it -- please try to believe me -- unless one has a much greater degree of political awareness, acuity, than most of us ever had occasion to develop. Each step was so small, so inconsequential, so well explained or, on occasion, regretted.
Believe me this is true. Each act, each occasion is worse than the last, but only a little worse. You wait for the next and the next. You wait for one shocking occasion, thinking that others, when such a shock comes, will join you in resisting somehow.
Suddenly it all comes down, all at once. You see what you are, what you have done, or, more accurately, what you haven't done (for that was all that was required of most of us: that we did nothing) ... You remember everything now, and your heart breaks. Too late. You are compromised beyond repair. "
German professor after World War II describing the rise of Nazism to a journalist

Why are you excluding the "real" experts??? There is just as much politics and jockeying to control things based on OPINION among those people as there is manipulation for profit from from the other folks.