This Earth Day, Let's Scrape off the Greenwash | PR Watch

This Earth Day, Let's Scrape off the Greenwash

Today marks the 38th annual celebration of Earth Day, and once again the event comes with its fair share of PR hype and misleading marketing campaigns. In the spirit of dedicating ourselves to genuine concern for the planet, today is therefore a good time to look carefully at corporate environmental claims, some of which consist more of empty rhetoric than real substance. Companies like Wal-Mart are announcing environmental initiatives. General Electric has its "Ecomagnation" advertising campaign. In Singapore, a shopping center is advertising that customers can "shop to save planet earth" -- and if they buy enough, they might win a new car! The ritual of green hypocrisy frequently requires that companies and politicians redefine environmental progress in increasingly creative ways. Last week, for example, George W. Bush announced a plan to address the problem of global warming by "halting the growth" of U.S. greenhouse gas emissions by the year 2025. Beyond the fact that this target date is 17 years in the future, what really means is that during those 17 years not only will greenhouse gas emissions continue, the amount of those emissions will continue to grow. As columnist Gail Collins observed in the New York Times, this would be akin to having an overweight person announce a plan to achieve "an 18 percent reduction in the rate at which he was gaining weight, to be reached within the next decade." 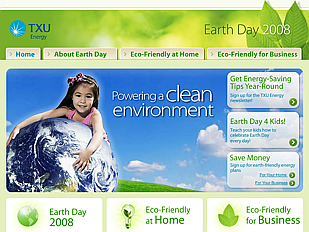 Sheldon Rampton is research director at the Center for Media and Democracy.

Hi, I found a link to the Greenpeace website on http://greenwashspy.com . They seem to be using the link to Greenpeace to promote themselves as a legitimate third party seeking to 'out' greenwashing. This website is actually a front for the PLA lobby. They confess it, if you look deeply enough into the site: http://www.greenwashingspy.com/?page_id=384 The PLA industry (corn based plastic) is composed primarily of Cargill, Inc., disguised as NatureWorks, and ADM. See: http://www.coopamerica.org/programs/responsibleshopper/company.cfm?id=200 And: http://www.coopamerica.org/programs/responsibleshopper/company.cfm?id=187 Interestingly, in order to disguise the real money behind the BPI, none of the above companies appear in the membership list published at: http://www.bpiworld.org/BPI-Public/Members/Directory.html This lobby is clearly behind the California law that equates compostability with biodegradablility, thus giving a boost to the PLA industry. The problem with putting PLA in landfills, I have been informed by a landfill operator, is that it biodegrades so quickly that the methane produced by anaerobic biodegradation in the landfills will escape before the landfills are 'capped and tapped.' The problem with making all plastic disposable items out of corn, which is the usual source of PLA, is that something like 150,000,000 tons of plastic would be made out of corn, driving up prices for corn and leading to a devastating increase in the world hunger problem. Full disclosure: I represent a company that competes with the PLA industry--by choice. We could have become a PLA company just as easily. -Tim Dunn, BioGreen Products Co. http://biogreenproducts.biz A source for biodegradable and oxo-biodegradable plastic disposable items