Mormon Homophobia: Up Close and Personal

The anti-Mormon backlash continues, and some people who have Mormon friends are rising to their defense, including Kaliya Hamlin (also known as "Identity Woman" for her work on issues related to online identity). In a recent blog post, Hamlin complains that "web mobs" are engaged in "blacklisting and subsequent public harassment and targeting of specific people and specific religious groups for their beliefs and support of YES on prop 8." She continues:

I take this personally, I have and do work with people who are Mormon - (When I played water polo in university and in the Identity field). I respect the LDS church and the people in it - they have good values. ...

I think what is going on with the blacklists -- that are directly targeting people in their private life is wrong. I think targeting specific religious institutions for protest is wrong.

These people and these religious institutions are not propagating HATE they are just not agreeing that marriage can be between a man and a man or a woman and a woman. This is a cultural difference of opinion. 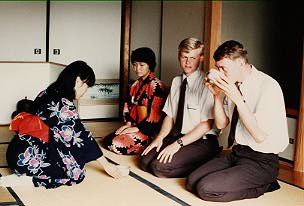 With all due respect, I think Hamlin fails to understand the intensity, seriousness, and yes, hatred underlying Mormon opposition to gay rights. I actually have more personal experience with Mormons than she does. I was raised in a Mormon family and even served a two-year Mormon mission in Japan from 1976 to 1978. Although I no longer believe in or practice its teachings, my extended family includes many active members. It's true that individual Mormons are mostly nice people -- as generous, thoughtful, intelligent and considerate as people from any other religion or belief system. Unfortunately, it is actually possible to possess all of those positive attributes and still promote hatred and intolerance.

From my missionary days, I still own a copy of The Miracle of Forgiveness, a book by Spencer W. Kimball, who was president (and "prophet") of the Mormon Church from 1973 until his death in 1985. The church still promotes Kimball's book and supports its beliefs regarding homosexuality, which he outlined in a chapter titled "Crime Against Nature." It states,

Homosexuality is an ugly sin, repugnant to those who find no temptation in it, as well as to many past offenders who are seeking a way out of its clutches. It is embarrassing and unpleasant as a subject for discussion but because of its prevalence, the need to warn the uninitiated, and the desire to help those who may already be involved in it, it is discussed in this chapter. ...

[P]erhaps as an extension of homosexual practices, men and women have sunk even to seeking sexual satisfaction from animals. ...

All such deviations from normal, proper heterosexual relationships are not merely unnatural but wrong in the sight of God. Like adultery, incest, and bestiality they carried the death penalty under the Mosaic law. ... The law is less severe now, and so regrettably is the community's attitude to those grave sins -- another evidence of the deterioration of society. In some countries the act per se is not even illegal. This "liberalizing" process is reflected in the United States by communities of homosexuals in our larger cities who sponsor demonstrations and draw up petitions to this end, who are formally organized, and who even print their own perverted journals. All this is done in the open, to the detriment alike of impressionable minds, susceptible urges, and our national decency.

Mormon abhorrence of homosexuality is so strong that in the 1970s the church even experimented with aversion therapy at Brigham Young University (BYU), setting up a center where it tried to "cure" homosexuality. The so-called therapy consisted of taping electrodes to the groin, thigh, chest and armpits of gay men and subjecting them to painful electric shocks while showing them pornographic photographs of nude men. The treatments, which were overseen by the head of the university's psychology department, were thought to be "effective in reducing homosexual responsiveness." I happen to know someone who underwent this treatment -- in his case voluntarily, because he was desperately trying to comply with Mormon teachings. However, some cases have been reported of people who were subjected to aversion therapy against their will, or who were pressured into it with threats of expulsion from college. The experience left many with psychological and physical scars, and at least two men reportedly committed suicide shortly after undergoing treatment.

Hamlin says that Mormons have "good values." However, Mormon values are precisely what are on display in Kimball's writings and the actions of the aversion therapists at BYU. And they are core values of Mormonism today. These values are deeply felt and widely believed. They are the basis for Mormon political activism against Proposition 8 in California, and they will undoubtedly continue to drive Mormon political actions against gay rights in the future.

Of course, not all Mormons share this homophobia. There is even a website, MormonsForMarriage.com, devoted to letting "the world know that not all Mormons (LDS church members) oppose gay marriage." However, this view is in the minority and is strongly at odds with the church's official position and numerous pronouncements from church leaders over a period of decades. Matthew Lawrence is only one of hundreds of Mormons who have felt compelled to resign their membership in protest against the church's opposition to gay rights.

The question remains, of course, whether Hamlin is right that supporters of gay rights should refrain from "directly targeting people in their private life" by protesting and arguing with individual Mormons who have participated in the church's anti-gay campaigns. Certainly protesters should refrain from belligerence, threats and intimidation. However, the only way Mormon attitudes are going to change on this issue is through confrontation. (And even then, attitudes will not change easily or quickly.)

On this point, I remember my own experience as a teenager in the 1970s, a time when Mormons continued to cling to another discriminatory value -- the so-called "Negro doctrine" which excluded people of African descent from the Mormon priesthood. As justification for the priesthood ban, a number of pernicious theories were popular in Mormon culture. I own a book from that era titled Mormonism and the Negro (co-authored by a vice president at BYU), which patiently explains that Negroes are "descendants of Cain" and therefore subject to "Cain's curse" because their spirits were "less valiant" than the spirits of white people. (Although I didn't know it at the time, even these ideas were an improvement over the statements of Brigham Young in the 19th century, when he declared as a "law of God" that "If the white man who belongs to the chosen seed mixes his blood with the seed of Cain, the penalty, under the law of God, is death on the spot.")

As a high school student in 1974, I felt privately uncomfortable with the "Negro doctrine," but like many members of the church, I didn't think about it very much. It didn't become a personal thing for me until one day in gym class, when a black kid came up to me and angrily said he had heard that Mormons didn't think blacks like him should go to heaven. What did I think of that? He wanted to know.

Technically, he was wrong about the theological details. Mormons actually believed that blacks could go to heaven. They just couldn't have the priesthood. I tried to make that distinction the basis for a joke to defuse the situation. "No, we think you can go to heaven," I replied. "We just think you don't deserve to." The black kid glared at me for a minute, and that was the end of the conversation. Today, more than 30 years later, I don't remember his name, but I remember the moment very clearly. I imagine he walked away thinking he had wasted his breath by even talking to me. He certainly didn't get a satisfactory reply. But the conversation had an effect on me. It left me feeling profoundly shaken and uncomfortable about a church practice that until then had seemed like a theoretical abstraction of no particular relevance to my own life. Over time, that discomfort helped inform my thinking and changed my attitudes.

There were Mormons and non-Mormons who challenged the Negro doctrine long before I ever heard about it. For most of them, challenging the status quo was unpleasant and sometimes was met with hostility -- all the more so because on that issue, as with the issue of gay rights, Mormons simply did not believe that they were guilty of promoting hatred or discrimination. It took years for attitudes to change on the Negro doctrine, but in 1978 the Mormon Church officially announced a revelation -- from none other than Spencer W. Kimball -- which gave black Mormons the same priesthood rights as everyone else. I remember when it happened. (I was in Japan at the time, knocking on doors and trying to get people to read the Book of Mormon.) Most members of the church were palpably relieved when the Negro doctrine was finally abandoned, but nevertheless it took pressure and personal confrontations to make this change happen.

On an issue like this one, where there are entrenched attitudes and strongly held beliefs, change comes one conversation at a time, haltingly, with discomfort and difficulty. Some Mormons are having those conversations as they discover that members of their own family are gay. Others are now having the conversation thrust upon them as people "target them in their private life" to challenge their political activities. However discomfiting these conversations may be, they need to happen if attitudes are ever to change.