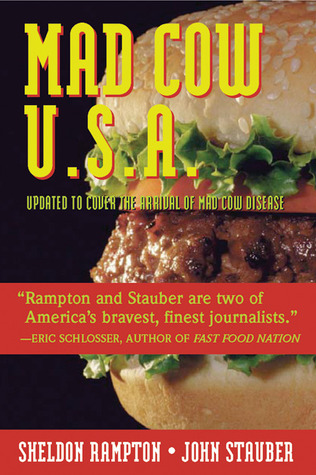 Now in Paperback with a new foreword by the authors

Before there was Fast Food Nation, there was Mad Cow USA. Those who read this book when it first appeared in 1997 were shocked but not surprised on December 23, 2003, when the U.S. Secretary of Agriculture announced that mad cow disease had been found in America. Six years earlier, Stauber and Rampton warned in Mad Cow USA that government and industry in the US had failed to take the necessary steps to prevent this bizarre and deadly dementia disease from spreading through contaminated feed into livestock and humans. The feeding of rendered slaughterhouse waste to livestock, which spreads mad cow disease and created an epidemic in England, continues to be both legal and widespread in the United States. Dairy calves are literally weaned on cattle blood protein in calf milk formula, while government and industry feed the American public a dangerous diet of outright lies, false assurances and deceptive PR.

"Rampton and Stauber are two of America's bravest, finest journalists."

"Most accessible and informative... a lively account... The language is clear and straightforward... Sheldon Rampton and John Stauber tell this larger tale with style, aided by accounts of some richly colourful characters... Their exhaustive exploration of the people, the ideas and the growing understanding of TSEs is thought-provoking... dancing prose."

"Will be received with interest by a large number of readers of different backgrounds and perspectives."

"The kind of book you can't put down. It tells with great clarity a complicated story that interweaves intrigue, horror, massive economic interests, cannibalism, death, and some rather curious science... [The authors] have done the legwork and research necessary to produce a solid accounting of the affliction of mad cow disease, the mess that was made of handling it in Britain, and its implications for the US... required reading."

"In a first-rate piece of investigative journalism, Rampton and Stauber piece together the best synthesis of the problem I've seen. Mad Cow USA is an important book. And it reads like a detective story."

"It's not just cows that are mad--so are our so-called 'consumer protectors.' You'll be mad as hell too after reading this dynamite book."

--Jim Hightower, radio talk show host and author of There's Nothing in the Middle of the Road but Yellow Stripes and Dead Armadillos

"No one who has read Mad Cow USA was the least bit surprised by the discovery of an American cow with BSE."

SECTION ONE: The Burden of Proof

SECTION TWO: The Thing That Eats Your Brain

SECTION THREE: The Interests of Industry

The first time I heard about Mad Cow Disease was in the late 1980s. After I found out basically how it was transmitted in cattle, which was kind of a no brainer, I began to wonder if we were susceptible as well. The disease had already demonstrated it could jump species from scrapple in sheep to cattle. There was no logical reason to believe it could not jump from cattle to human as well. Logic dictated that it would. By 1990, I had already learned one basic truth of government. If they told us the truth, it would set precedent.

In 1990, I began talking to coroners offices in Southern California to find out if they had participated in CJD studies. Several offices admitted they had participated in those studies and confirmed CJD in significant numbers of deceased Dementia patients. CJD evidence was found throughout the US with rates as high as 15% of Dementia patients in some regions. I talked to some close friends in the Agriculture Department at Cal Poly Pomona. I was told that Mad Cow Disease was established in the food chain.

This info was also verified through veterinarians. I was told that the introduction of remnants in the diets of pets has significantly reduced their life span. The average life span of Dogs that did not die of injuries or disease was close to 20 years.

A little humor here. A Mad Cow gets eaten. A Bad Cow gets even. We should call this Bad Cow Disease.

(This is my opinion)
My wife died from mad cow disease in Spokane, WA. back in Nov. 2012. I kept a on going record of the event to include medical tests. Believe me, you do not want to see any-body die from this disease. It is a terrible way to go.
If the government would have done their job this could have been prevented. Instead, they are covering it up.
Mad Cow is a very real epidemic and maybe it is too late to stop it. The doctors told me it is 100% fatal.
If you want more information, my, e-mail is: sailing2004@hotmail.com

I'm very very sorry for your loss. I believe you have confused one prion disease with another. The prion diseases in humans include CJD and variant CJD (vCJD), among several others.
It sounds as if your wife may have had CJD, which can have several causes; and also occurs in the human population sporadically with no known cause, at about the same rate throughout the world. It is a terrible way to die and I am truly sorry for your wife's suffering. Variant CJD (vCJD) is linked with the consumption of tissues from BSE-affected bovines and has not been reported for several years in the USA. There were three cases of vCJD in the USA, all attributable to exposure in the UK or Saudi Arabia. It is a reportable disease. The US government continues to test high-risk bovines for BSE and has only found three cases in the USA. There is no cover-up. Read more on the CDC website: http://www.cdc.gov/ncidod/dvrd/vcjd/qa.htm#UScases Please accept my condolences for the loss of your wife.

My husband's cousin died from this [confirmed diagnosis] 20 years ago. I find the comments about medical transmission very interesting as well. Disclaimers I have read for years state that MCD lives in the CNS and connective tissues of the cows.
Well here's a little known fact for you: if you are having a bone graft : spinal ,jaw bone or otherwise, please note that the standard of care in the USA [at least in the sinus lift I needed] is a Bovine Collagen Sponge matrix infused with Bone Morphogenic Protein as a growth stimulant. If they tried to sterilize the sponge it would melt and the BMP is genetically modified in Hamster Cells[because hamsters & guinea pigs grow teeth non stop] This product is implanted inches from your brain [or spinal cord in back surgery] and has been shown to MIGRATE to a forming fetus, kidneys,& liver or ..... Long term European studies have shown it & calcium biphosphinate [heavily infused w/toxic doses of fluoride] products to grow bone slightly faster than cadaver bone [more expensive & highly sterilized] but also fails around five years so you get to do your expensive implants all over again. Not only a racket for the dentists but may expose you needlessly to bovine & hamster diseases. I went to Costa Rica & got better cheaper care with safer ingredients.