Outsourced Cities, Brought to You by CH2M Hill | PR Watch

Outsourced Cities, Brought to You by CH2M Hill

By Brendan Fischer and Seep Paliwal

When the town of Sandy Springs, Georgia, spun-off from Fulton County and established a brand new government, it didn't sign a Declaration of Independence; it signed a contract.

The 100,000-person town entered into a five-year contract with the for-profit management company CH2M Hill to operate almost all of the town's services: running trash collection, and street cleaning, and wastewater management, and even security and administration for the courthouse. A for-profit company, rather than public officials and public employees, would be in charge of providing all "public" services except for fire and police departments. CH2M HILL employees, wearing Sandy Spring uniforms and driving trucks with Sandy Spring logos, even enforced municipal ordinances like grass-cutting and parking regulations.

Sandy Springs, an affluent suburb of Atlanta -- home to Herman Cain, professional sports players, and the woman who voiced Iphone's Siri -- had been fighting for years to spin-off from Fulton County, with many residents resentful that they were subsidizing services for poorer parts of the county. In 2005, after Republicans gained new majorities in both chambers of the Georgia legislature, Sandy Spring got its wish. The new town -- conceived by retired engineer Oliver Porter, a devotee of Austrian free-market economist Frederich Hayek -- had just a few months to set up a fully-functioning city government, and CH2M Hill stepped in, offering itself up as a one-stop-outsourcing-shop.

In the next two years, the newly-created communities of Johns Creek, Milton, and Chattahoochee Hills -- which, like Sandy Springs, were wealthy suburbs cutting themselves loose from less-affluent counties -- followed suit, signing contracts with CH2M Hill to establish fully outsourced cities. 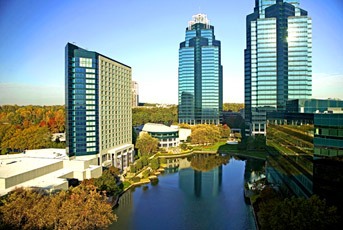 While state and local governments across the country have experimented with privatization, selling off public assets like bridges, roads and parking meters, and outsourcing public services (including those for vulnerable populations), this experiment in "contract cities" is new and shocking to some.

"The decision to outsource the entire bundle of services a municipality provides to its citizens is an extreme form of privatization that we don't see very often," says Shar Habbibi from In the Public Interest a comprehensive resource center on privatization and outsourcing, "For-profit companies are not elected or accountable to the public. Their top priority is their bottom line, not the best interests of citizens. It raises very serious questions of democracy and public accountability."

Indeed, one of the basic elements of accountability is transparency, but CH2M Hill has tried to dodge open records laws. A newspaper in another one of CH2M Hill's company towns, Central, Louisiana, had to file suit to gain access to public records from CH2M Hill, alleging in their lawsuit that, “because the company was functioning as the City of Central and performing sovereign acts on behalf of the city,” it was subject to Louisiana's public records law. Earlier this month, the company settled with the newspaper, with CH2M Hill agreeing to turn over the records.

Privatizing entire towns is just one part of Colorado-based CH2M Hill's business model. For decades, the company, founded in 1946, has been at the forefront of privatizing public services -- and much of its $6.3 billion in annual revenue comes from state and federal taxpayer dollars. 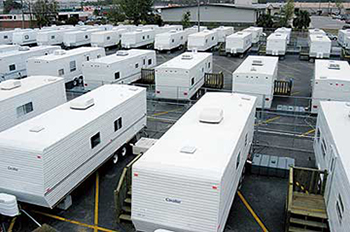 CH2M Hill is one of the federal government's largest and least well-known contractors, receiving billions of dollars for projects like installing wastewater treatment plants Iraq and cleaning up the Gulf Coast after Hurricane Katrina. And it offers an array of services to state and local governments, from water and energy management, to infrastructure and construction.

Those projects have not always gone well.

In 2011, for example, CH2M Hill agreed to a $19 million settlement with the government for over-billing taxpayers for its work at the Hanford Nuclear Reactor site, admitting to federal criminal violations after submitting falsified timecards for work not actually performed. The company also paid $1.5 million to settle allegations that two of its Hanford employees funneled taxpayer funds to companies owned and run by their spouses. It also paid over $600,000 in civil penalties for nuclear safety violations at the facility. CH2M Hill received nearly $1.4 billion in federal stimulus funds to work on the Hanford site, which was the second-largest contract awarded nationally under the Recovery Act of 2009.

After Hurricane Katrina, CH2M Hill was awarded a no-bid contract to install or maintain Federal Emergency Management Agency (FEMA) trailers to provide temporary housing for hurricane victims -- but those trailers later turned out to contain formaldehyde, exposing victims to toxic fumes. In May of 2012, CH2M Hill and three other contractors agreed to pay $5 million to settle a lawsuit brought by the toxic trailer victims.

In East Cleveland, Ohio, CH2M Hill paid consultant Nate Gray as much as $10,000 a month during the period it was operating the city's water system, which Gray used to bribe then-East Cleveland mayor Emmanuel Onunwor, who convinced the city council to award a no-bid, $3.9 million contract for CH2M Hill. In 2002, the same year that Onunwor engineered the no-bid contract, a report by the Ohio State Auditor found CH2M Hill had already failed to deliver on the promises it made to the city, overestimating how much revenue East Cleveland could get from operating the system.

Despite these problems, CH2M Hill has nonetheless continued to land federal and local contracts. Between 1998 and 2013, the company and its employees made nearly $4.8 million in political contributions to federal candidates. At the state level, CH2M Hill has spent nearly $1.2 million from 2003 to 2012 on candidate contributions, party committees, and ballot measures.

The Center for Media and Democracy has documented the take over of public services and public assets as part of its series on privatization housed at a new website: OutsourcingAmericaExposed.org. But the privatization and outsourcing of an entire community is unique.

Even if it worked, the all-out privatization model is not scalable. Sandy Springs and the other communities that have tried it are wealthy enclaves with a big tax base, and few residents requiring social supports or services -- virtual gated communities that have cut themselves off from their less affluent neighbors and contributed to a "two Americas" scenario say experts. The affluent isolate themselves, leaving the poor behind. Plus, much of the savings from any privatization come from paying workers less, further eroding America's middle class.

The four towns that had outsourced with CH2M Hill eventually changed course, finding the CH2M Hill contract and fees too costly during an economic downturn. The Town of Milton, for instance, saved $2 million over two years by dropping the firm, says Milton Communications Manager Jason Wright.

"There is no dissonance when it comes to your allegiance," said Milton's Wright. "You work for the City of Milton. There is not [the] scope of contract that you have to consider. You think of the express goals of Milton."