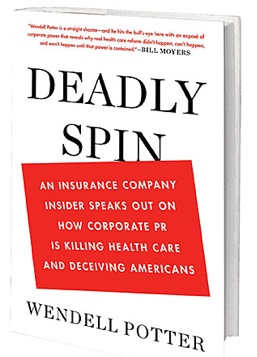 In 2007, Los Angeles transplant surgeon Pauline Chen., M.D. found herself riveted by the case of Nataline Sarkisian, a 17 year old girl desperately in need of a liver transplant. Nataline suffered from recurrent leukemia that required aggressive medical treatment, but the treatment, while successful, had made her liver fail. Doctors recommended a liver transplant, saying it would give Nataline a 65 percent chance of living. Without the transplant, though, her death was certain. Shortly after doctors put Nataline's name on the transplant list, a perfectly-suited liver became available, but then her survival was no longer dependent on her doctors, the hospital or even the new liver that awaited her. It depended upon her health insurer, CIGNA, which denied Nataline's doctors' request to perform the transplant.

At the this difficult time, when Nataline's parents should have been spending their time by their daughter's side comforting and encouraging her, they were forced to leap into action to pressure CIGNA save their daughter's life. They organized rallies, made phone calls, recruited allies and flew to CIGNA's corporate headquarters to try to get funding for their daughter's transplant. By the time two weeks had passed, the public pressure became too much for CIGNA and the company approved the transplant. But it was too late. Two hours later, Nataline died.

The sad story of Nataline Sarkisian is pivotal in Wendell Potter's new book, Deadly Spin, because it was the event that transformed Potter from corporate flak to a human being with a heart. Potter worked as Cigna's highly-paid vice president of public relations, and after living through the Sarkisian PR nightmare, he decided that he no longer had the intestinal fortitude to remain an advocate for America's uniquely cruel system of doling out health care funding.

Dr. Chen, a surgeon who has observed more than 200 successful liver transplants, worked at the University of California, Los Angeles Medical Center where Nataline was a patient while her desperate story played out. Dr. Chen penned a chilling review of Potter's book in the January 6 issue of the New York Times titled, "When Insurers Put Profits Between Doctor and Patient." In her review, Dr. Chen revisits the Sarkisians' story and some of CIGNA's repugnant actions around the case, like hiring a spy to attend Nataline's funeral and bringing on the same big international PR firm to deal with the Sarkisian crisis that they used to discredit Michael Moore's film "Sicko," about America's dysfunctional health care system.

The point of Potter's book, Nataline's story, Dr. Chen's review is the growing recognition that the U.S. employs the wrong business model for its health care system. The goal of America's health insurance system should be to be to heal the sick and keep Americans as healthy as possible -- not to maximize profits at any cost. An insurance system that values profits over lives is a heartless, soul-less system that fails people and becomes the enemy when the sick need it most. "If-you-can-afford-it, you-get-it, and-if-you-can't-you-suffer-and-die" is simply a morally incorrect business model for a national health care system.

Dr. Chen gets it. Potter gets it. The tragedy is that situations like Nataline Sarkisian's have to happen in this country before we push seriously to change the current health care system into one that works for everyone. In the mean time, Potter and the Center for Media and Democracy (CMD) will keep exposing the absurd corporate spin that says we have "the best health care system in the world." Clearly we don't -- far from it, especially if you talk to Nataline Sarkisian's parents -- but if people like Wendell, Dr. Chen, CMD and others keep doing what they are doing, maybe someday we will.

Heath Care in the United States is no longer the best in the world. Just because some people say it isdoes not make it so. The new hwath care bill does need to be changed on some of its regulations and point of service to the public. If heath insurance companies can get family doctors to let heir patients pay a lower copay for visits and testing why should everyone not get the smea benfit. The smea for hosiptal and surgery. Why sure an individual who has insurance pay only 900 dillars for gall bladder surgery and someone without pay five thousand. No matter what doctor sevices are use a copay according to the persons ability to pay should be used. No one should get a free ride. If you only make a thouand a month maybe a 10 or twenty dollar payment for several years for that gall bladder surgery. Maybe a ten or twenty doolar copay to go to the familiy doctor with another ten or twenty for testing. These numbers are only a suggestion. We can have the best health care in the world aagain. No one should die because of the cost. May be in these types of situations the government could require second opinions in addition to the patients doctor. I know there are may out there who are way smarter than me and can come up with even better ways to make the system work even better.
"No one should get a free ride." I couldn't disagree with you more! Like the Puritans of old, you see medicine and health care, indeed anything that isn't painful and hard, as a joy ride. You need to grow up. The way I see it is that first-class health care must be available to everyone regardless of income. And no one should make a profit off of healing other people's illness. The model of medicine-for-profit, For- Profit-Hospitals, and the like, are an absolute immorality. Personally, anything but a government run single payer system is inadequate and wrong. The government has run Social Security Insurance extremely well for a long time. If it had been privatized when Bush wanted to hand Social Security over to Wall Street, every last American would, by now, be Sh*t Out of Luck. We know that Wall Street is nothing more than a bunch of crooks who want to get their hands on Social Security funds. And they want it bad. So they can drain the billions of dollars funding SSI right into their pockets. So the federal government can certainly handle health care as well, and put the For-Profit-Health-Care-Insurance Companies out of business. The young woman who died for lack of timely surgery due to the Insurance Company doing exactly what those insurance companies do best, namely, deny care when it is most needed, gives us a perfect example of a broken system. And the wrong model to start with.