No Time For Flowers | PR Watch

No Time For Flowers 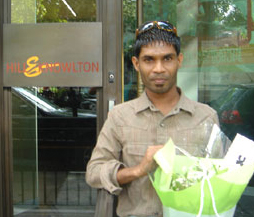 On the second anniversary of the murder of Maldives prisoner Evan Naseem, supporters of democracy in the Maldives went to the London office of Hill & Knowlton, where consultant Tim Fallon handles the account for the repressive government headed by President Gayoom. "We ... asked if we could see Tim Fallon to present him with the flowers. The flowers are in memory of those people that Fallon's client has murdered, tortured and abused over the past 28 years. However, Fallon would not meet us. First we were told that he was not in the building, then we were told he is 'too busy' to see us," said Sara Mahir. On its website, Hill & Knowlton boasts that "we put in place whatever is needed to help get the end result – your success" and that their work for the Maldives government has helped "avert a possible tourism boycott."

Evan Naseem is not a democracy activist. He was jailed for doping. I think it would be better if you speak the truth though he was killed brutally by the police in the Maldives.

Yes, thanks for pointing out my error. I have corrected the original post so that it now refers to Naseem as a prisoner not "democracy activist".