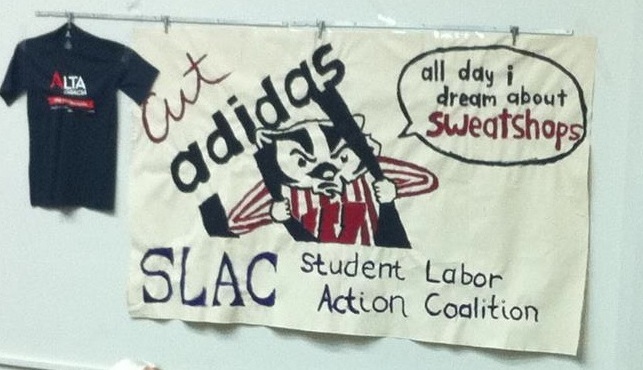 The university filed a complaint against the global sportswear giant in Dane County Circuit Court on July 13 calling on a judge to determine whether the university's code of conduct required Adidas to pay severance and other benefits to nearly 3,000 Indonesian workers. The workers were left jobless and impoverished by a Korean contractor's abrupt exit from Indonesia in January 2011. The lawsuit marks the first time that one of the more than 100 U.S. universities in a national anti-sweatshop consortium has sought to enforce its code in the courts.

The workers, some with more than ten years seniority, earned about 60-cents an hour for producing Adidas apparel that is sold under the university's logo. Wisconsin not only sells the apparel, but is in the middle of a five year $11 million sponsorship agreement with Adidas for exclusive sports team equipment and scholarships. Under that contract, Adidas promises to observe a code of conduct that requires it to take responsibility for remedying violations by contractors and subcontractors. The codes are intended to remake the globally-fractured apparel "supply chain" -- including, in this case, all the factories used for collegiate production by Adidas -- into one unit of brand responsibility. The Indonesian workers were owed an average of $1,000 each in severance due to the closure of factory PT Kizone in an industrial park outside Jakarta. Nike and the Dallas Cowboys, who follow the same code Adidas signed, have agreed to pay more than $1 million to help make the workers whole. But Adidas is a hold out, declaring that "We cannot ourselves assume, or accept, the liability for the severance owed by the former owner of PT Kizone..."

The Worker Rights Consortium (WRC), an independent monitoring organization, concluded that the severance violations had occurred and that Adidas had demonstrated a pattern of the same violation in other factories. "Adidas has knowingly allowed suppliers to shave labor costs," said WRC executive director Scott Nova in an interview with CMD. "And they know the results -- workers are robbed of legally earned income. This is grossly irresponsible and immoral behavior."

Nova said that Adidas has a policy of requiring contractors to create a fund for severance payments, but doesn't enforce it. "It's cheaper for them to allow factories to behave in this manner and shed crocodile tears after the fact than to fix the problem." Nova said that U.S.-based brands have faced university and consumer condemnation for bad labor practices (Nike has even paid a settlement in California for alleged false advertising of fair labor practices) while Adidas' home office in Bavaria isolates the company from criticism. "Adidas has never been as seriously damaged as Nike. They are less sensitive or less apt to believe that they could be subject to reputational harm."

In April, the Indonesian union representing the workers wrote directly to UW-Madison Interim Chancellor David Ward, asking him to take action. The letter noted that workers are unable to meet rent, school fees for children, and cover their food costs. "How can Adidas say it is protecting workers' rights when workers are repeatedly left with nothing when factories close," they wrote.

Wisconsin's Labor Licensing Policy Committee, a student-faculty advisory panel that was created in response to sit-ins in the 1990s by Wisconsin anti-sweatshop activists, asked Ward earlier this year to trigger a contractual 90-day notice of termination of the contract. They hoped that might force Adidas to compensate the Indonesian workers -- and that, in any case, the university shouldn't be doing business with a labor rights violator. Ward ordered contractually required mediation, but announced on July 12 that it had reached an impasse. Vice Chancellor Darrell Bazzell announced on July 13 that the university system's Board of Regents had filed a "declaratory judgment" action against Adidas in Dane County Circuit Court. The university asked the court to interpret the agreement and find that Adidas defaulted on the contract, as concluded by the WRC.

Members of the advisory panel told the chancellor's representatives last week that while the court action could lead to a historic endorsement of codes of conduct to protect worker rights, failure of the legal action or even the extended litigation schedule could further hurt the workers.

Lingran Kong, an undergraduate and a member of the Student Labor Action Coalition, said the university is not taking an aggressive enough position in holding Adidas responsible for the violations. She called for a public statement reiterating UW-Madison's support for the workers. Vice Chancellor Bazzell said that the contract required disputes to be aired in mediation and added that the university had already publicly stated many times its view that the workers had the right to severance payments. Tina Treviño-Murphy, a member of the governing board of the WRC, told CMD after the meeting that the complaints about Adidas' contractors extend to Latin American and other factories. "This is something Adidas does all the time, they are serial human rights violators. Frankly it's not a company our university should continue to have a relationship with."

Adidas' reply in the case is due in early August, but with discovery and motions it could take several months before the case is heard, according to the university counsel's office.

If I put this ad in the Brabants Dagblad a well known news paperI think Nike Adidas and others involved,just might look at more of these practices.
Do let us know at prwatch.org if the newspaper publishes something on the Adidas matter.